"Children's first example of architecture is a family home, but really quickly they're introduced to civic architecture: the school, the library, the museum and the gallery," says Muir. "These memories are really fundamental in terms of how children understand architecture."

"Children's first example of architecture is a family home, but really quickly they're introduced to civic architecture: the school, the library, the museum and the gallery," says Muir. "These memories are really fundamental in terms of how children understand architecture."

"'Quick, the mister's on'," she recalls fondly. "All this screeching and screaming goes on for a minute. They're having a wonderful time [playing in the fine mist spray pumped out in Muir + Openwork's garden installation] and then it all comes to a sudden halt. Then they all just go back to wherever they were in the garden and wait 10 minutes for the next cycle. It's one of my favourite memories of the summer."

How we remember architecture reverberates through Muir's work.

"Children's first example of architecture is a family home, but really quickly they're introduced to civic architecture: the school, the library, the museum and the gallery," says the architect and lecturer. "These memories are really fundamental in terms of how children understand architecture."

For the Australian Institute of Architects award-winning 2018 NGV Architecture Commission, Muir drew on her own childhood memories of Roy Grounds' 1959 design for the NGV, before Mario Bellini's controversial 2004 additions. 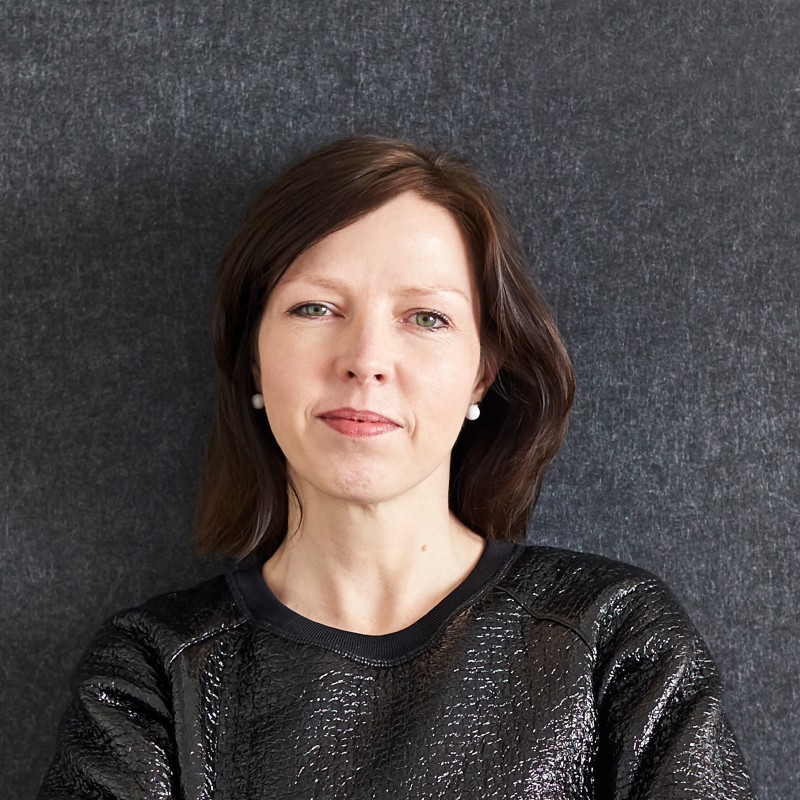 "I remember the bamboo courtyard, but never being able to get into it and wanting to engage," she says. "I remember the acoustics – the clapping timber parquetry – and the compressed spaces that were quite darkly lit upstairs, and of course lying on the floor of the Great Hall looking up at Leonard French's stained glass ceiling."

All these elements were incorporated and abstracted into the NGV Architecture Commission design that she and landscape architect Mark Jacques designed for the gallery's Grollo Equiset garden.

Most architects like to draw. Muir likes to write.

"The purest way I work is write, write, write," she says. "I might do a couple of tiny diagrams but predominantly it's all words. What is particular about that site? What are the nuances? What are the things that you're observing? You can't design unless you understand something. Seeing things for what they are and then breaking that down. What is the problem? What is the brief? How do we understand it? What is the role of precedent and context? It's the process of understanding and questioning particular conditions in order to understand why it is the way it is."

Answering those simple questions assist in arriving at a design solution and be in a position to rigorously defend it. It's an approach she learnt from her mentors at RMIT – Nigel Bertram, Stuart Harrison, Graham Crist and Conrad Hamann – and in turn something she instils in her students.

For the NGV Architecture Commission she and Jacques went back to Grounds' original plans. They confirmed her memories of the gallery: 50 percent of Grounds' original floor area was dedicated to external courtyards - bamboo, sculpture and performance. They also revisited the previous architecture commissions for the garden, in particular the way the previous three commissions (coincidentally also by RMIT Architecture alumni John Wardle, Vivian Mitsogianni and David Neustein) moved from an object on the ground to open walls and spaces within the landscape.

"Memory of place or of a building is disjointed," Muir explains. "It's fragmented. It's not continuous. And it's never in plan or elevation. It's always in perspective. That's just how we remember things. Whose memory is it, is always up for grabs too. How then do we define memory in architectural terms? It too might become quite disjointed." 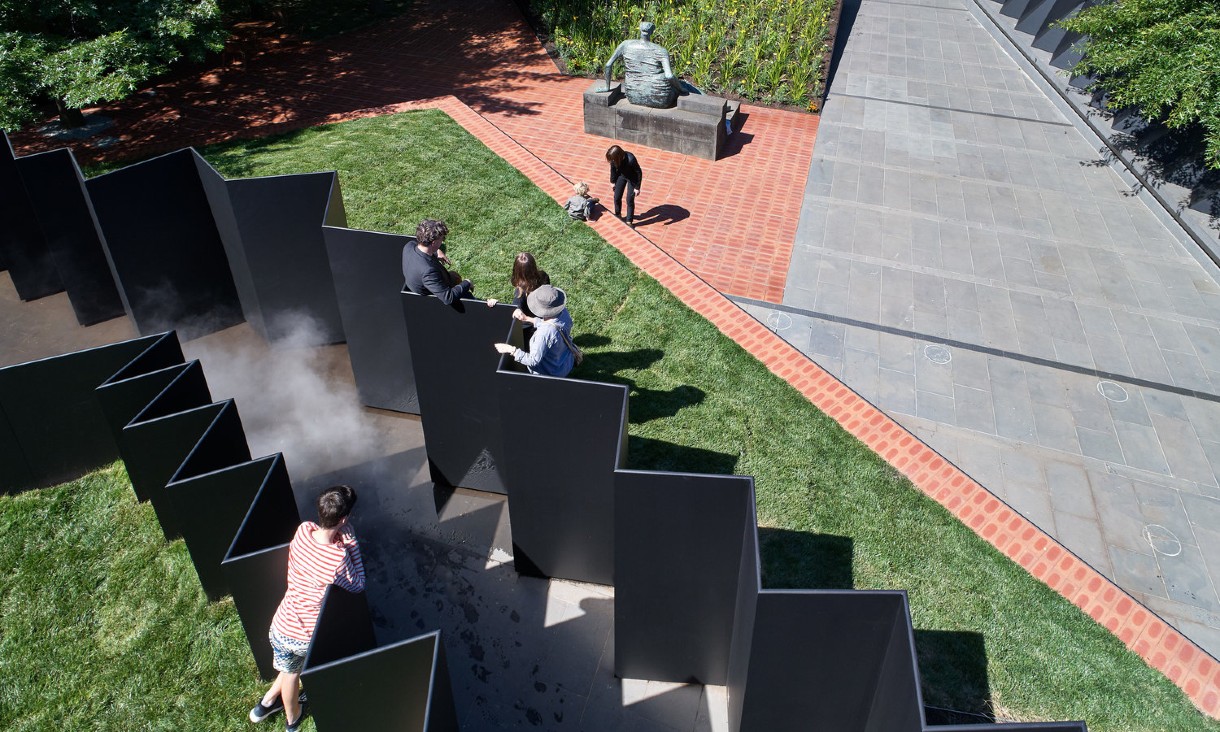 Fittingly, Muir visualises her projects through collage. Fragments of images are compiled and composed from her research, and the most striking and memorable moments observed from the building itself.

"Collage has been quite a fundamental tool for me," she says. "A site is inherently defined by 'rules'; all of these constraints you have to grapple with. Collage is a way of allowing the brain to be devoid of rules and focus purely on a formal outcome. It's a detached thought process, but one that is heavily based on composition and proportion."

Several collages were made for the NGV Commission. Many of them reconfigured Wolfgang Sievers' photographs of Grounds' building, depicting its rich ornate interiors but singular material palette.

"The folds within the facades start to reveal themselves," she explains. "A piece of ceiling here from one of the original interiors, and then of course not forgetting Leonard French's ceiling. These elements start to meet, layer and stitch. The discussions then turned to how these parts could formalise a landscape."

Indeed, the layers of memory and experience loop back to another seminal architectural experience. For Muir, seeing Enrique Miralles and Carme Pinos's Igualada cemetery in Barcelona as a 20 year old student studying interior design, and then, 17 years later, as a qualified architect and teacher, was a revelation.

"It was one of those 'ping' moments and allowed me to understand what architecture could be as a landscape, as an interior, as architecture, as a robust civic intervention, as a utilitarian project that could, over time – which was what was so wonderful going back 17 years later and realising that it was no longer just a cemetery – become a garden. Architecture allowed that to occur."

(Given Igualada's impact, it's not surprising that Muir set cemeteries as a studio project.)

While only temporary, the NGV Architecture Commission aspires to Igualada's multidimensional quality. Muir and Jacques designed a series of rooms and corridors in the garden that can be read as both external and internal or an interior and a landscape. The zigzag form refers to Grounds' clerestory windows. It's not a pavilion, but it offers an architecture of sorts: a structured landscape that defines a space and vice versa. A room can define an embankment.

"Each space provides a varied use or experience," says Muir. "At the rear of the commission, a grassed amphitheatre encourages visitors to climb the embankment to look back towards the building and to observe the garden."

It even has its own bamboo room that pays homage to Grounds' bamboo courtyard. And yet despite the references to his work, there was no intent to make it a Grounds installation, says Muir. "It was more about how we remember a place."

Muir's first building, her award-winning Law Street house, was designed as a memory of both the one bedroom cottage she and her former partner demolished, and the identical row houses in the street.

"The agenda was, how do you remember something that you're erasing? What is the thing that you hang on to? What was unique about the site that could be used as a formal intervention for remembering something? In this instance, the varied roof forms of the existing cottage were particularly unique to that site."

The ramshackle cottage, with its lean-to kitchen, laundry and bathroom, shifting inclines and roof heights, offered a 'kinky' elevation which the architects capitalised on.

"This formed the initial device in order to remember the original house," Muir explains. "The folded ceiling became a memory of what was once there."

Its role was both ornamental and pragmatic, concealing services. Metal cladding solidified the idea.

As the architects' first houset, it was also a pragmatic way of educating themselves.

"If you're only exposed to a site visit every two weeks, you don't necessarily pick up on all the intricacies of construction," she says. "When you're trying to argue for a detail and the builder's saying 'no', how do you know whether or not you or the builder is correct, or is it just coming down to a variation or a cost?"

This hands-on approach governed her active involvement in the Australian Institute of Architects, for which she serves as Victorian President.

"The role is very much about advocating for change and developing policy that supports an industry."

That wider cultural view frames her interest in public projects like the NGV, and current projects she is working on, such as the masterplan redevelopment for The Royal Melbourne Yacht Squadron.

"As architects, you have to ask: what are we contributing?" she says. "And you would always hope that you're contributing to a conversation. There's a rich history and inherent cultural value associated with civic architecture. They are buildings for the people."