In 2017, Christine Phillips and her Oopla practice partner Tania Davidge compiled a dossier for Architecture Australia called 'left of field'. It featured people who'd studied architecture but gone on to do other things. It highlighted how knowledge gained through an architecture education can be applied to other fields.

Oopla fits this model. Neither architect builds, yet both teach, design projects, and actively participate in improving the public realm. For 10 years, Phillips co-hosted the popular public radio show The Architects.

"Everything I do is connected to the place we live, its history and culture," says Phillips, whose PhD was on public swimming pools. "I've always had an interest in public architecture and public spaces."

For the past five years, Phillips has been coordinator of RMIT Architecture's bachelor studios, curating 18 studios each semester. They range from robotics and fabrication to landscape and architecture. Many of her own studios (taken with Stasinos Mantzis) engage with Aboriginal communities.

"Architecture is built on western frameworks," she says. "If we can recognise and celebrate the wonderful knowledge that's been here for over 80,000 years, how might that shift the way we design and practice? It's not something that should be compartmentalised. It's about a shared future."

How long has the Indigenous program been running at RMIT Architecture?

Only the last two or three years. It's still early days, but we have the trust of the Indigenous community.

Framlingham elder Uncle Leonard Clark invited us to work on a music and education facility, which could also be used for music festivals. We're working on a national Indigenous Cultural Centre over the Jolimont rail yards. Our students are coming up with concepts and visuals so clients can take to government - or whichever stakeholders - to help raise money for feasibility studies.

What were some of the approaches to the Federation Square East Indigenous Gallery?

The obvious thing would be to put a great slab over the railyards, but looking at it through an Indigenous lens you can think, how might we draw on other kinds of conditions to inform a new ground? How might you be able to tell stories about Indigenous culture through the way the architecture looks and the way you navigate it?

We had great conversations with the Indigenous curator of ACCA about how Aboriginal galleries might be designed differently, and understanding how Aboriginal artists operate might rethink the way we design a gallery. Rather than one big building, we had lots of outdoor spaces and lots of little buildings underneath a big canopy. If you landscape that whole area, it provides a new connection back to the Yarra, which Federation Square didn't do very well. Should the front face the Yarra? Those kinds of questions.

Students work in teams, and one looked at the growth of the banksia plant (a Victorian native) to generate the form over different stages. Two girls – importantly they are girls – looked at the weaving of eel traps. They used it in a contemporary civic approach to create new connections beyond the site.

We get students to do a lot of research on Aboriginal massacres and understand our heavy history. They used that to create a new topography for the site that became like a landform.

How did they translate that into a landscape?

It was subtle. It is an art gallery and they didn't want it to be a really heavy thing. They generated a process to map it all out.  Some looked at Victoria's lava plains to form a canopy, others looked at traditional Indigenous housing to inspire some of the forms. Everything they draw from has to be transformed into something else, rather than a tokenistic plonking on of symbols.

How do you encourage more Indigenous designers through the university?

One way is to create a culturally safe environment. Quite simply, it means our staff being educated. It requires a level of self-transformation and be willing to make mistakes - and be told you're making mistakes.

How does that work in practice?

Establishing relationships and allowing the relationship to drive the project, rather than having a fixed idea of what a project should be at the outset and working toward that. Being a lot more fluid in thinking and allowing Indigenous partners to lead the way and facilitating that. Learning to sit and listen.

How do you reconcile that with the demand to work faster?

We have to change. The profession already is, very slowly. If we get a reputation for being better equipped within Indigenous communities then [times] will probably come forward. It's an exciting time for architecture.

Are students embracing it?

They love it. Interestingly when I run a studio that foregrounds anything Indigenous, it attracts lots of international students. 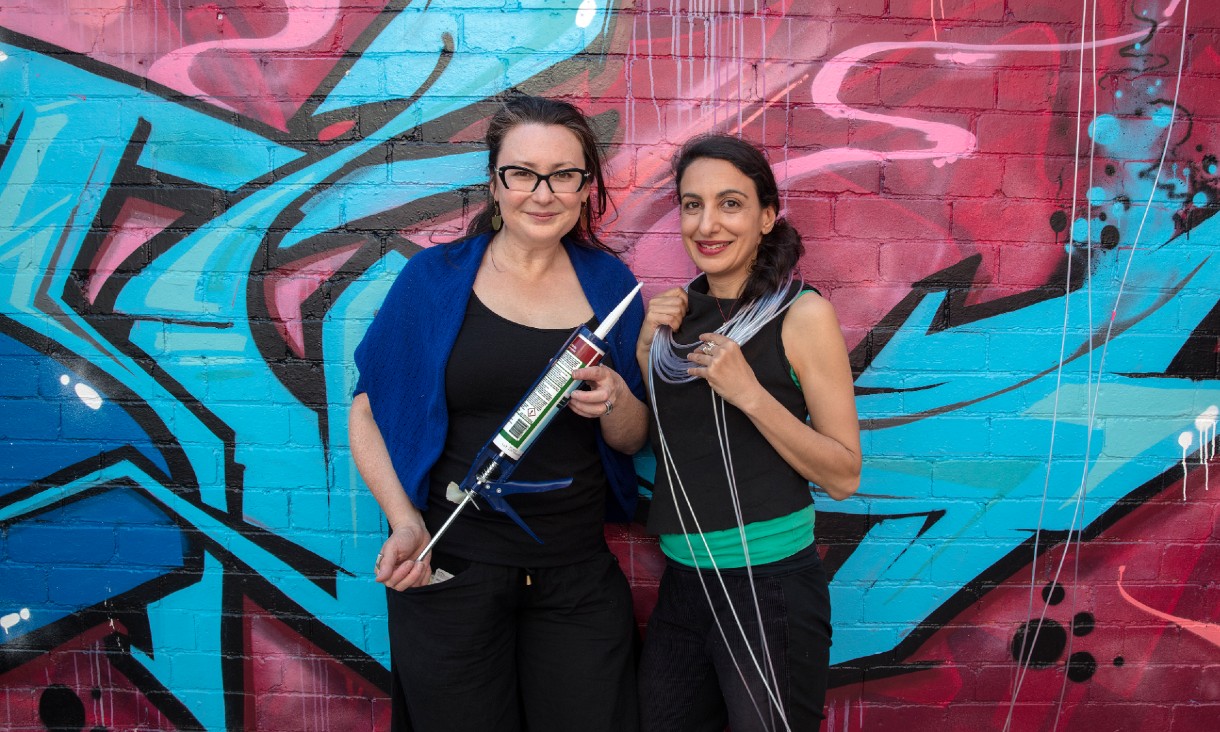 How does your own practice sit alongside your teaching?

Oopla is an acronym for office of political, playful and public architecture. We're interested in how we might be able to engage the broader public with architecture and discussions about the spaces around us.

Why not design buildings?

Because we find smaller projects quite effective ways to get conversations going.

In 2017, we did a little installation called Glow in a St Kilda laneway. It's about drawing attention to spaces through a simple addition of a device. In this case it was lighting. We traced out the graffiti in the walls. This is an optical illusion. When you stand in a particular spot it all comes together as a frame, and as you walk around it splits up.

Urban Tactility at the Immigration Museum opened up discussions around our city in terms of how inclusive or not inclusive it is.

How accessible a city is?

Yes, and to which groups? What prompted it is thinking about how we navigate our cities. We're often rushing around, looking at our phones, we're not paying attention to the smells, sounds, textures. How might we take that very urban everyday object and interpret in a different and playful way. Tactile indicators guide people with low vision. We thought they'd be an interesting wayfinding device to uncover layers within an urban space that we might not ordinarily notice. But it's not designed for people with low vision, it's designed for anyone.

The Immigration Museum courtyard has beautiful stories about immigration. 3,500 tactiles were designed in three different colours. They start together and then meander off to different parts of the courtyard: the memorial wall, where you can stop and feel the names engraved on the wall, another is a commemorative pond, another leads to Indigenous languages embedded into the ground, and that can start a conversation about the many Indigenous languages we have in Victoria.

What does civic architecture need to do?

While we talk about Melbourne as one of the most liveable cities in the world, who is it liveable for? Who is it excluding? And how we might have a city which is more inclusive and better for the general public?

How does Urban Tactility respond to that?

It gets the general public to start to think about how we navigate cities, one of those communities being people with low vision. If we all live a long age, we'll all end up with low vision. Vision Australia is always talking about how most of its clients are ageing people, not people who are born blind. It's going to effect all of us, if we live a long time.