Local Wurundjeri Elders have performed a traditional smoking ceremony in the New Academic Street specialist spaces as part of a Wominjeka (welcome) for the new facilities.

The Wominjeka! to New Academic Street event brought together the traditional and the modern with a traditional smoking ceremony, tour and presentation – informing staff and students about the history of the Kulin Nations, the traditional owners of the land – at the first event inside the brand-new Innovative Design Showcase (IDS).

The event began in Ngarara Place Garden, near the Alumni Courtyard, to reinforce the importance of Aboriginal people’s connection to Country within RMIT University.

While students gathered around, local Wurundjeri Elder Uncle Ian Hunter lit native fresh green gum leaves for the final smoking ceremony of the day – to cleanse the area of negative spirits and to welcome us to the land.

At the first sound of clapsticks, the students fell into a respectful silence and Uncle Ian began his performance of a traditional song, accompanied by Uncle Gnarnayarrahe Waitairi on the didgeridoo.

The song spoke of recognising the land you are on and to be present and aware of the earth beneath your feet.

“It’s where we all start from and all go back into,” Uncle Ian said, rubbing his bare feet in the dirt.

To end the ceremony, the gum leaves were passed around the circle to welcome students.

Uncle Ian then lead the students to Building 12, carrying the smoking bundle, as Uncle Gnarnayarrahe provided a didgeridoo soundscape through to the NAS space. 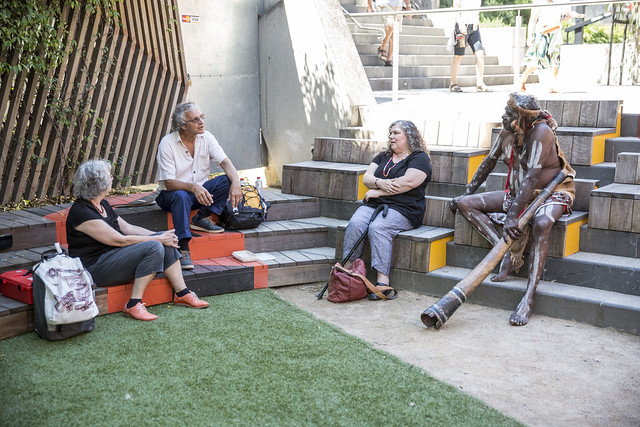 Before entering the new NAS space, students were humbled by the opportunity to place their leaves back into the pile of smouldering leaves held together by native paperbark.

Inside the Innovative Design Showcase, students and staff joined to pay respect to the land of the Kulin Nations, recognising the past, present and future Traditional Owners of the land on which RMIT University – and the New Academic Street precincts – now stand.

The IDS is a multipurpose space which will be used for a range of RMIT student showcases.

While the reveal of the new space generated a lot of excitement among students, Bachelor of Fine Art student, Carol Gardner was particularly excited about the innovative additions.

After welcoming speeches by Project Director Jeremy Elia, Pro Vice-Chancellor Science, Engineering and Health and Vice-President, Professor Peter Coloe, and a performance by Uncle Ian and Uncle Gnarnayarrahe, Janeene Payne, NAS Project Manager and Aboriginal descendant, ended the event with a heartfelt speech about the significance of RMIT’s ties to the Kulin Nations and their land.

“It makes me proud to be a staff member of RMIT,” Payne said.

"And as a mother whose children attend this university, it makes me trust that they are in a place that is culturally safe and culturally sensitive.

"Thank you for allowing us to do what we do today to reconcile with the traditional owners, and to enjoy this fantastic New Academic Street.”

Career change pays off for John

Got a media query?