Capp joined more than 9,000 students – a record number – who marked the transition from student to alumni when they officially became RMIT graduates in front of a crowd of approximately 40,000 people.

The Lord Mayor was presented with a Doctor of Law honoris causa. 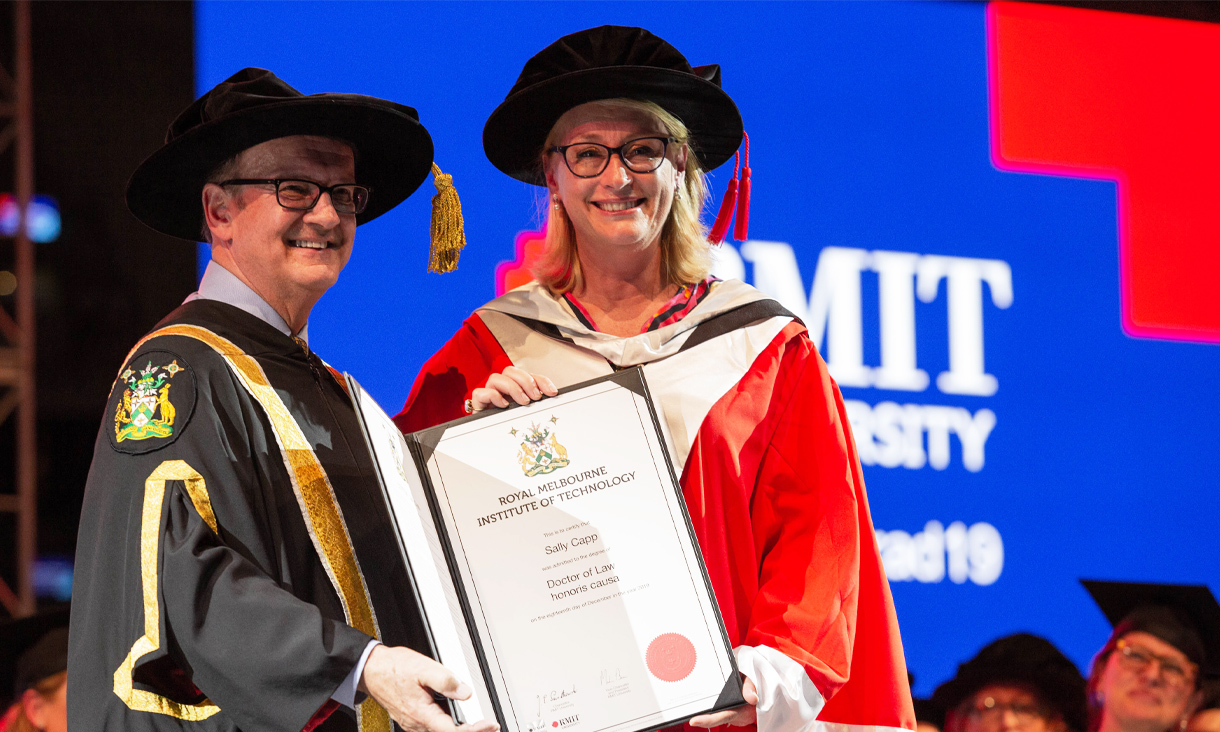 Pro Vice-Chancellor Business and Vice-President Julie Cogin said the Lord Mayor was a respected leader in business and law who had paved the way for women in leadership roles where they were traditionally underrepresented.

“Sally’s passion for people, commitment to social justice and positive change, and strong industry experience have earned her a reputation as a respected leader in business and politics,” Cogin said.

“She is a genuine ground-breaker who embraces the benefits of innovation and is optimistic about the future.

“Along with her many stellar achievements, Sally is a prominent supporter of diversity, making sure Melbourne remains a caring city for all.”

The Lord Mayor said she was honoured to be recognised by a university that is such an important part of Melbourne.

“RMIT has been educating students and preparing them for the workforce for 132 years,” the Lord Mayor said.

“The City of Melbourne’s economy is now worth $100 billion, with the knowledge sector playing a critical role in our continued growth. RMIT has a long tradition of supporting innovation and preparing the next generation of leaders.

“The RMIT community is woven into the fabric of our great city.”

The Lord Mayor encouraged RMIT’s graduate class of 2019 to embrace their chance to help shape the future of the city.

“Think about who we are, what we do, and what we want to be known for,” the Lord Mayor said

“Innovation and embracing new skills to power our economy is important but our values will be crucial in determining our success as a city.”

The celebrations kicked off this morning with RMIT’s iconic graduation parade, which saw more than 5,000 students in academic dress walk down Swanston Street with friends and family watching on.

Vice-Chancellor and President Martin Bean CBE and RMIT staff joined the parade and the group was met at Federation Square by RMIT Chancellor Dr Ziggy Switkowski AO and the Lord Mayor.

They started the EMBA together only six months after they started dating, and now – four years, a wedding and a baby girl later – said it was euphoric to finally graduate.

“We’ve both sacrificed a lot, but it really felt worth it in the end – it’s a real achievement for both of us,” Brent said.

But as the impact of the Syrian crisis grew, she had no choice but to quit study and save her life, fleeing to Australia with her family.

“When I first arrived everything was challenging and I had to start from scratch,” she said.

“But seeing my country fall into chaos and war only intensified my desire to pursue study and a career in the medical field.”