A remarkable group of alumni is providing thought leadership and driving activism and collaboration within the architectural profession. 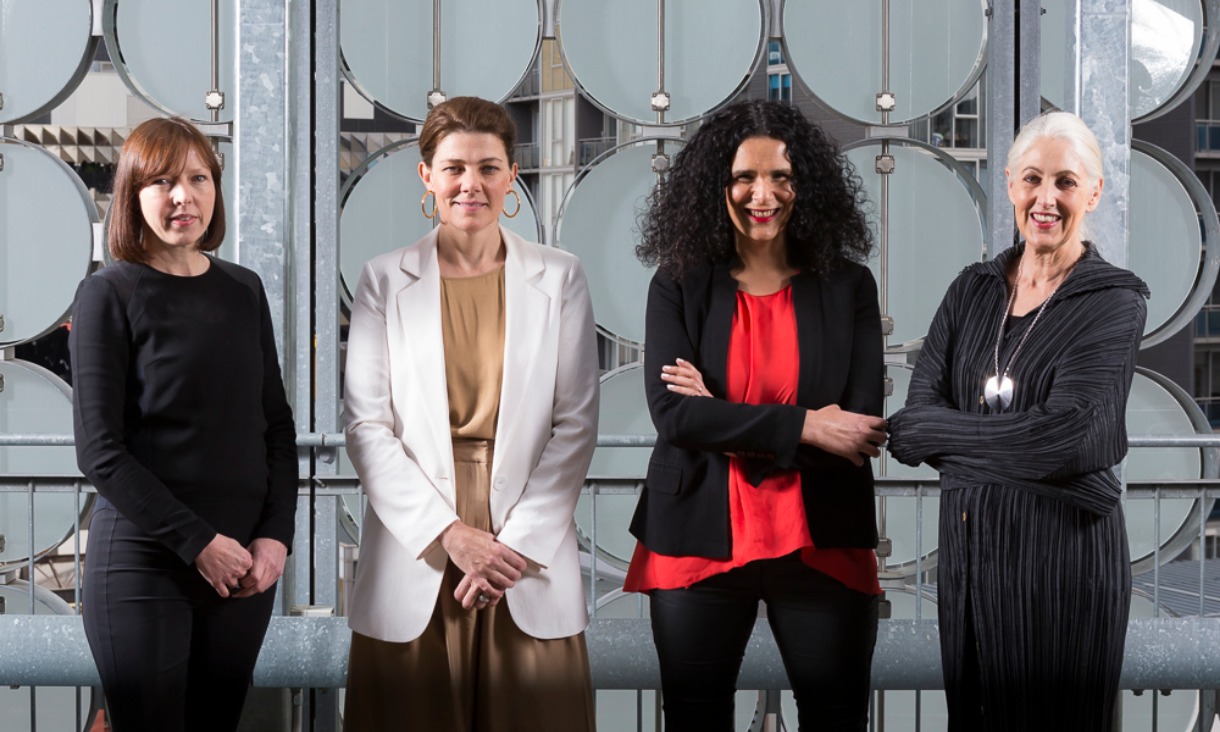 Clare Cousins, National President of the Australian Institute of Architects (AIA), Amy Muir, Victorian Chapter President of the AIA and RMIT Architecture tutor, and Jill Garner, Victorian Government Architect are all award-winning practitioners and key voices in debates around the direction of our cities and the health of our built environment.

It is the first time that RMIT alumni and / or staff have held all three prominent leadership roles in professional practice at the same time.

Conditions in the highly sought-after Architecture program have proven the perfect breeding ground for professionals who not only excel in their own practice but are equipped to take the step up to lead the profession.

According to Architecture Discipline Leader Professor Vivian Mitsogianni, the winning formula can be attributed to the school’s encouragement of experimentation and development of new approaches as well as its direct links into the profession, providing a clear alignment between design and professional practice. Mitsogianni is herself an AIA award winning architect.

‘Amy Muir is a great example. Amy has been our Professional Practice coordinator, she is a venturous designer who runs her own practice and she is the Victorian Chapter President of the Australian Institute of Architects (AIA),” Mitsogianni said.

“This combination of a focus on progressive design, direct engagement with the profession and professional practice and deep understanding of industry is core at RMIT and invaluable for student to have access to.”

Some common themes emerged from a recent discussion at the School of Architecture & Urban Design, including the desire for more collaboration within the profession and with associated agencies, the importance of advocacy and the problem of novation.

Cousins said the President’s role was invariably a busy one, supporting its members and responding to issues, but that it was far broader than people might think.

“It’s very much more altruistic than that; it’s equally about how we advocate for what’s best for the built environment – whether that be public infrastructure, affordable housing or climate change policy,” Cousins said.

“I’m excited when topical issues not only engage the profession but also communities and the public. I think that’s one of our biggest areas of growth – how can we better advocate the power of architecture and the benefit architects bring? When there are topical household issues, it helps put architects in the media.”

She referred to the 2018 furore surrounding the Sydney Opera House illumination and the Federal Government’s redevelopment plans for the war memorial in Canberra as prime examples of the need to advocate for the protection of ‘new heritage’ particularly with public buildings.

“We are keen to see high quality affordable housing units delivered nationally in various models. It is essential for architects to co-deliver these projects to ensure that design-thinking is embed in projects from the beginning. Too often the focus is on speed and cost, however housing should be ecologically and socially sustainable to provide liveable environments for people.

“When there are issues like this it gives us an opportunity to be thought-leaders and our opinion is sought.”

Muir’s advocacy work in the role has included taking a lead on issues including the Better Apartment Standards and the proposed amendments to the Melbourne Planning Scheme that propose a new approach to urban design policy.

Reflecting on her time in the state president role Muir said the chance to put systems in place for better collaboration that benefits the industry is one of her key achievements.

“There are many opportunities to find a voice, and one of the things I’ve been doing in the role is finding mechanisms for having common conversations with varying industry bodies,” Muir said.

“We meet regularly with the Office of the Victorian Government Architect and with the Planning Institute (PIA) and the Australian Institute of Landscape Architects (AILA) ensuring there is dialogue between the varying bodies and with government. The objective has been to strengthen these relationships, and be able to advocate to government on specific issues.”

In 2017 the Institute reintroduced the Large Practice Forum which brings together large practices within Melbourne to collectively discuss the main issues that they are dealing with from a project delivery perspective.  It’s a sensitive area, with high stakes involved, but Muir said there are key area of commonality.

“Novation [transfer of the relationship between the client and the architect to the developer] is one of the major issues they are all battling with and we recognise that it is not just an industry-based condition: it is far reaching and has a knock-on effect to the major contractors, how the government are procuring projects and the quality of our built environment.

“We’re looking at how we can widen that conversation across the industry and then go back to government and present them with evidence to support reform and much needed change,” she said.

“One of the best things about my role is realising that there are many areas and issues that you can touch and understanding where everyone is sitting in relation to these. Finding strategies for us all to be working together in order to strengthen our numbers and collective voice is imperative in assisting with advocating and making change.”

Garner admits that she knew little about the role of the Office of the Victorian Government Architect when she was approached to join the office (first as Associate, then as Government Architect in 2015), but suggests that her specialisation in small scale public buildings had given her valuable experience working in the public realm.

“One of the things I have brought to the role is an interest in seeing the discipline of architecture as not being about designing a fabulous object that floats in space, but about designing something with a place and a public syllabus,” Garner said.

“There is great responsibility in the proposition that we should not build something that potentially needs to be replaced in 10 years, but designing something that becomes a legacy to where it is being built.

“When government is a client of design in the public realm, we must put that lens over it; we must consider, am I going to be pleased and proud of my city / regional centre / suburb forever,” she said.

Garner said it was a vastly different experience to sitting in the office and designing a beautiful response to a brief. Agitator, collaborator, influencer – it’s ultimately part of her role to facilitate within government to get the right project aspiration and the right architect for each particular job.

“It’s getting into the room, around the table where decisions are made, involved in processes. I need to be in a position to suggest, maybe that’s not the best way to do this project, perhaps we might influence this vision in some way, or maybe we could embed the word ‘design’ in your brief?

“Getting that message out, trying to find champions who aren’t even from an architecture or design background and convincing them that the design talents of our industry (including landscape architects, urban designers and, to a lesser extent, planners) are needed to throw a multi-disciplinary lens over these projects.”

“It’s been an incredible learning curve for me and it’s often tiny wins, but every now and again someone quotes my words back to me, ‘you know, this is not a civil engineering job, this is a job about place’. That’s very gratifying.”

RMIT’s CBD North campus will be the focus of a new urban renewal project thanks to a $44.6m Victorian Government investment.

RMIT has ranked 206th in the latest QS World University Rankings, consolidating its reputation as a global leader in education and research.