Students have represented RMIT in Air conditioning and Refrigeration, IT Networks Systems Administration and Additive Manufacturing at the WorldSkills regional competitions.

WorldSkills is an international organisation dedicated to raising the profile and recognition of skilled people and showing how important skills are in achieving economic growth and personal success.

WorldSkills Australia has been running regional competitions across Australia throughout 2022, and RMIT VE students have been seizing the opportunity to test their skills and knowledge in their chosen field against their peers.

They had three modules to complete which involved installation and fault finding. In the end, three RMIT were placed in the top three. 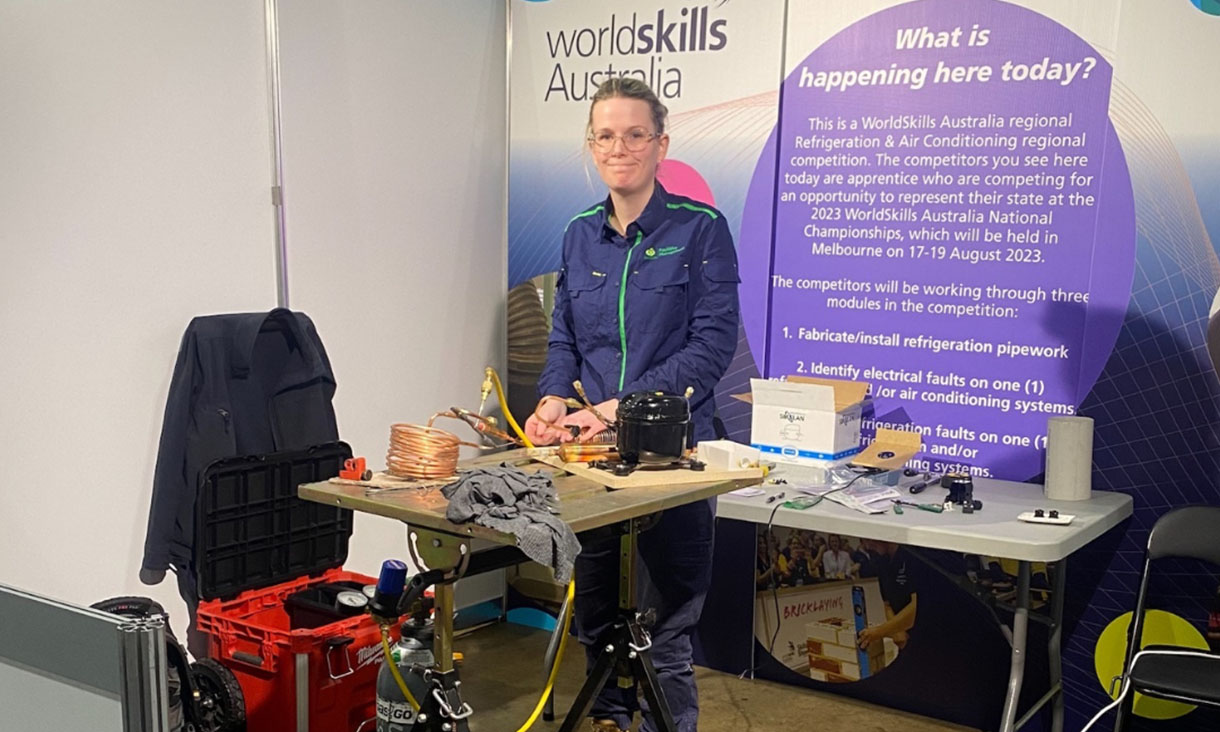 Naomi Kelly and her fellow competitors had to build a can cooler refrigeration system and fault-find two systems.

Naomi is studying for a Certificate III in Air-conditioning and Refrigeration and was profiled earlier in the year as Woolworths’ first female refrigeration technician apprentice.

She was asked by her teachers to compete in the WorldSkills competition as a way of practicing an accumulation of skills learnt in class, with extra support from her tutors where she needed improvement.

Naomi said she enjoyed the networking aspect of competing as well.

“The competition was a good experience as it allowed me to interact with lots of people across my industry to build relationships,” she said.

“For any students interested in competing, I definitely think they should take on the challenge, but remember to ask your teachers for insight on where you can improve.”

The competition required them to create a network representing a small-to-medium enterprise using a virtual environment.

Ultimately, three RMIT students placed first, second and third in the regional rounds, and second, fifth and sixth in the state finals.

Luke Eberbach, the Program Manager for Information and Communication Technologies (ICT) programs in the College of VE, says the WorldSkills competitions are a terrific way for students to showcase their skills whilst representing the RMIT ICT and Cyber Security programs.

“WorldSkills enables students to compete in a friendly environment and learn new skills along the way," he said.

Jay Polandaya, a Cyber Security and Networking teacher in the College of VE, assisted in supporting the students who competed in the IT Network Systems Administration competition.

He has also been selected as the chief Judge and National Convenor for the Regional and National competitions for the Cloud Computing and ICT clusters.

“WorldSkills not only showcases the technical skills and talents of our students, but also shows that our courses reflect the industry standard in these areas.

“We have already had students that qualify for the IT Network Systems Administration National competition next year and we are hoping to also qualify and win the Cloud Computing competition on 14 October,” he said.

The competition consisted of projects related to the use of digital technologies as a transformative approach to enable the creation of lighter, stronger parts and systems. The competition also aimed to evaluate skills and abilities in the 3D area, such as 3D printing.

Advanced Diploma of Engineering (Mechanical) student MacKenzie Murray placed second in the competition and credited her teachers for inspiring her to get involved, as well as preparing her by going in-depth on tricks in the solidworks software.

From this competition alone, I learnt a whole lot of new things about additive manufacturing.

The competition was held at RMIT’s Advanced Manufacturing Precinct.

Murray also really enjoyed receiving feedback from people who had been in the industry for years.

“It was a good break from the classroom, but it still prepared me for the industry because the assessors gave useful feedback and taught us some new tricks.

“It will also look good on my resume and help with getting jobs in the industry.”

The students who placed well in the Air conditioning and Refrigeration and the Additive Manufacturing regional competitions are eligible to be invited to compete at the 2023 WorldSkills Australia National Championships.

The four students who placed in the Industry 4.0 World Skills competition have the chance to be selected for the next round of competing.