Liora | Exchange to Amsterdam University of Applied Sciences, The Netherlands

Liora | Exchange to Amsterdam University of Applied Sciences, The Netherlands 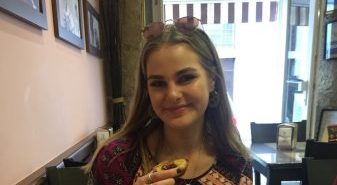 Liora went on exchange to Amsterdam University of Applied Sciences in The Netherlands. She writes:

When I left Melbourne, I told people I was going to ‘study’ in Amsterdam. But upon return, I now say I ‘lived’ in Amsterdam. I rode a bike everywhere for five months, I celebrated Sinterklaas and ate speculaas and kruidnoten. I learnt to give directions in Dutch and found myself ringing my bell at tourists walking in the bike lane. I lived among my Dutch classmates, I wrote about and experienced Dutch culture, beyond the canals and the red light district. I had my local places and routine. And each time I returned from a trip, the familiar sound of Dutch felt like home.

Amsterdam University of Applied Sciences, located close to the city centre and near beautiful canals, is a wonderful place to learn. The studying style is very independent, and a little more practical than I was used to, but also really enjoyable. I was constantly writing stories, doing interviews, researching or creating. My skills have improved tremendously, not to mention my confidence. Being forced to just find a story in a European city with no contacts makes you a better journalist.

My skills have improved tremendously, not to mention my confidence. Being forced to just find a story in a European city with no contacts makes you a better journalist.

The best part about studying and living in Amsterdam is the city itself. I cannot fault it in any way but the weather – and hey, live there long enough and it’ll seem normal to always just be a little damp. The other amazing thing about it is the location because it’s almost too easy to explore the continent. Over my five months, I visited 12 other European countries.

Another part of this great experience were the two study trips I went on to Edinburgh and Barcelona, The last one was actually held at the RMIT Europe office, which was amazing. By day we toured media outlets and acted as international correspondents and by night we enjoyed the cities.

To prospective students I would say to just go for it. You will meet the most incredible people, be inspired and feel like the luckiest person in the world every single day. I can’t imagine that anyone could possible regret this experience and the only downside is having to leave at the end.