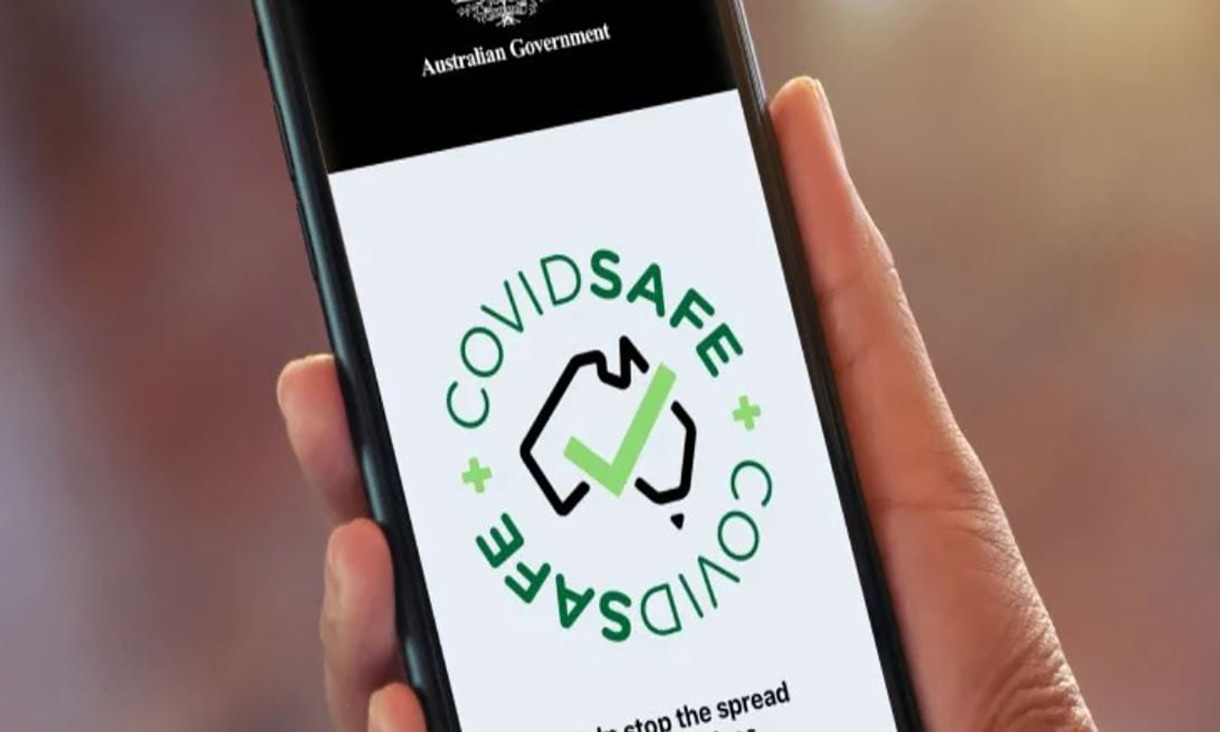 On ceasing COVIDSafe, health minister Mark Butler said the “Albanese government acted to delete the wasteful and ineffective COVIDSafe app” and accused the former government of wasting “more than $21 million of taxpayer’s money on this failed app”.

Was COVIDSafe a magic bullet, as per the previous government, or a total failure, as the current government wants us to believe?

The writing was on the wall

Rewind to the first months of the pandemic, and Australians were encouraged by then prime minister Scott Morrison to download the app, which he compared to putting on sunscreen when going outdoors and a “ticket to opening up our economy”.

To some, it was clear already in 2020 the app wasn’t going to achieve expectations. It also disappeared from politicians’ vocabularies, and there were mounting calls to scrap it in 2021.

Overall, the decommissioning of the app this week shouldn’t come as a surprise – there was also a strict sunset clause put into law when it was first developed. 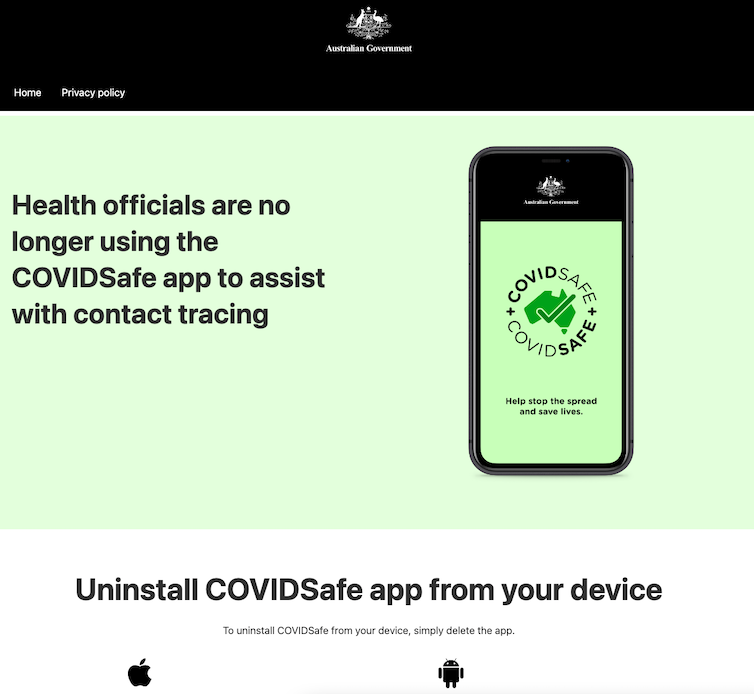 The COVIDsafe website has been updated to urge users to uninstall the app. covidsafe.gov.au

But is there a silver lining – can we learn anything from the COVIDSafe experiment? Here is our scorecard.

Some passes, some fails

At the start of the COVID-19 pandemic, most public health systems relied on manual contact tracing, a tool many thought at first would be ineffective for managing and controlling a rapidly spreading disease on a large scale.

One of the goals of COVIDSafe was to automate the manual work, to help the efforts of contact tracers at scale. This goal was achieved, although the value and effectiveness are questionable, as we discuss below.

Few systems have needed rapid and widespread adoption to the extent that COVIDSafe did. The app did reach the initial expected target threshold of 40%. There were more than 7.7 million downloads, with 3 million Australians downloading the app by the end of April 2020.

Getting so many Australians to download new and contested technology is an unparalleled achievement. While the number of downloads doesn’t tell us how many people were actively using the app, it shows some success in getting people to at least download and engage with it.

A significant challenge was also to make the app accessible to a wide range of people with varying levels of tech aptitude. Despite its questionable effectiveness, technical and registration issues, COVIDSafe struck a balance between being aesthetic and relatively easy to use.

FAIL: Improving the efficiency and accuracy of contact tracing

The COVIDSafe app only helped to identify two positive cases not reported by manual contact tracing. This can be partly attributed to the success of Australia’s suppression strategy – low case numbers in 2020 meant the app was not fully tested “in the wild”.

As of November 2021, only 792 COVID-positive COVIDSafe users consented to upload their data to the national database. Australian states also introduced QR code scanning at public places (such as transport, shops, sport venues, cafes, hotels and restaurants) that overlapped with the role of the app.

Independent evaluation suggests that COVIDSafe was “an additional step that increased workload [for contact tracing staff] without delivering any added value”.

FAIL: Easing restrictions, opening the economy, and returning to ‘normal’

The Morrison government framed COVIDSafe as an integral part of its plan to remove restrictions imposed on society and open the economy. COVIDSafe failed to deliver on this, as much of Australia continued to face tough restrictions and remained in lockdowns until late 2021.

FAIL: Suppressing COVID-19 and its spread

Another widely popularised goal of COVIDSafe was controlling the spread of the disease. Despite early optimism around such apps, this goal was not achieved.

It was unrealistic to expect a contact-tracing app to suppress the spread of a virus whose epidemiological characteristics evolve over time.

Lessons for the future

Getting systems right is a process. Understanding the failures and successes of COVIDSafe is a useful starting point to advance the conversation on what “digital contact tracing 2.0” should look like.

A techno-optimism ideology – the idea that there’s a tech solution for every complex problem – was at the root of developing COVIDSafe in the first place. Officials used metaphors such as “digital vaccine”, “sunscreen” and “road to recovery”, suggesting the app would protect individuals from being infected and return life back to “normal”.

In developing health applications, government should use “digital also” instead of a “digital first” approach. Health apps, especially new and rapidly deployed ones, should not be conflated with medical solutions. Otherwise, we risk unrealistic expectations and loss of public trust.

COVIDSafe showed that digitalising a manual contact-tracing process doesn’t necessarily make it more effective. In a July 2021 report to parliament, then health minister Greg Hunt admitted “the use of existing, well established tracing processes has limited the need of public health officials to rely on COVIDSafe”.

When defining the scope and purpose of an app, we need a better understanding of everyone’s requirements and existing manual processes.

As COVIDSafe was developed and launched, much attention was lavished on privacy concerns, Bluetooth connectivity, accessibility and mass acceptance.

But it seems less attention was given to the needs of public health staff. The app complicated the work of contact tracers who were quickly overwhelmed by data volume. Public health staff should be provided with effective tools to manage incoming data; in this case, it would have helped to figure out which encounters needed to be checked for potential close contacts.

Privacy considerations were central in the development of COVIDSafe, with a range of measures applied across the actual app, its legislation and its use.

Future apps should be developed to give people control over the collection and sharing of their mobility data, so users can select appropriate options according to their personal privacy preferences.

So, was COVIDSafe worth the investment?

Australia was not the only country to develop a contact-tracing app. Several German-speaking countries, France, India and Singapore developed similar apps with varied success, while the United Kingdom, Italy, Latvia and others made us of the exposure notification system Apple and Google developed.

COVIDSafe reflects the urgency of early 2020 and the strong support for such technology from epidemiologists and other medical professionals.

It was also a bit like taking out an insurance policy we didn’t fully need: initial public acceptance did not align with low positive case numbers. It’s unclear whether a similar app deployed in 2022 would have led to a different outcome.

Overall, it is hard to expect a financial return on such emergency investment. The app gave some people hope and comfort during the dark periods of 2020, arguably delivering a social return on investment.