Opening up the outdoors for Aussie wheelchair users 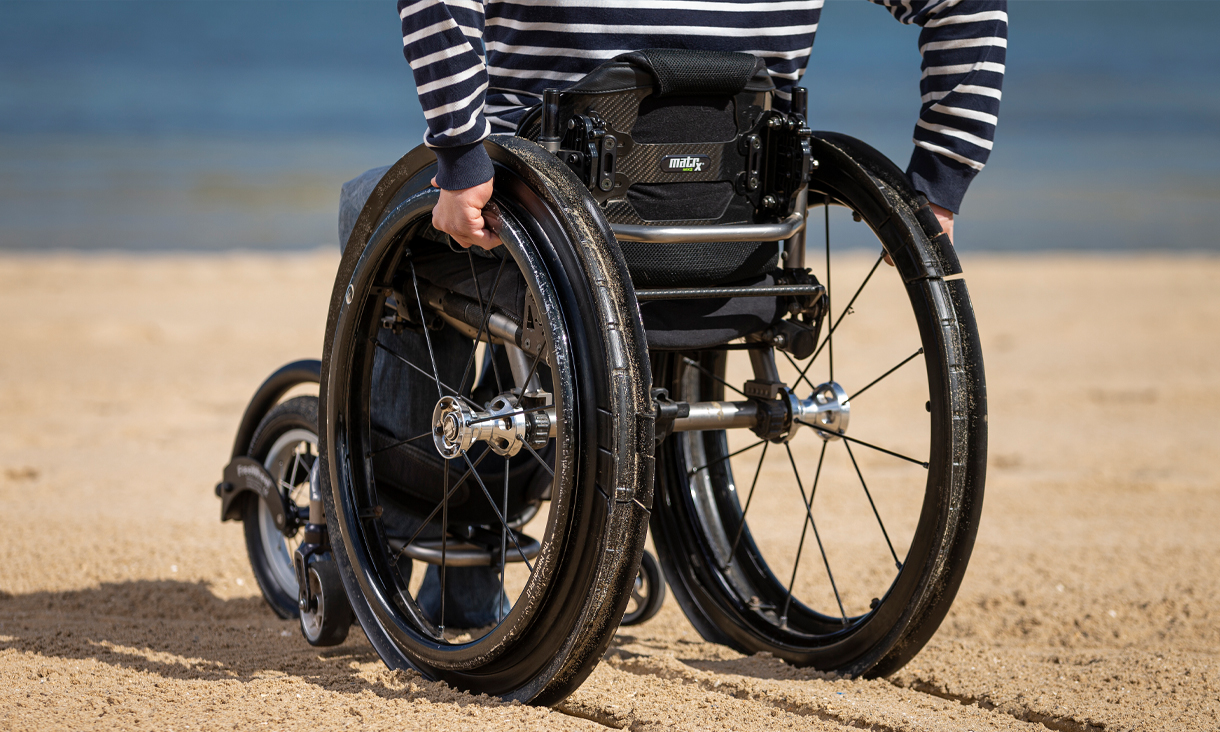 Opening up the outdoors for Aussie wheelchair users

An RMIT graduate has won the national James Dyson award for his invention of a portable and affordable accessory that allows manual wheelchair users to access any terrain, anywhere, anytime.

Australia is renowned for its beautiful natural landscapes, but it can be difficult for manual wheelchair users to make the most of the great outdoors. 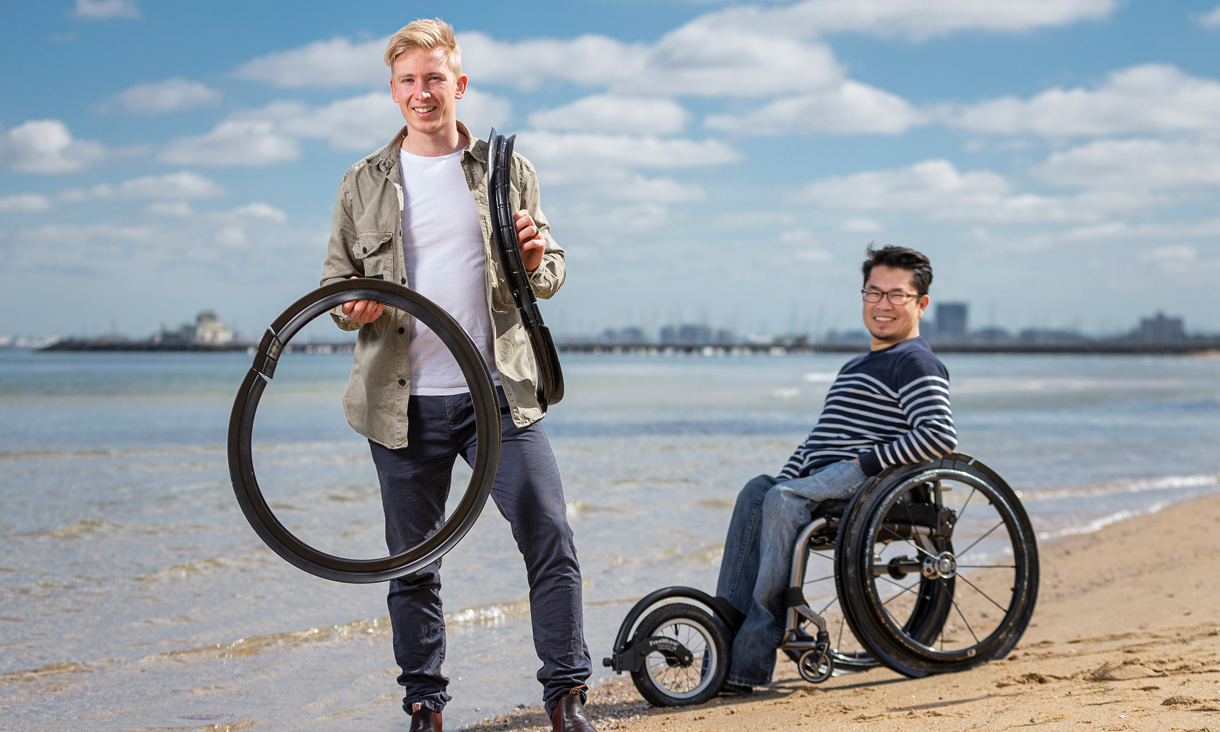 He said he was inspired by one of his close friends and now business partner, Huy Nguyen, a long-term wheelchair user who would often get stuck in stand when visiting beaches.

“I knew there had to be a better way to allow wheelchair users to manoeuvre around off-road tracks,” he said.

“Current off-road wheelchairs and accessories are either really expensive or bulky. I wanted to build something that was far more accessible and offered the user a more independent experience.”

Designed as part of his final-year Honours project, the design features polyurethane tires that fit over standard wheelchair wheels to stop them getting bogged.  He took inspiration from the way gecko’s feet spread out and increase their surface area to stick to rough terrain. 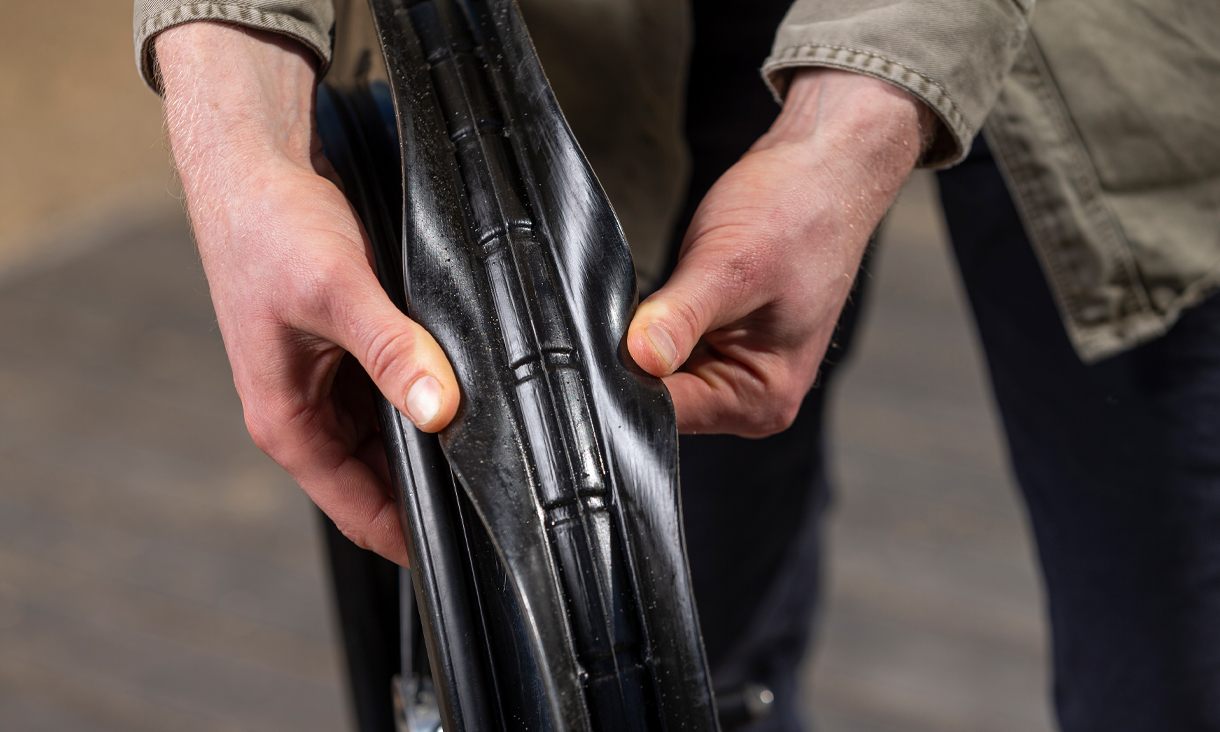 A set of Gecko Traxx tires is small and portable, packing up into a small bag, and can be fitted to any standard wheelchair even while the user is seated, allowing them to be ready for any terrain.

The design recently beat 30 entries from universities around the country to take out the coveted Australian National James Dyson Award.

Tilley said it was exciting for his design to be recognised by the international design competition, which gives budding inventors a chance to make a name for themselves on a global stage.

He gave his advice for student designers considering entering.

“For any young designer with an idea, go for it, get your idea out there. The recognition from such a respected company is huge and it’s an amazing opportunity,” he said.

Tilley will receive a cash prize for his winning entry and, alongside two Australian runners-up, will progress to the international stage of the James Dyson Award, with the hope of being selected the international winner in November.

University of Sydney Professor Salah Sukkarieh, one of the Australian judges, said Gecko Traxx was a clear winner for him.

“It’s a simple yet effective design which addressed every aspect of the brief. It’s commercially viable, innovative and most importantly it could help people all over the world,” he said.

The project also took out the Next Gen category Award at Australia’s Good Design Awards in July, and was featured on the latest season of Australia by Design – Innovations, in a segment hosted by RMIT design student Alè Anastasiou.

Since graduating, Tilley has turned Gecko Traxx into a full-time project, with the support of the Melbourne Accelerator Program.

He said he’s now focused on the finalising the launch of the product, which is set to be available online and in stores around Australia by the end of the year, and has his sights set on the international market.

“We see it as the first product of a whole range, that focuses on allowing wheelchair users to explore the great outdoors, something that many of us take for granted.”

Sound, animation and AI installation to feature at Experimenta exhibition

A team from RMIT’s Master of Animation, Games and Interactivity will have their project exhibited as part of Experimenta Life Forms: International Triennial of Media Art.