SARS-CoV-2, the virus that causes COVID-19, is changing how we live. With a rapid increase in cases, we are now isolating in our homes to “flatten the curve”.

However, it will be nearly impossible to eradicate the virus simultaneously all around the world. And when we do emerge from isolation, the virus could potentially re-establish itself.

Our best chance to keep it in check in the future will be to develop a vaccine.

Australia’s CSIRO has just begun testing two new vaccine candidates. These are just two of many potential vaccines that scientists are working on around the world.

All vaccines must contain two components:

The adjuvant must be mixed with the antigen to activate an immune response. But you can’t induce any old immune response – you must trigger the right type of response for the infection you’re targeting.

Researchers divide immune responses broadly into those that make:

Adjuvants and antigens are selected to induce antibody and/or T cell responses to ensure we have the right kind of immune response against the right target. 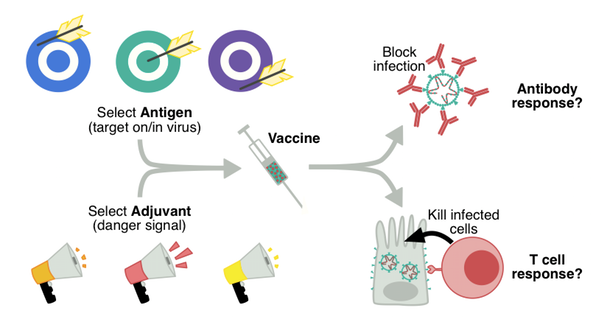 The basic components of a vaccine include the adjuvant and the antigen. Author provided

The ideal vaccine would be safe, easy to administer, simple and cheap to manufacture, and provide long-term protection against COVID-19. This protection would, hopefully, completely prevent infection with SARS-CoV-2.

To design an effective vaccine for SARS-CoV-2, we need to understand the virus.

Researchers working on SARS and MERS vaccines are now providing critical basic information on vaccines that may work for SARS-CoV-2.

Other researchers working on viral vaccines for dengue, Zika, hepatitis C, HIV and influenza are also pivoting to use their knowledge for SARS-CoV-2.

The SARS-CoV-2 virus uses ribonucleic acid (RNA) as its genetic material. This is usually associated with high mutation rates, which can be a problem for vaccines, as viruses can mutate their antigens to evade the immune response. Fortunately, SARS-CoV-2 seems to have a moderate rate of mutation to date, meaning it should be susceptible to a vaccine.

The SARS-CoV-2 viral particle is covered by “spike” proteins. This spike protein binds to a molecule on the surface of lung cells called the human angiotensin-converting enzyme 2 (ACE2).

There’s a lot of spike protein on the outside of the virus, making it a prime target for our immune response. So most researchers have focused on the spike protein as an antigen for SARS-CoV-2. 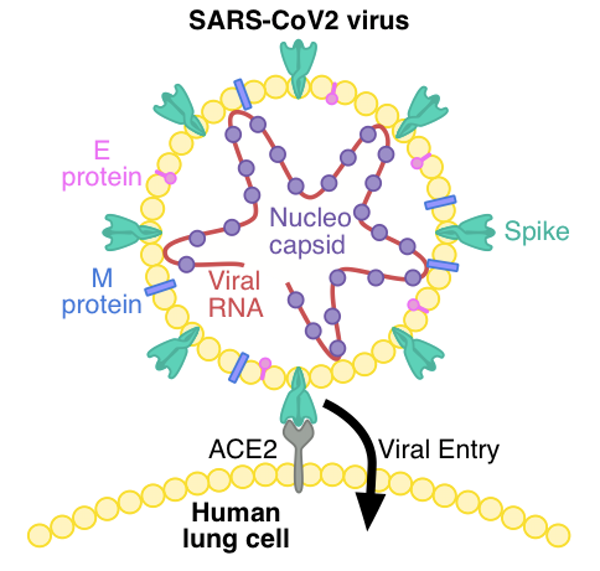 The spike protein may be a good target for a potential vaccine. Author provided

Importantly, for SARS-CoV-2 vaccines, we don’t yet know what type of immune response is needed.

We know patients who recover from COVID-19 can produce antibodies, but we don’t know what kind of antibodies.

We know COVID-19 patients who develop severe disease have low numbers of T cells, but we don’t have clear evidence of whether T cells can protect against COVID-19.

We know some experimental vaccine designs for MERS and SARS can make disease symptoms worse in animals, but we don’t know whether this would happen with SARS-CoV-2.

Since there are still a lot of unknowns, we have to cover all bases. Fortunately, dozens of vaccine designs are now advancing towards clinical testing.

Vaccines in the pipeline

Vaccine development during a pandemic happens at a global scale and is underway in several countries, including Australia.

The first vaccine to make it into clinical trials in mid-March is a lipid-encapsulated mRNA vaccine. For this vaccine, a short piece of the genetic material from the virus (mRNA) is coated with an oily layer (lipid).

The lipid helps the mRNA get inside a person’s muscle cells, and the mRNA provides a blueprint to make the spike protein the antigen (target). The mRNA itself acts as an adjuvant (danger signal).

This vaccine is now being given to volunteers in a phase I clinical trial in Seattle.

The main advantage of this vaccine is that it can be manufactured very quickly. The DNA sequence of SARS-CoV-2 used to design this vaccine was first published in January and the vaccine was ready for trials in mid-March, which is an incredibly tight turnaround for a vaccine.

But this type of vaccine has not been widely used in humans and we don’t know if it will induce robust immune responses. While modest immunity would be better than no immunity, we may need additional, more potent vaccines in the longer term.

A team at the University of Queensland is using a “molecular clamp”, which is a short piece of protein that holds a larger protein in the correct shape. They are working together with CSIRO, which is now producing large quantities of this clamped antigen and is beginning testing of this and other vaccines.

There are also newer approaches, such as “viral vector” vaccines. Scientists make a viral vector by taking genetic material from SARS-CoV-2 and inserting it into a harmless virus. When this is given to a person, the docile viral vector can’t cause any disease but it looks like a vicious virus to the immune system, and so it can generate robust immune responses.

These vaccines were rolled out rapidly for the Ebola epidemic in West Africa in 2014 and in Congo in 2018/19 with promising results.

They’re on their way for SARS-CoV-2, with CSIRO beginning to test a viral vector called ChAdOx1.

Finally, researchers are trialling a vaccine called “BCG”. This vaccine was developed 112 years ago for tuberculosis, but it seems to also provide general health benefits. Infants vaccinated with BCG had better overall survival and fewer viral respiratory infections in conditions with higher mortality and more circulating infections.

We don’t know how a tuberculosis vaccine can protect against unrelated viruses but researchers at a number of institutions, including the Murdoch Children’s Research Institute, are preparing to trial the BCG vaccine in health-care workers to see if it reduces COVID-19 infections or disease severity.

Moving at an unprecedented speed

Vaccine development is usually a long process involving both pre-clinical and clinical testing. For example, it took more than 15 years for Professor Ian Frazer and his team to develop and license the human papillomavirus (HPV) vaccine.

We’re moving through the vaccine pipeline quickly to develop a vaccine for COVID-19. Author provided

In stark contrast, experts have estimated a vaccine for SARS-Cov-2 may take 12-18 months. A huge international infrastructure is mobilising to develop a vaccine at an unprecedented speed.

However, safety will always be paramount with vaccines, so researchers are accelerating but not skipping clinical trials. Now we eagerly await the initial results.

First published on The Conversation