A vaccine historically used to prevent tuberculosis is now among the contenders for a COVID-19 vaccine. So what is the BCG vaccine and how might it work against coronavirus? Experts in Immunology at RMIT discuss.

This week, the Bill and Melinda Gates Foundation announced it will donate A$10 million to help fund an Australian trial testing whether a very old vaccine, BCG, can be used against a new threat, COVID-19.

So what is the BCG vaccine and what might its place be in the fight against coronavirus?

The ABCs of BCG

The BCG vaccine has been used for nearly a century to protect against tuberculosis, a bacterial disease that affects the lungs. Tuberculosis is caused by a bacterium called Mycobacterium tuberculosis.

BCG is short for Bacillus Calmette-Guérin, as it was created by Léon Charles Albert Calmette and Jean-Marie Camille Guérin in the early 1900s.

To make the vaccine, they used Mycobacterium bovis, a bacterium found in cows and closely related to Mycobacterium tuberculosis. They grew it on a nutrient-rich jelly in the lab for nearly 13 years. The bacterium adapted to this comfortable lifestyle by losing elements in its DNA it no longer needed, including elements that cause disease.

This process is called attenuation and it results in a live but weakened microbe that can be given to humans as a vaccine.

BCG is offered to infants in some parts of the world where there are still high rates of tuberculosis. It protects 86% of the time against some rarer forms of tuberculosis more common in children.

But it only protects about 50% of the time in adults.

Scientists and clinicians generally feel we need a better vaccine for tuberculosis. However, epidemiologists have noticed children who received BCG had significantly better overall health, with fewer respiratory infections and fewer deaths.

Immunologists suspect this is caused by a type of immune response called “trained immunity”.

Trained immunity is distinct from how we traditionally think of immunity, or “immune memory”, because it engages different types of immune cells.

There are two main types of cells within our immune system: innate cells, which respond rapidly to microbes that cause disease, and adaptive cells, which initially respond quite slowly.

Adaptive cells include B cells, which make antibodies to block infection, and T cells, which can kill infected cells. Importantly, adaptive cells can remember particular microbes for years, or even decades, after we first encounter them.

This phenomenon is called “immune memory”.

When adaptive immune cells encounter the same microbe a second or subsequent time, they respond much more quickly, and the immune system can effectively clear an infection before it causes disease. Immune memory is why often we don’t get infected with a specific microbe, like chickenpox, more than once.

Most of our current vaccines exploit immune memory to protect us from infection.

For decades, scientists believed innate cells lacked the ability to remember previous encounters with microbes. However, we’ve recently learnt some innate cells, such as monocytes, can be “trained” during an encounter with a microbe. Training can program innate cells to activate more quickly when they next encounter a microbe – any microbe.

Some live attenuated vaccines, such as BCG, can trigger trained immunity, which can enhance early control of other infections. This raises the tantalising possibility that BCG could train innate cells to improve early control of the SARS-CoV-2 virus, to reduce COVID-19 disease or even prevent infection.

And as a bonus, BCG could potentially protect us against other pathogens too. 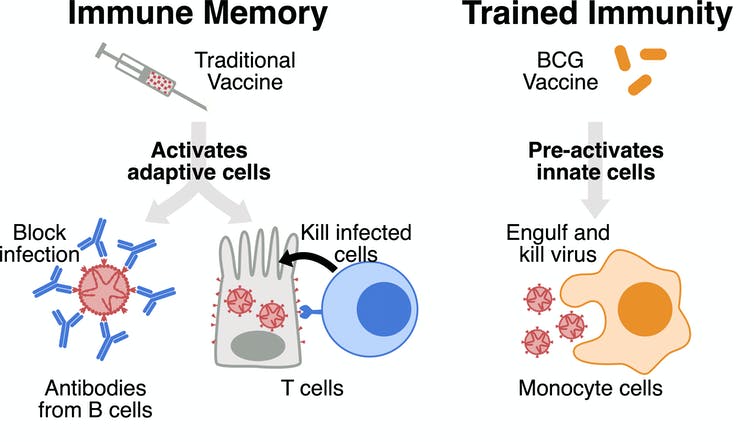 Could BCG protect against COVID-19?

We don’t know yet whether BCG will reduce the severity of COVID-19, but the vaccine has some interesting features.

First, BCG is a potent stimulator of the immune system. Currently, it’s used alongside other therapies to treat bladder cancer and melanoma, because it can stimulate immune cells to attack the tumour.

BCG also seems to benefit lung immunity. As we mentioned, children who have had the vaccine appear to get fewer respiratory infections.

There’s a study underway in Melbourne looking at whether BCG can reduce symptoms of asthma in children.

And finally, BCG has been shown to limit viral infection. In one study, human volunteers were given BCG or a placebo one month before being infected with a virus. Volunteers who received BCG had a modest reduction in the amount of virus produced during infection compared to those who received the placebo.

However, BCG can cause side-effects to be mindful of. It usually causes a small raised blister on the skin at the vaccine site and it can cause painful swelling in the surrounding lymph nodes.

Importantly, because it’s a live bacterium, it can spread from the vaccine site and cause disease, called disseminated BCG, in people who are immunodeficient, like people with HIV. This means BCG can’t be given to everyone.

The ultimate test of BCG as a preventative measure for COVID-19 is to run randomised clinical trials, which are now underway.

Researchers across Australia and the Netherlands are preparing to give BCG to the people who have arguably the highest risk of COVID-19: frontline health-care workers.

These phase III trials will collect data on whether workers vaccinated with BCG have fewer or less severe COVID-19 infections.

If BCG is shown to be effective, we’ll face other challenges. For example, supply of the vaccine is currently limited. Further, there are many different strains of BCG and they might not all provide the same protection against COVID-19.

Protection would likely start to wane relatively quickly. When trained immunity was tracked in humans after BCG, it started waning from three to 12 months after vaccination.

Protection would also not be as strong as what we see with many traditional vaccines, such as the MMR vaccine which protects against measles 94.1% of the time.

So BCG would be most helpful for people at high risk of exposure, but it wouldn’t replace a traditional vaccine based on immune memory.

These studies are important to give us options. We need a complete toolkit for control of COVID-19, consisting of anti-viral and anti-inflammatory drugs and vaccines. But an effective COVID-19 vaccine is likely still many months, even years, away.

By repurposing an old, well-characterised vaccine, we could bridge this gap and provide some protection to our health-care workers as they confront COVID-19.

Dr Magdalena Plebanski is Professor of Immunology at RMIT University. She is also the Director of the Biomedical and Health Innovation Enabling Capability Platform (BHI-ECP) and Head of the Translational Immunology and Nanotechnology Laboratory.

Navigating love and intimacy in a ‘love lockdown’

From hospitals to households, we can all be better at remembering to wash our hands

If there’s one place where you would expect hand cleanliness to be beyond reproach, it’s hospitals. But this isn’t necessarily the case, writes Dr Debbi Long.