Putting our money on two COVID vaccines is better than one: why Australia’s latest vaccine deal makes sense

Putting our money on two COVID vaccines is better than one: why Australia’s latest vaccine deal makes sense

The Australian Government is working with two major pharmaceutical companies to facilitate the local production and supply of two different COVID-19 vaccines – if they're proven to be effective.

A series of deals worth A$1.7 billion between the federal government and two major pharmaceutical companies would see the local production and supply of two vaccines, developed by the University of Oxford and the University of Queensland, respectively.

So what’s in the deals, what are the vaccines, and are we picking the best of the bunch for a fair price?

The current and previous deals represent progress in negotiations between the Australian government, UK/Sweden-based pharmaceutical company AstraZeneca, and Melbourne-based biotechnology company CSL. The ultimate aim is a formal agreement to manufacture the two vaccines in Australia.

Previously, the government signed a letter of intent with AstraZeneca, which is working with University of Oxford researchers to test their AZD1222 vaccine.

But AstraZeneca needed a manufacturer in Australia to make the vaccine locally. The biggest local vaccine manufacturer is CSL, which is also working with the University of Queensland to test its V451 vaccine.

The latest developments include two “heads of agreement” — non-binding documents that outline the basic terms of a tentative deal:

The government and CSL also entered a funding deed worth up to A$1.7 billion, under which CSL will prepare to manufacture AZD1222 and one other COVID-19 vaccine (likely V451).

Meanwhile, the government and AstraZeneca have a separate agreement to supply 3.8 million doses produced overseas in early 2021 for vulnerable people and health-care workers.

The final formal agreement remains contingent on whether the vaccines protect against COVID-19 in clinical trials currently underway.

A recap of the vaccines

Oxford and AstraZeneca have what’s called a viral vector vaccine. Researchers take a fairly harmless virus (in this case an adenovirus from chimpanzees) and modify it to produce a target (here they’ve used the spike protein of SARS-CoV-2, the coronavirus that causes COVID-19).

A viral vector looks like a virus to our immune system, so the idea is it can train our body to mount a strong response against SARS-CoV-2. But the viral vector can’t cause disease.

The spike protein, on the surface of the SARS-CoV-2 virus, has been important in developing a vaccine. Shutterstock

The University of Queensland and CSL have a protein subunit vaccine, which also uses the spike protein as a target. Unfortunately, spike protein is notorious for changing its shape, which makes it harder for our immune system to recognise.

So the University of Queensland has developed a molecular clamp to hold the spike protein in the correct shape. The clamped spike is then mixed with an adjuvant, a compound that stimulates an immune response. The adjuvant here is MF59, used in some influenza vaccines for older people.

Until a vaccine is shown to work in a phase 3 clinical trial, it’s educated guesswork as to which will be effective.

Selecting two very different types of vaccines is a good strategy though. Each has different pros and cons, and we’ll have a better chance of ending up with an effective vaccine, than, say, if we were banking on two similar candidates.

The Oxford/AstraZeneca vaccine can be made quickly and should generate immunity after a single shot. Only one viral vector vaccine has been approved before, for Ebola, so it’s more experimental. But it’s already well advanced through clinical trials.

The Queensland/CSL vaccine takes longer to make as manufacturing large amounts of protein can be difficult, and it will require two shots. But protein subunit vaccines are more of a known entity, routinely used to prevent influenza and hepatitis B.

Why so many doses?

Some 84.8 million doses may seem like a lot to vaccinate 25 million Australians. But it’s reasonable for two reasons.

First, each person might need two doses of vaccine to generate optimal immunity. For the Queensland/CSL vaccine, the pledged 51 million doses will allow for that and more.

A total of 33.8 million doses of the Oxford/AstraZeneca vaccine would allow for each person to get one, as intended for this type of vaccine, with plenty to spare. But we should note early clinical trial data has suggested two doses are better than one. 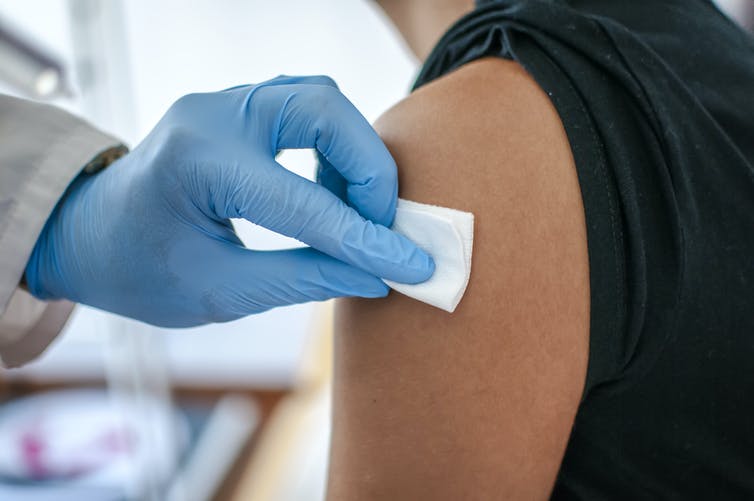 We’ll need more doses of a COVID-19 vaccine than there are people in Australia. Shutterstock

Second, it’s logistically challenging to get a vaccine from the manufacturer into a person’s arm. Not every dose will get to where it needs to go safely and on time. So we’ll need a few million extra doses, just in case.

Is the price reasonable?

There’s a large range in pricing of potential COVID-19 vaccines. Some bulk deals are as low as roughly A$5.50 per dose (AstraZeneca) and other vaccines could be as high as around A$100 per dose (Sinopharm).

Several factors contribute to this variation, including differing manufacturing costs and profit margins.

The current deals with CSL average A$21 per dose, which is mid-range and reasonable considering the resources CSL will need to put towards reconfiguring their operations.

All eyes will be on the phase 3 trial results for AZD1222, expected in October. If these are good, the government, AstraZeneca and CSL would need to finalise a formal agreement and production could proceed.

Even if AZD1222 is successful, the V451 clinical trials remain essential. V451 could potentially be more effective or better suited to specific groups, especially older people. It could also potentially be used to boost responses after AZD1222 vaccination. It’s a crucial card to have up our sleeve.

Dr Kylie Quinn is a Vice-Chancellor's Research Fellow with the School of Health and Biomedical Sciences, RMIT University. She leads the new Ageing and Immunotherapies Group.

Distributing a vaccine is a bit like boarding a plane — we can’t all board at the same time. So who gets priority? There are a few reasons we should consider vaccinating older people first.

Discover 76 years of history through the eyes of students

RMIT’s flagship student-led publication, Catalyst, has been a source of campus news since 1944. Now most issues are available to read online.

Explainer: why is Victoria fast-tracking reforms to sexual violence ‘gag laws’ and to what effect?

The Victorian parliament is considering a bill to change laws that prevent sexual violence victim-survivors from speaking about their experience. But some of the details need to be reconsidered.