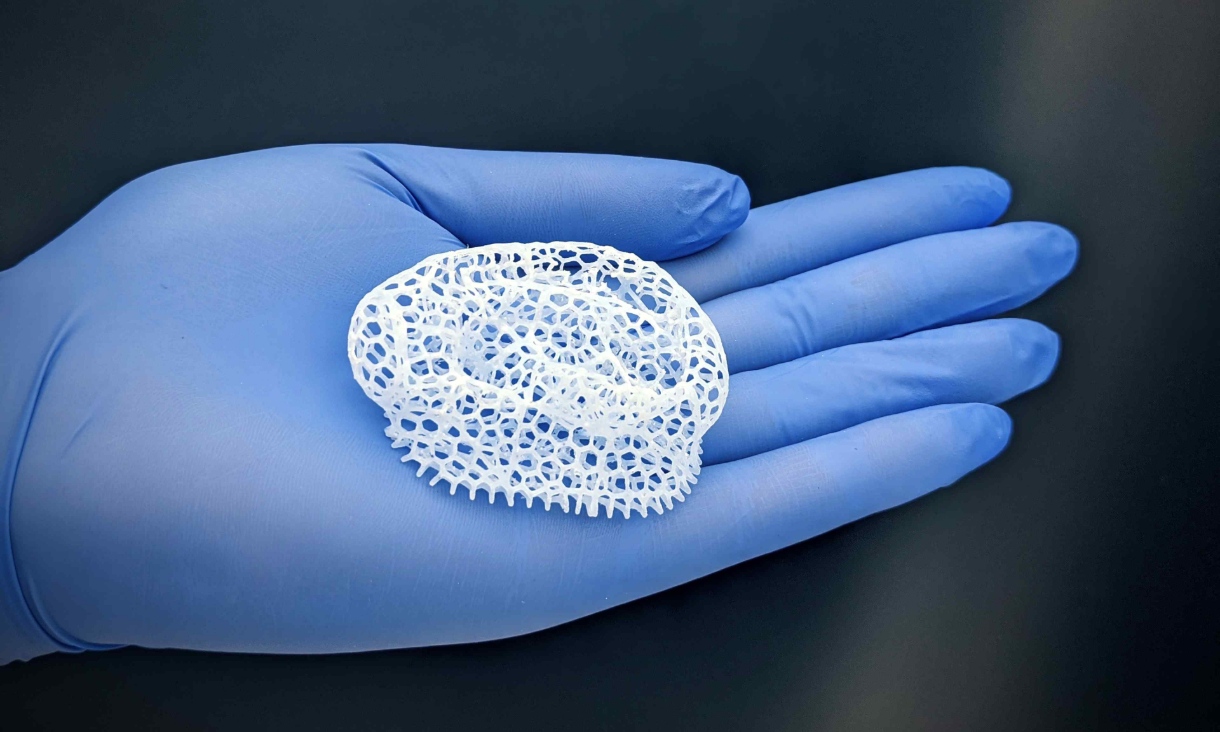 From biosynthetic brains for predicting epilepsy to tiny 3D printed implants for regrowing muscle and bones, this is research at the very edge of what is medically possible.

But it’s the team behind these ideas ­– engineers, robotics experts and biologists working with top surgeons and clinicians – that makes the difference between dreaming and delivering.

Professor Rob Kapsa is a lead RMIT researcher at the Aikenhead Centre for Medical Discovery, where he heads a research group using ACMD’s purpose-built biofabrication lab.

Based at St Vincent’s Hospital Melbourne, ACMD brings researchers and clinicians together to find solutions for some of our biggest biomedical challenges.

In recognition of the centre's vital role, the Victorian Government this week gave the green light for a $206 million purpose-built facility to support its continued growth.

We talked to Kapsa about ACMD's intriguing work, the philosophy that drives his team collaborations and the fascinating future of biofabrication.

First things first, what is biofabrication and how could it transform medical treatment?

This is fundamentally about making things that fully integrate into our bodies, to heal, repair and restore function.

Unlike traditional implants, biofabricated structures and devices can actually come close to mimicking the phenomenal complexity of living human tissue.

It opens huge opportunities for making structures to restore, replace and regenerate anything from bones and muscles to brain, joints and connective tissues.

For example, researchers are working on new biofabricated technologies to repair deteriorating bone in older people, develop a customised, self-regulating artificial pancreas for people with diabetes and build replacement muscle for trauma patients. 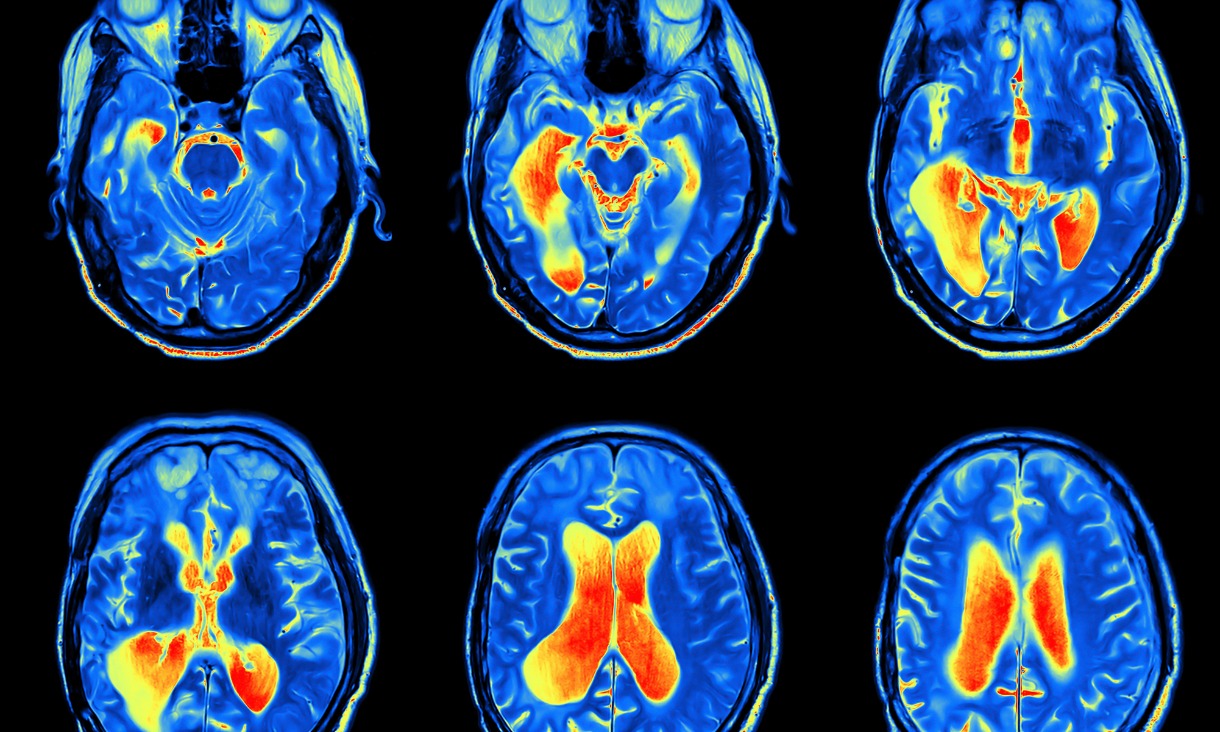 Biofabrication focuses on making structures to restore, replace and regenerate anything from bones and muscles to brain.

Tell us about the biosynthetic “brains” you’re making.

When you’re trying to understand how the brain works, and how to fix it when it goes wrong, looking at cells on two-dimensional slides only takes you so far. So we build in three dimensions, using 3D bioprinting.

The ‘brains’ we make are tiny, around 3mm by 3mm, but there is enough functioning brain there to be studied and analysed (and besides, the human brain cortex is only 3mm thick).

Our little brain blocks are made from skin cells, which we reprogram into stem cells that can make neurons. The block of ‘brain’ is suspended in a 3D collagen matrix and put on array of electrodes.

Using electrical stimulation or adding neurochemicals, we can get the neurons to fire. The electrode array records that activity – which mimics the firing of the nervous system – to give us an in-depth picture of what is happening.

How are these “brains” helping us with research into epilepsy?

Epilepsy affects 1 in 100 people, but we know that about half of those develop the condition later in life, after experiencing some injury to the brain when they were younger.

We think that may be because some people have a genetic predisposition, but right now we can’t predict who may be at risk of developing epilepsy because of head injury.

In this research, we’re collaborating with the neurologists at the Murdoch Children’s Research Institute who discovered a genetic mutation that causes epilepsy, as well as neurologists at St Vincent’s Hospital Melbourne.

We take skin cells from people who have that genetic mutation, remove the mutation and grow biosynthetic ‘brain’ from those genetically-edited cells. For comparison, we also make brain out of their ‘epilepsy-positive’, unedited cells.

We then test the ‘brains’ we make from these cells by inducing a certain level of injury and seeing if – and when – they display epileptic-like activity.

What we’re ultimately aiming for is a simple genetic test that could determine if you are likely to develop epilepsy from minor head trauma, such as through playing AFL football or other sports. 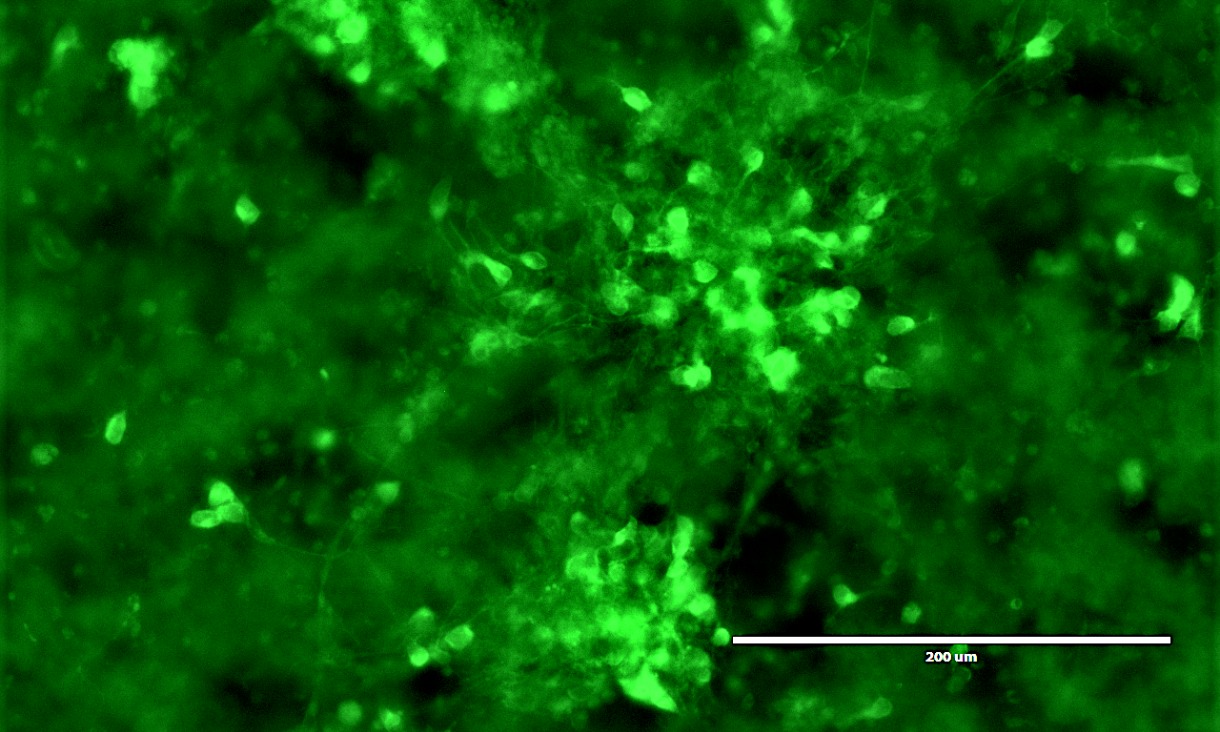 How else could these “brains” be used in future?

Our biosynthetic ‘brains’ will also be used for the personalised modelling of neurological disorders.

This is where a ‘brain’ grown from a patient’s own cells could enable a clinician to better understand their condition, optimise treatment and ultimately, even their prognosis.

For RMIT, this work opens exciting new avenues for the design, development, fabrication and translation of bio-mechatronic hybrid devices and systems.

As part of research to develop treatments for muscular dystrophy, your team has pioneered a “trojan horse” technique that combines muscle engineering and gene editing. How does it work?

The basic idea is taking cells from people with the mutation that causes muscular dystrophy, editing the mutation out and then putting those cells back into the muscle to make it work again.

There have been clinical trials of regenerative cell therapies, notably myoblast transplantation therapy, but sadly these have failed as the implanted cells do not thrive and multiply.

The difference with our approach is rather than implanting the cells directly, we protect them in a special jelly made from seaweed. That’s the ‘trojan horse’ ­– a piece of seaweed jelly with muscle cells in it that is readily accepted by the body and then allows the healthy cells to ‘invade’ the ailing muscle.

Our technique results in an incredible spread of viable muscle cells, with pre-clinical studies in mice showing multiple millions of nuclei arising from the 10,000 cells we initially implant. 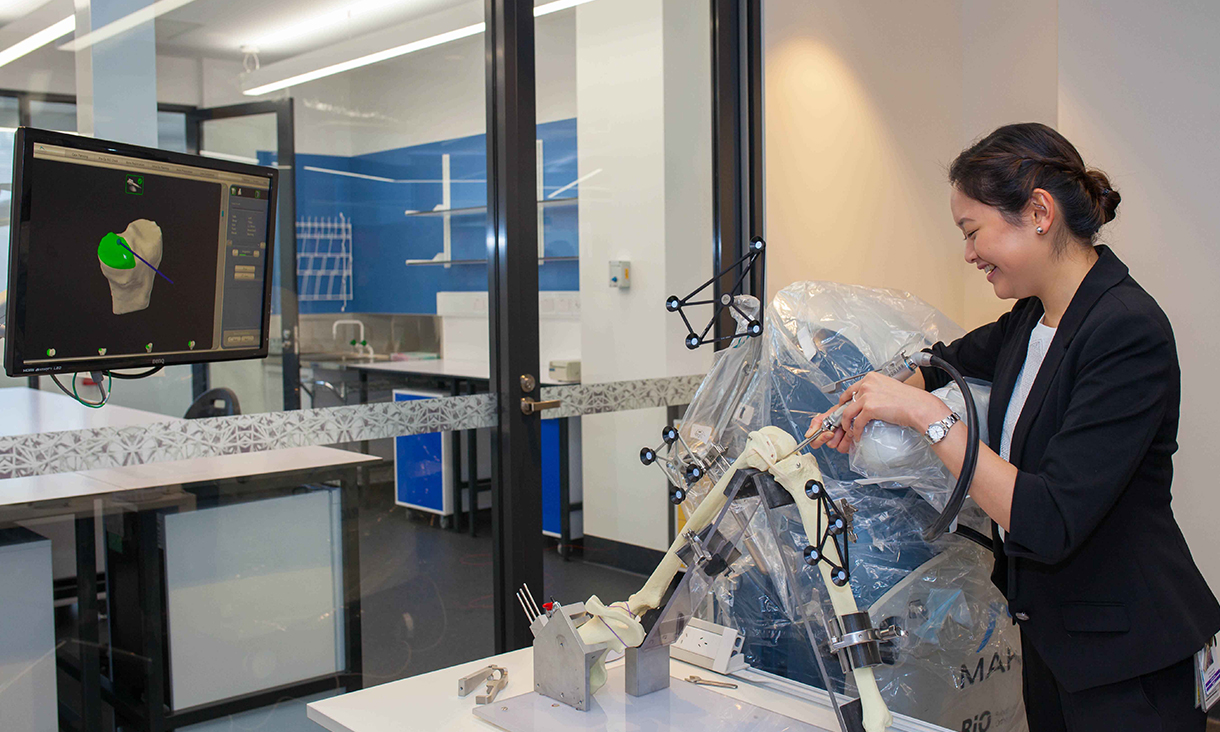 State-of-the-art technologies at the ACMD are helping power the research.

What role does 3D printing and bioprinting play in your team’s work?

At ACMD we’re lucky to have access to state-of-the-art biofabrication and advanced manufacturing technologies, including specialist bio-printers designed for 3D printing living cells and bio-reactors for 3D cell cultures. Working with these technologies makes a massive difference to our collaborations.

For example, we use a 3D printing process called ‘melt electrowriting’ in our work to encourage vascular networks to grow in engineered tissues. This system can also be used in our tissue modelling structures, so they more closely resemble vascularised tissue.

But sometimes our work is not about the latest tech – it’s about coming up with new takes on the old.

We also recently published a recipe for making muscles, that details the ingredients, equipment and techniques you need to engineer functional skeletal muscle tissue.

It’s a summary of our work over many years in finessing our bioink and bioprinting methods for producing viable 3D printed skeletal muscle constructs. We hope this work will eventually allow the engineering of muscle for people who have undergone muscle disease and trauma.

You have long-standing collaborations with clinicians and surgeons at St Vincent’s Hospital Melbourne. How has the establishment of ACMD accelerated your team’s research?

Over the decades, as our team has developed our approach for muscle and nerve engineering, we’ve always worked closely with clinicians and surgeons to develop real-world solutions to old-world health issues that are underserved by existing technologies.

Our work is not just about interesting ideas or theoretical possibilities – it’s about solving the problems that clinicians and perhaps more importantly, patients, grapple with daily.

We’re working directly with the people who will one day use our research in their clinical practice and in surgical theatres. They’re sharing their challenges and what they need to help their patients.

And that is ultimately what we want our research to do – to get out and help people.

Biosynthetic brains, engineered muscle, trojan horses… some of these ideas almost sound like science fiction. So when could they actually become clinical reality?

It’s true that what we are doing is on the frontiers of science. But advanced manufacturing technologies are already making a difference in patient’s lives, such as Australia’s first locally-made 3D printed spinal implant.

The RMIT work on that initiative led to new directions in the design of next-generation implants for bone cancer patients, a project focus within the ACMD.

Some of our more clinically advanced projects could be 5-10 years away from clinical translation, but we are still in the early days of the 3D bioprinting revolution.

The great thing is that our collaborative clinico-scientific approach means we can skip past impractical ideas that could never work in real life and focus in on research that has the most potential for impact. 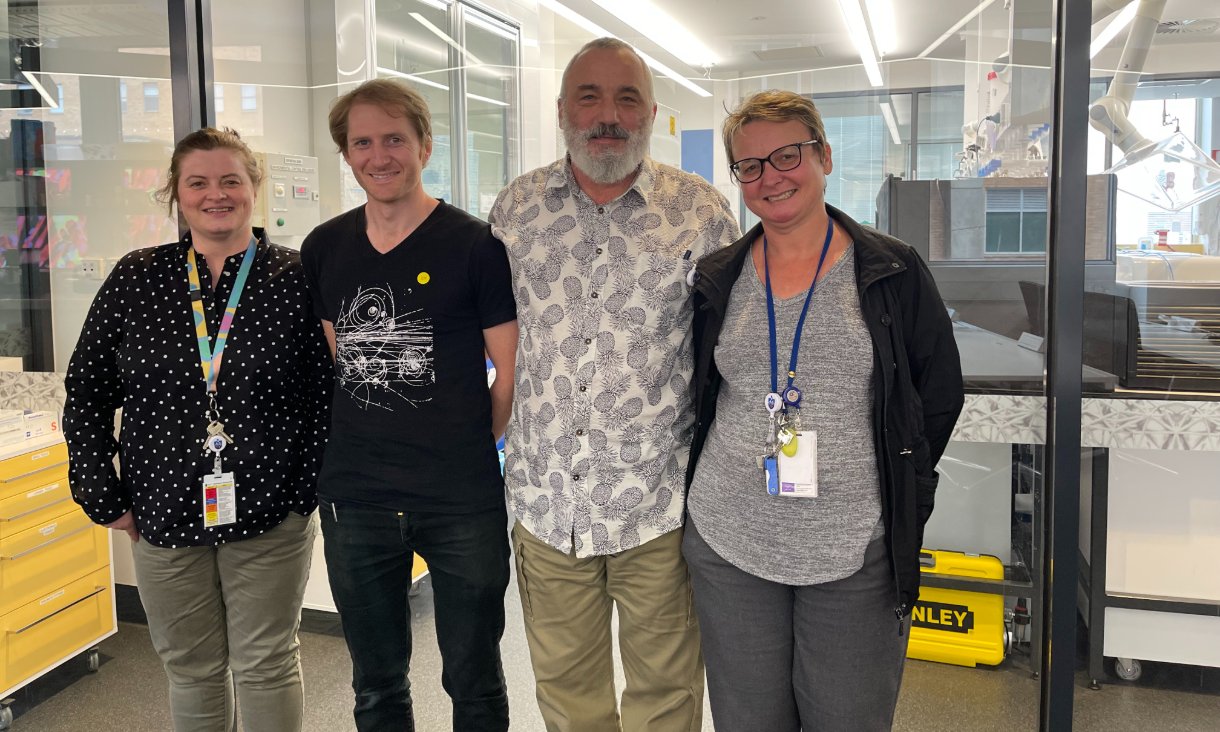 The BiTE Network, which aims to bring together academics and PhD candidates working in the broader bio-engineering field towards new BiTE orientated areas, is supported by RMIT’s Enabling Capability Platforms for Advanced Materials, Manufacturing and Fabrication, and Biomedical Health and Innovation.