Australia is currently negotiating a free trade agreement (FTA) with the European Union, and while the discussion of geographical indicators (GIs) is taking up much of the headlines, the agreement may have more far reaching benefits and ramifications. 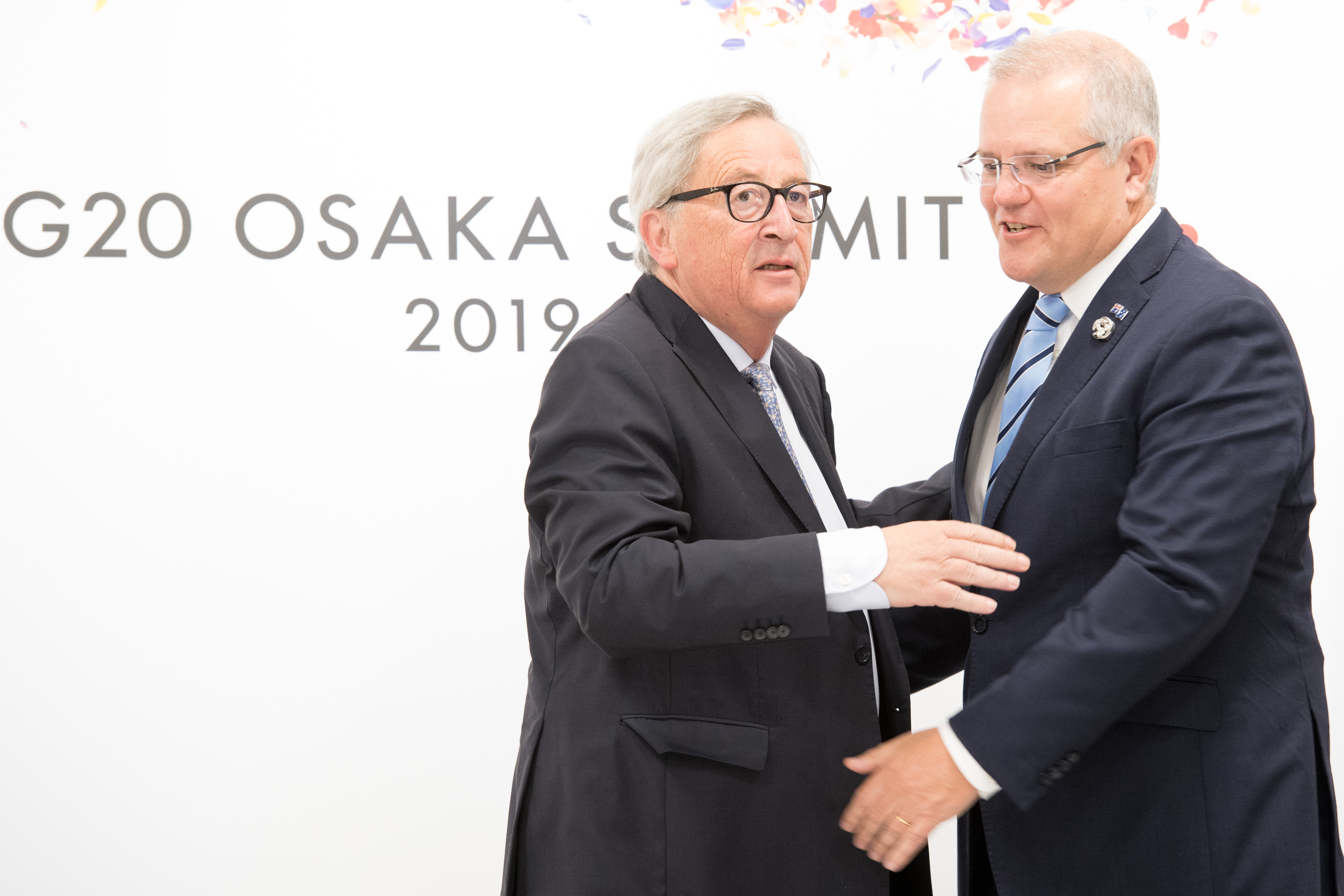 Australia is currently negotiating a free trade agreement (FTA) with the European Union, and while the discussion of geographical indicators (GIs) is taking up much of the headlines, the agreement may have more far reaching benefits and ramifications. One important point of contention in this regard is the EU’s desire for Australia to improve its low petrol quality so that it can sell more of its low emissions cars to Australia. This could incite a sluggish Australian Government to act more effectively on climate change and meet its Paris Agreement emissions targets in the future.

For Australia, an FTA with the EU is extremely significant. Australia has a long historical relationship with the EU, and today regards the continuation of that partnership in the future as important. The EU and Australia have had a somewhat difficult history, with long disputes over agriculture and foreign policy previously souring any chance of a productive relationship. While the EU and Australia struggled to move past agricultural disputes in the 1970s, the relationship began to stabilise in the 1980s and 90s. Since the mid-2000s, the two parties have recognised that that they share a number of important perspectives on the multilateral trading order. This paved the way for more productive multilateral discussions in the 2000s. From purely economic and trade beginnings, the EU has become an important political, foreign policy and security ally to Australia.

Under the Gillard Government, the EU and Australia began negotiations on a treaty-level Framework Agreement in 2011, which then Foreign Minister Kevin Rudd described as opening “a new phase of closer cooperation between Australia and the EU that better accommodates our broad interests and priorities”. The EU’s High Representative for Foreign Affairs and Security Policy noted that the agreement enhanced collaboration in areas such as foreign affairs and security, climate change, research, science and education. More recently, Australia’s involvement with European companies for its defence equipment, a desire to diversify its economy, the Australian Defence Force’s affiliation with NATO, and US President Donald Trump’s retreat from multilateralism and engagement with the region has made the EU an important partner in Australia’s future.

An FTA is the next logical step in deepening and strengthening the current partnership. The EU receives 4.7% of Australia’s exports, while supplying 18.1% of Australia’s imports. Where once the EU and Australia had a fragmented relationship, the direction of global trade and need for new relationships is forcing governments to be dynamic and seek new solutions. While FTAs provide new business opportunities for small and large industries, they also allow for greater political and social negotiations to occur. Economic collaboration can provide the basis for greater political activity in promoting peace, geopolitical stability and, security.

In terms of the specific shape of a future agreement, Australia’s poor fuel quality is a point of contention within the negotiations. Currently many clean European cars, already hit with a 5% industrial tariff by Australia, are unable to be sold here due to the stark contrast in fuel quality. Australia’s most popular fuel, 91 unleaded, allows sulphur levels of up to 150 parts per million compared to the 10ppm allowed by the European Union. Australia ranks 66th in the world for its fuel quality, the lowest of all developed countries, and up to 15 times higher than China. This is damning considering there are currently 17 million registered cars on the road in Australia, causing the second biggest source of greenhouse gas pollution, behind only electricity. This equates to almost one fifth (19%) of emissions in Australia.

Under the Paris Agreement (entered into force on November 4, 2016), the Australian Government agreed to reduce emissions by 26-28% from 2005 levels by 2030. However, since 2015, our emissions have increased. One important reason for this is Australia’s driving culture, one that encourages long drives and big, fuel inefficient cars. Australia is one of few countries in the developed world that does not have a fuel efficiency standard, meaning the cars driven in Australia are on average less fuel efficient than those in Europe and the US.

To tackle climate change, Australia needs to rapidly invest in and improve public transport, cycling and walking alternatives, electric bicycles, cars, trucks and trains and also improve fuel quality. Currently, electric cars only make up around 0.2 per cent of new car sales. A combination of electric cars and low emissions fuel would help to curb the 16 per cent increase in emissions from transport in the past 10 years.

Higher fuel standards do not just benefit the environment and support Australia’s commitments to the Paris Agreement. Better quality petrol also ensures engine operability, maximises vehicle performance and, increases vehicle efficiency to the pump. Policy experience in the United States and New Zealand suggests that reducing the sulphur content of fuels could be achieved within three years. Tony Weber, CEO of the Federal Chamber of Automotive Industries (FCAI) told a Senate committee that improving fuel quality could offer a 3-5% improvement on CO2 emissions “overnight”. However, Australia’s relatively low petrol prices in comparison to other OECD countries are a difficult hurdle to jump.

Even with the performance benefits of higher fuel quality, there is still conjecture in Australia about our ability and willingness to meet the Paris Agreement goals, or even the impact of humans on climate change. In 2018, UN Environment’s Emissions Gap Report noted that Australia, along with a host of G20 countries, was not on track to reach its Paris Agreement emissions targets. Australia’s then Environment Minister Melissa Price and Prime Minister Scott Morrison nevertheless expressed certainty that Australia would meet its targets, despite the UN’s Intergovernmental Panel on Climate Change report stating the opposite. Additionally, Australia’s Minister responsible for drought and natural disasters, David Littleproud said recently that “I don’t know if climate change is manmade”. Although Littleproud later revised these comments, saying he did accept the science on manmade climate change, and always had, the fact that he made them at all is an indication of the level of debate in Australia.

It seems unlikely that the Australian government will act directly on climate change and implement policies that lower our emissions in a meaningful way. Negotiations over an FTA with the EU, however, might push the government to do so indirectly. Petrol quality is just one way that Australia can reduce emissions, and if the EU continues to push for reform through the FTA negotiations, perhaps it will be possible for real action on climate change through EU soft power.

Elijah, A., and O’Neil, A. (2018). “Australia and EU Trade: Potential and Pitfalls in a Changing Global Context.” In B. Mascitelli and B. Wilson (eds), ‘So Distant, So Close’: Australia and the European Union in the 21st Century. Melbourne: Australian Scholarly Publishing.

Kurnelovs, R. (February 5, 2019). 'Among the worst in OECD': Australia's addiction to cheap, dirty petrol. The Guardian.

Martin, S. (August 13, 2019). Branding cheese as feta and gruyere may be banned in Australia under EU deal. The Guardian.

Martin, S. (September 2, 2019). EU to push Australia to clean up petrol standards as part of free trade deal, The Guardian.

Remekis, A. (September 12, 2019). Scott Morrison says Gladys Liu is 'a great Australian' – as it happened. The Guardian.