Gender transition is a broad term that describes the process whereby a transgender or gender diverse person “socially and/or medically affirms their gender identity”.

Binary Australia makes the claim in a flyer and on its website, but it does not explain what the organisation means by “gender transition”, including whether it is referring to social transitioning, medical transitioning or both.

Without this crucial context, Binary Australia’s flyer and website is open to the interpretation that a child can undergo medical transition without parental consent.

Indeed, the lack of detail on the flyer and the use of a medical professional on its website detailing serious physical medical outcomes have led some social media users to surmise that the government could give permission to minors to undergo gender transition surgery.

One person comments, “It’s true. Schools can declare your children to be ‘mature minors’ for the purpose of social and medical transitioning”. Another says, “Have we learnt nothing from England. Tavistock [a UK clinic that prescribed so-called puberty blocker drugs] has been shut down.”

Under Victorian law, individuals under the age of 18 require permission from medical practitioners and both parents or carers to access medical treatments for gender dysphoria — a term for the distress experienced when a person's gender identity differs from their biological sex.

The page on Binary Australia’s website is titled “Dan Andrews can transition your child without your knowledge or consent.”

It paraphrases a Brisbane paediatrician, who argues that "putting children on a medicalised transitioning pathway can lead to devastating consequences. A lack of sexual function, sterility, stunted brain development and bone density issues.

“Anyone who thinks a politician, even the Premier, can make these kinds of decisions for children has gone too far. Daniel Andrews and the Victorian education department have chosen to bypass medical practitioners, court judges and parents in their quest to make queer, normal in Victoria.”

A flyer produced by the pressure group depicts a photo of an adult and a young child with the text, “Gender Transition Without Parental Consent? Daniel Andrews Labor Policy”. The flyer could be taken to mean that a child can undergo a medical transition without parental consent.

Images of the flyer have been reshared online, including by Greg Cheesman, a Liberal Democratic Party candidate running in the Victorian election, who said the “mature minors legislation” would mean children could begin gender transitioning without parental consent.

But this purported “mature minors legislation” does not exist. 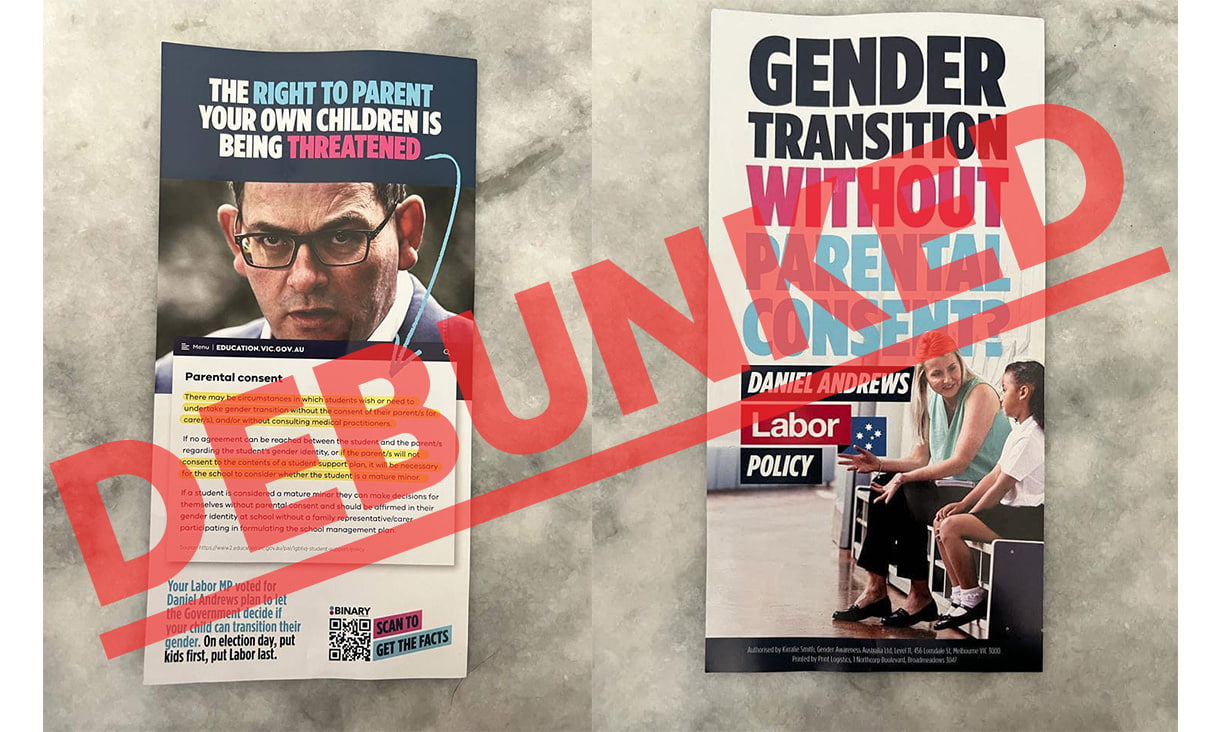 Both the flyer and the article on Binary Australia’s website cite information from a Victorian Government web page on LGBTIQ student support in schools to support its claim that Victorian education professionals can give permission for students to “gender transition” without parental consent.

“Who decides which circumstances warrant going behind a parent’s back and transitioning a child without their parents knowledge?” the article asks, calling the policy “extraordinary” and “dangerously insane”.

Critically, though, the information it cites was taken from a section on the government website, headed "Parental Consent", that refers to a student “affirming their gender identity” at school, not medical transition.

Under the state government’s education policy, schools must work with students who are affirming their gender identity to develop a student support plan in consultation with the student’s parents or carers where possible. 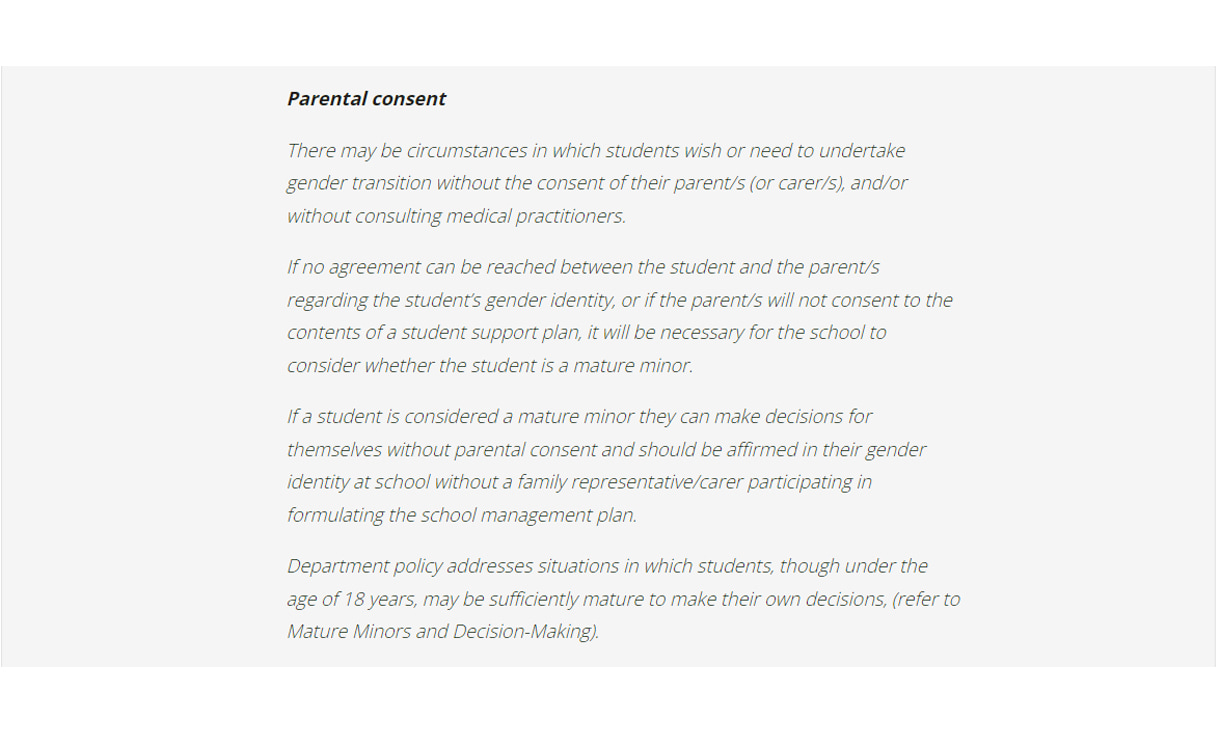 Gender transition or affirmation is an umbrella term to describe the process whereby “a transgender or gender diverse person socially and/or medically affirms their gender identity”.

Social transition refers to the process an individual takes to change their gender expression to better match their gender identity, such as through the use of their preferred name, pronouns and uniform.

Medical transition refers to the medical process by which a person changes their physical sex characteristics to more closely align with their gender identity.

Any individual under 18 years seeking to access gender dysphoria health services must also be deemed to be “Gillick competent”, meaning they are legally considered to have the degree of maturity and intelligence needed to consent to any medical treatments.

If a parent or legal guardian does not consent to gender treatments, the decision is referred to the Family Court.

What does Victorian education policy say about medical transition?

The Victorian Department of Education cannot give permission for an individual under 18 years of age to access medical gender transition services such as puberty suppression, gender affirming hormones or surgical interventions. These must be accessed through a medical professional with consent from both parents or carers.

What does Victorian education policy say about social transition?

The Victorian Department of Education allows schools to support gender diverse students under 18 to socially transition, without parental consent.

Department policy is for the school to establish a “gender affirmation student support plan”. This means allowing a student to present as their affirmed gender identity through the use of their preferred name, pronouns and uniform.

The plan should be developed in consultation with the student and their parents or carers, where possible, the policy states. “If no agreement can be reached between the student and the parent/s regarding the student’s gender identity, or if the parent/s will not consent to the contents of a student support plan, it will be necessary for the school to consider whether the student is a mature minor… If a student is considered a mature minor they can make decisions for themselves without parental consent.”

A spokesperson from the Department of Education and Training told RMIT FactLab: “Our schools support trans and gender-diverse students to embrace their identity by supporting [them] to express their gender with their uniform and pronouns, and [by] training staff to create supportive spaces for all students.

“Schools support mature minors under the age of 18 to make decisions on their own behalf when it comes to their own identity. This does not include medical transition, which can only be accessed through a medical professional,” the spokesperson said.

They also told FactLab, “Young transgender Victorians are 15 times more likely to attempt to take their life than other young people. When gender-diverse people are embraced and supported at school, they have better social, educational and health outcomes for life.”

Parents are usually involved in a student's social transition, working with the child and school to create a support plan. However, in circumstances where no agreement can be reached between the student and parents regarding the student’s gender identity, the government webpage says schools can decide whether that student is a mature minor. If considered to be, the student can affirm their gender identity under a gender affirmation student support plan without parental consent.

Social transition is not medical intervention

Jeremy Wiggins, CEO at the trans, non-binary and gender diverse advocacy organisation Transcend Australia told FactLab there is lot of “misleading and alarmist language” around gender diversity. He said “gender transition” is a generalised term which does not accurately capture the complexity of an individual’s journey or automatically mean that a person will undergo medical intervention.

“Binary Australia are conflating the language on the website and saying that gender transition means medical intervention, which is not the same thing,” Mr Wiggins said.

“The Victorian Education policy is not about medical intervention, it is about social transition, meaning using an individual's preferred name and pronouns to provide a safe and affirming education environment for a young person."