Facebook posts which claim that candidates standing in the 2022 federal election will receive $2.90 for each first preference vote lack context, giving the impression that all candidates can receive this funding regardless of how many votes they receive.

In reality, only candidates who receive more than 4 per cent of the total number of formal first preference votes, and provide evidence of their electoral expenditure, are eligible for funding from the Australian Electoral Commission (AEC).

The original Facebook post, shared more than 300 times, was created by “Turning Point Australia” and has been shared by candidates from political parties such as United Australia Party and the Liberal Democratic Party.

Turning Point is a group founded in the USA to promote conservative values in high schools and colleges. Its connection with this Australian Facebook page is unclear. 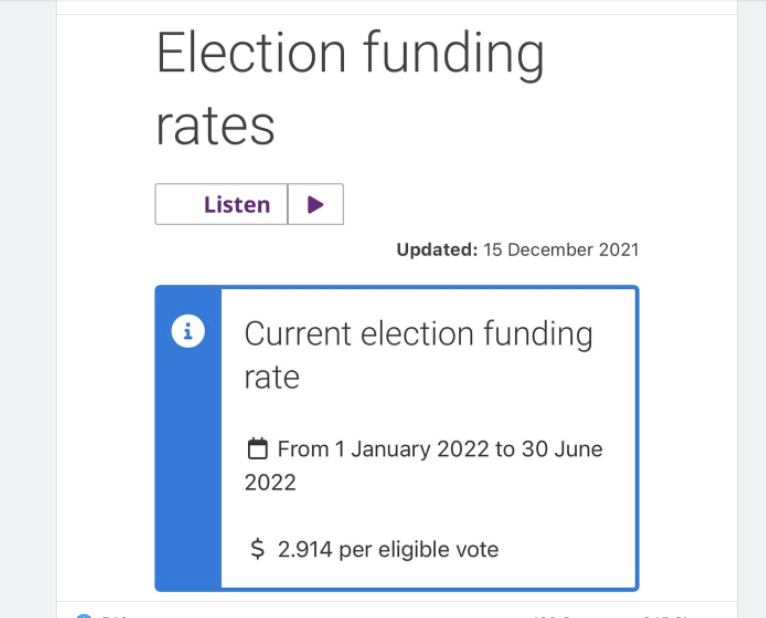 The author of the post adds: “Your first vote on a ballot is worth $2.90 for this federal election.💰 Stop paying these knuckleheads in government to rob you! You can defund them by putting anyone but the major parties first.”

Following this, the post lists so-called “Freedom Parties” that “are better suited with your vote and funding than those who locked you down for 2 years”. The list includes Pauline Hanson’s One Nation and the United Australia Party, amongst many smaller parties.

More information is required than is presented in this Facebook post to get a complete picture of how the AEC distributes election funding to candidates or parties.

Election funding is distributed to eligible candidates to refund their electoral expenditure, which is described by the AEC as “generally expenditure incurred for the dominant purpose of creating or communicating electoral matter”.

This may include “broadcasting, advertising and publishing expenses related to the election”.

The amount of funding available, and who is entitled to payment, is complex.

According to section 292G of the Commonwealth Electoral Act 1918 (Cth), “Election funding may be payable in relation to registered political parties, candidates and groups under this Division. The election funding is payable in relation to any candidate who received at least 4 per cent of the total formal first preference votes cast in the election.”

The 4 per cent threshold refers to the percentage of the first preference vote gained by a candidate in any House of Representatives division or Senate race.

For example, Labor, the Liberal National Party of Queensland, the Greens and Pauline Hanon’s One Nation all received more than 4 per cent of the first preference votes in the Queensland division of Dickson at the last federal election, and were therefore all eligible for election funding from the AEC.

Once it is determined that a candidate has reached the 4 per cent threshold, the AEC automatically provides the candidate with a CPI-indexed payment of $10,000.

The $2.90 per vote figure mentioned in the Facebook post becomes relevant when a candidate claims more than the $10,000.

The AEC multiplies the $2.90 figure by the number of first preference votes received by the candidate to determine their “election funding entitlement”.

But, the candidate is only paid the lesser amount of either this election funding entitlement or their “demonstrated electoral expenditure”.

Importantly, candidates must lodge a claim to the AEC that provides evidence of their demonstrated electoral expenditure to receive either of the above payments.