Free market think tank the Institute of Public Affairs (IPA) has published a series of posts, refuting concerns of coral bleaching in the Great Barrier Reef, saying there is evidence of a “coral wonderland” at the centre of the latest bleaching event.

On 11 April, IPA senior fellow Jennifer Marohasy published a blog titled "Epicentre of Mass Coral Bleaching - Still so beautiful (Part 1)", which the IPA published and posted on its Facebook page. The article begins:

“It is all over the news, right across the world: the Great Barrier Reef is bleaching – again.  Children can’t sleep at night: it is not only the war in the Ukraine keeping them awake at night, but also our apparent disregard for nature.

On 10th April 2022 I went to the very epicentre of the claimed latest severe mass coral bleaching, and found a coral wonderland.

There was some bleaching, especially around the perimeter of John Brewer Reef – on the sandy sea floor where the Australian Institute of Marine Science (AIMS) surveyed and concluded coral cover is never more than 30% – but most of John Brewer Reef is still covered in more than 80% colourful corals. This high percentage is denied by AIMS because they never survey the reef crest.”

The article continues with Dr Marohasy explaining that she swam around the John Brewer Reef in April and found colourful coral regenerating, dismissing claims that the reef is seriously threatened by mass bleaching events.

But experts consulted by RMIT FactLab said Dr Marohasy’s claims of regeneration on the John Brewer Reef cannot be extrapolated to indicate good health in the reef overall.

The John Brewer Reef is located 70 kilometres from Townsville and is one of 3000 reefs in the Great Barrier Reef. It has important cultural connections to the Manbarra Peoples of Palm Island and is a popular tourist attraction. 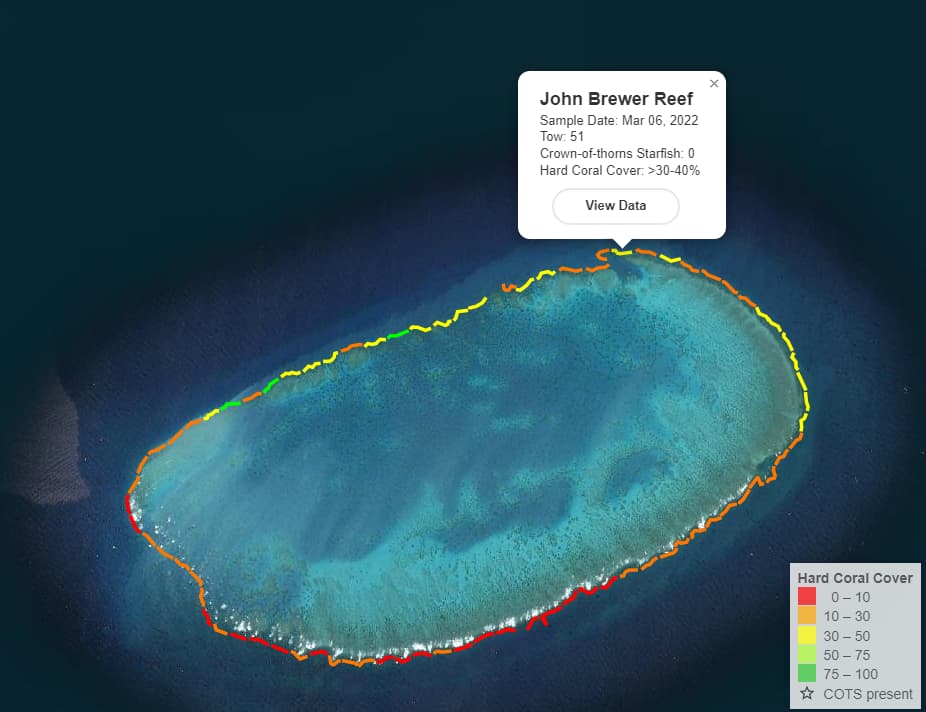 In one post Dr Marohasy, who holds a bachelor's degree in science and a PhD in weed biocontrol, said she had visited the reef and found it was “spectacularly healthy”.

“There was some bleaching, especially around the perimeter of John Brewer Reef – on the sandy sea floor where the Australian Institute of Marine Science (AIMS) surveyed and concluded coral cover is never more than 30% – but most of John Brewer Reef is still covered in more than 80% colourful corals. This high percentage is denied by AIMS because they never survey the reef crest.”

Coral reef ecologist Dr Mike Emslie from the Australian Institute of Marine Science told RMIT FactLab that most recent surveys of the reef showed reef-wide coral cover was 21.8%, and at times had reached above 30 per cent, including in 1998 and 2015-17, contrary to Dr Marohasy’s assertion. 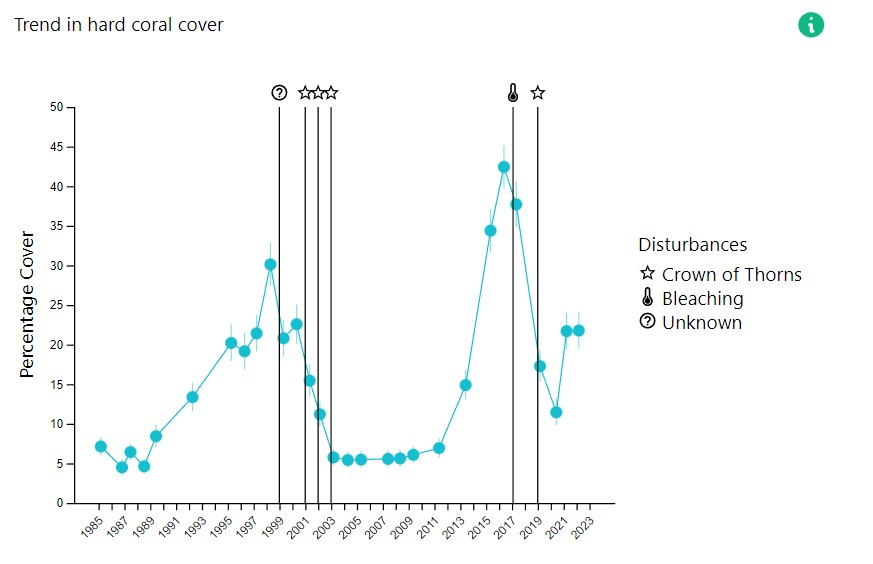 “Dr Marohasy’s assertion that most of JB is still covered in more than 80% colourful corals is an extrapolation based on what she saw at the one site she visited,” he said. “Her observations illustrate that there are still fantastic spots out on the Great Barrier Reef but visiting a single reef can never give a complete picture of the Great Barrier Reef.”

The impact of coral bleaching on a large stretch of the Great Barrier Reef in which the John Brewer Reef lies was rated as “major to severe", with 30 to 60 per cent of the coral being exposed to bleaching, he said.

Dr Emslie said Dr Marohasy was correct that coral can recover quickly after a bleaching event and her photograph did show evidence of healthy coral, but it was important not to generalise healthy coral in one part of the reef as an indicator of overall health.

“You cannot extrapolate the amount of coral at one small section of reef to the whole of John Brewer Reef; it is 15 kilometres in circumference. Nor can you make an assessment on the health of an ecosystem the size of Italy by just looking at one reef.”

Coral cover is only one metric used to measure reef health. Other indicators include coral diversity, size, structure and assemblages of corals, which Dr Emslie said can take decades to recover to their pre-disturbance levels.

He said the event was unlikely to result in widespread loss of coral but would weaken the biodiversity and resilience of the reef.

He said AIMS surveys the reef slope rather than reef crest as the reef slope “is typically the most diverse habitat and the most practical for our survey sites”. This has been the standard practice in the past 35 years of monitoring.

Dr Marohasy published a second blog article in July (and reshared to Facebook) in which she described a recent trip to the reef where she took underwater photographs of the coral.

In her blog, Dr Marohasy said the affected coral had returned to a “healthy beige”, contrasting photographs from The Guardian, taken of the reef during the bleaching event, with her own photos.

The coral appeared “to have made a full recovery in less than three months” rather than the 12 years suggested at the time of the bleaching event, she wrote. 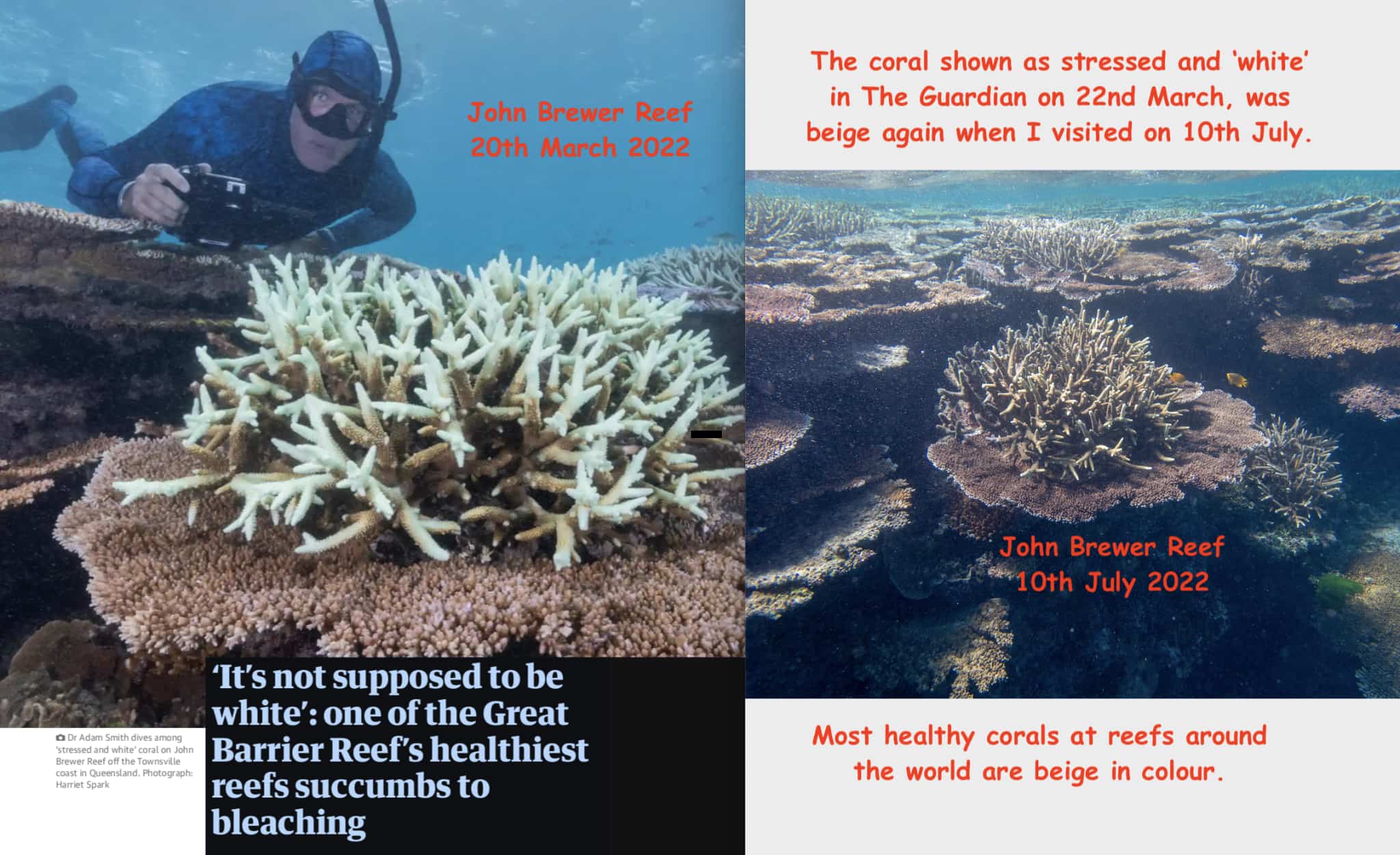 Professor Terry Hughes, an Emeritus Professor at the ARC Centre of Excellence for Coral Reef Studies, told FactLab: “The IPA’s campaign around coral bleaching and reef health has no scientific basis.”

Agreeing with AIMS, Professor Hughes said Dr Marohasy’s photographs are not scientifically valid for representing reef health. He told FactLab photographs and personal accounts are always subjective, dependent on “when you go and where you go”.

Professor Hughes said current reef records are derived from Manta Tow surveys conducted by AIMS. “These are scientifically rigorous as they survey the entire periphery of a reef, stopping every 2 minutes to sample coral,” he said.

“That way it is not biased towards the parts of the reef that look nicer or for the worse, like in a photograph,” he said.

He also said the appearance of coral does not always indicate health. Corals such as pictured in Dr Marahasy’s article (Acropora) are fast growing, weedy corals that are vulnerable  to future bleaching.

“Similar to a bushfire that has burnt down trees and grasses, grass may be the first to regrow, but it is also the first to burn in the event of another bushfire,” he said.

Professor Smith told RMIT Factlab that while he thought some of IPA’s claims in the article may be unsubstantiated, he had “no strong science to refute them”.

He said researchers are seeing a mixed result of reef recovery from the monitoring so far.

Concern over the health of the Great Barrier Reef is “not alarmist” as the reef has lost 50 per cent of coral in the last three decades, he said.

He said the extent of coral bleaching earlier this year was a “shock” to many in the scientific community and it had prompted him to publish an article in the Conversation expressing concern for the potential damage caused by the event.

This year's event was of special concern because bleaching events, usually caused by a hot climate, are unprecedented in a wetter period typical of a La Niña weather pattern.  It is the fourth mass bleaching event to occur on the Great Barrier Reef since 2016.

According to the GBRMPA Reef Health updates, the extent of  coral recovery versus mortality will be better known once the long-term monitoring program surveys of the reef are completed in April 2023.

Last week, Environment Minister Tanya Plibersek released the State of the Environment report in her National Press Club address, noting coral bleaching and the deteriorating health of the Great Barrier Reef and promising to set a domestic target to protect 30% of land and sea areas by 2030.

The IPA and Dr Marohasy have a history of disputing the extent of coral bleaching in the Great Barrier Reef. In October 2020, the IPA republished an article that Dr Marohasy had written for The Australian, titled Scientists All At Sea With Alarmist Barrier Reef Warning.