No, the Victorian government is not introducing new fines for park use

No, the Victorian government is not introducing new fines for park use

The Victorian government is updating regional and metropolitan parks regulations, but there are no plans to introduce steep new fines or impose prohibitive restrictions as has been claimed online.

The proposed changes will modernise existing regulations, many of which expire in March 2023. The updated regulations will also apply to many parks which are presently unregulated, according to the government’s consultation paper.

But online users and news organisations have claimed the changes include hefty new fines and severe regulations. Claims include that there will be a new $1,849 fine for engaging in recreational park activity without a permit, restrictions on group gatherings, firewood collection, swimming and bushwalking.

An article published by the Daily Mail claims: “'Dictator Dan's' new nanny state rules mean you'll need a PERMIT to swim in a billabong - and straying off a park track could cost you hundreds.”

And an article published by News.com says the “new rules” mean park visitors could be fined $1,472 for interfering with park biodiversity or $924 for walking off a park trail. The article also quoted Victorian Liberal MP James Newbury as saying the changes meant “rocks in parks have more rights” than park visitors.

Social media users who shared the claims have described the changes as ‘draconian’ and 'nanny state' measures. The claims have also been re-shared by Liberal politicians Wendy Lovell and Brad Battin, and political candidate Greg Cheesman.

But the fines listed by online users and the news articles already apply. 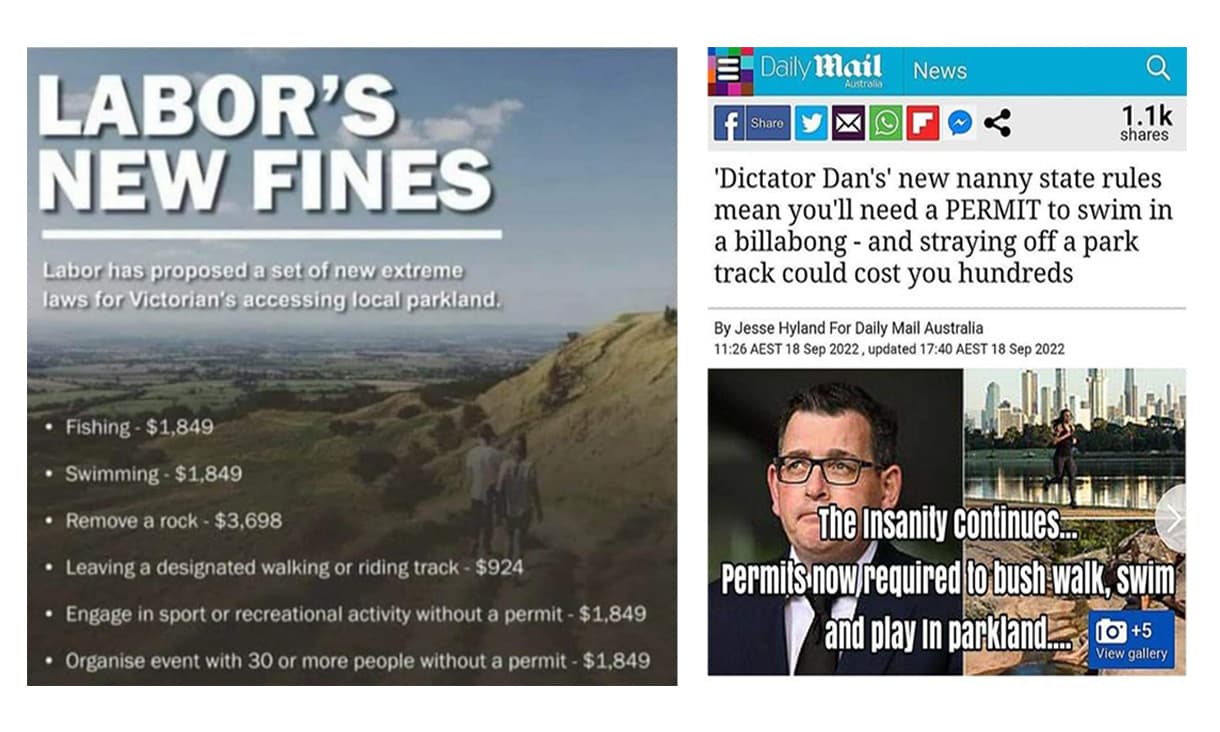 Once completed, the government's changes will streamline the Victorian Department of Environment, Land, Water and Planning (DELWP) powers to determine which activities are permitted, restricted or prohibited in regional and metropolitan parks. The department says there are no plans to ban swimming or bushwalking where it is already permitted.

Matt Ruchel, executive director of the Victoria National Parks Association (VNPA), told RMIT FactLab "the fines do exist, but they are nothing new" as they are already in existing legislation.

For example, the Daily Mail’s claim that “Victorians must not fill up [refuel] a chainsaw while collecting firewood unless the chainsaw is on an impermeable surface” already applies in the current regulations cited on the Victorian government website.

Victorian regional and metropolitan parks are managed under the Crown Land Act 1978.

Mr Ruchel said the proposed changes seek to “consolidate” current park regulations into a single regulatory document. This includes helping to “align regulations” with existing laws that protect Aboriginal heritage, wildlife and firewood access and provide for technological changes such as drones and e-bikes not covered in existing regulations.

“The new regulations are certainly not impinging on public rights,” said Mr Ruchel. “In my experience they [regulations] are used sparingly, sort of residual powers to encourage appropriate behaviours and often linked to other management strategies.”

A DEWLP spokesperson told RMIT FactLab, “The proposed regulation changes simply intend to modernise and consolidate existing regulations and allow for better management of our parks, including replacing the outdated Crown Land Regulations which relate to a smaller number of parks.

“They have all been drafted to support current activities and will only be used to restrict an activity when necessary to protect biodiversity, regenerating habitat, sensitive cultural heritage or as a public safety precaution.”

"The regulations do not restrict any activities that are currently allowed. People can still climb, bushwalk, swim and enjoy Victoria's public land in the exact same [way] they have been previously,” a DEWLP spokesperson told the ABC.

Activities will only be restricted or prohibited for specific reasons such as protecting cultural heritage and biodiversity, or for public safety.

Swimming is already prohibited in metropolitan parks, but will continue to be permitted in regional parks where it is currently allowed.