Did someone in Scott Morrison's cabinet really say there is 'no such thing as poverty'?

Did someone in Scott Morrison's cabinet really say there is 'no such thing as poverty'?

A meme alleging Anne Ruston said there was “no such thing as poverty" has been shared widely online, but RMIT FactLab has been unable to find a source for the supposed quote.

A meme featuring a photo of Social Services Minister Anne Ruston overlaid with the words "No such thing as poverty" and an attribution to Senator Ruston, has racked up close to 3,000 interactions on Facebook and Twitter since February. 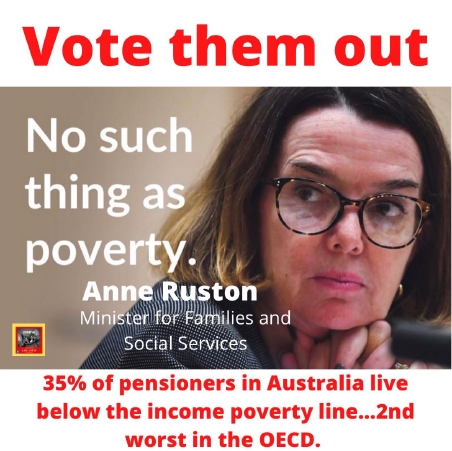 An earlier post from February 18, this one featuring a version of the meme which less conclusively links the quote Senator Ruston, suggests she had “refused[d] to accept" there was poverty in Australia during a senate hearing the previous day.

But a search of the Senate Hansard, news articles and Senator Ruston’s online posts and media appearances came up empty for the quote.

While Senator Ruston did speak about poverty at the February 17 Senate Estimates hearing for the Community Affairs Legislation Committee, she did not say there was “no such thing as poverty".

Rather, in answer to questions about the JobKeeper unemployment benefit rate in relation to the poverty line, the Minister said there were “many definitions of ‘poverty’”, and that coming up with a definitive measure was “complex”.

“It's very complex. This idea that you are going to have a couple of lines that define something—I think it's an oversimplification of what is a very complex issue,” she said.

“A narrow definition of poverty is not something that the government has ever sought, and doesn't have, and it has been the practice of successive governments to be much more targeted and focused around the development of payments,” she said during an October 2020 hearing.

In March 2021, meanwhile, Senator Ruston told Fran Kelly on ABC Breakfast that “we need to be very careful about making a judgement in relation to poverty", saying that she did not agree with Kelly that there was a well-established poverty line measure.

The meme also includes a claim that “35 per cent of pensioners in Australia live below the poverty line", which supposedly puts Australia second last on that measure in the OECD.

FactLab has previously fact checked a variation of this claim as part of its email newsletter, CheckMate.

According to the OECD's latest data, published in July 2021, the proportion of Australians aged 65 and over in relative income poverty — defined as "having an income below half the national median equivalised household disposable income" — was 23.7 per cent, or more than 10 percentage points lower than claimed in the meme.

At that rate, Australia ranks sixth worst out of the 38 OECD nations when it comes to old age income poverty.

It's also worth noting that some experts have previously taken issue with the OECD's old-age poverty measure.

In a 2019 article, for example, the Grattan Institute's Brendan Coates and Tony Chen called the measure "deeply flawed".

"Small changes in reality produce apparently very different outcomes, calculation of the benchmark rests on arbitrary definitions of equivalisation, it does not take into account drawdowns on savings outside superannuation, and it does not adequately account for housing costs," the pair wrote.

According to the Grattan researchers, taking the benefits of home ownership into account halved the proportion of older Australians considered to be in poverty.