The project was a collaboration between RMIT/SGSC/Dr Hunt and the Humanitarian Advisory Group (HAG) on behalf of the Australian Federal Government’s Australian Civil-Military Centre (ACMC). The Handbook constitutes part of an emerging national framework for the Protection of Civilians in Armed Conflict. Dr Hunt said that “This is a great example of the Australian Government demonstrating leadership in response to the UN Secretary-General’s call for UN member States to 'domesticate' the protection of civilians by developing national policy and guidance architecture.”

The Handbook provides real-world examples, tools and resources intended for the wide range of actors - civilian, military, government, non-government and communities themselves - who contribute to safeguarding populations in different ways. It aims to provide the ‘what’, the ‘why’ and the ‘how’ of protecting civilians in violent contexts.

Dr Hunt added that “The Handbook addresses how the promotion of peace, justice and strong institutions – as well as better understanding the linkages between them – is part of creating a protective environment for vulnerable populations in conflict-affected societies. This is precisely what SDG16 is about.”

In relating the Protection of Civilians to other global agendas such as Women, Peace & Security, Children and Armed Conflict, the Agenda for Humanity and Sustaining Peace, the work also contributes to the 2030 agenda for sustainable development more generally. 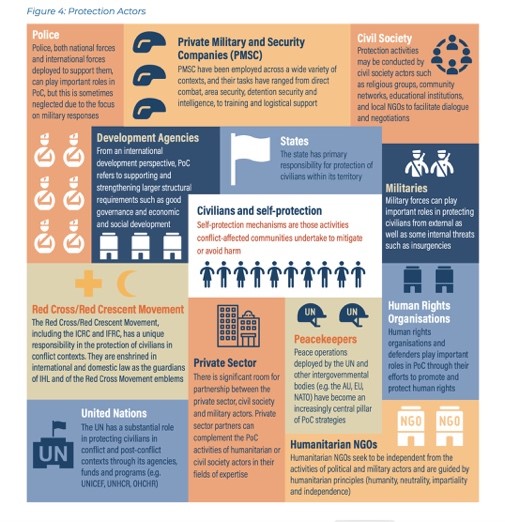 Excerpt from Dr ‘From Principle to Practice: Protecting Civilians in Violent Contexts’ handbook