Alumni spotlight: How shooting for the stars paid off for this space industry leader

Alumni spotlight: How shooting for the stars paid off for this space industry leader

Alumni / Stories / Alumni spotlight: How shooting for the stars paid off for this space industry leader

He never dreamed of working in the space industry, but now he’s a leader in the joint NASA team developing the James Webb Space Telescope.

Originally Marc’s passion was in aviation – an interest sparked by his dad’s love of aircraft. After highschool he enrolled in an aviation degree at RMIT before swapping into the Bachelor of Engineering (Aerospace Engineering) (Honours).

“Aviation was where I wanted to start,” he explained.

“I never thought I’d work in the space industry because I wanted to be a pilot, but after a year I realised the aerospace components were cool.” 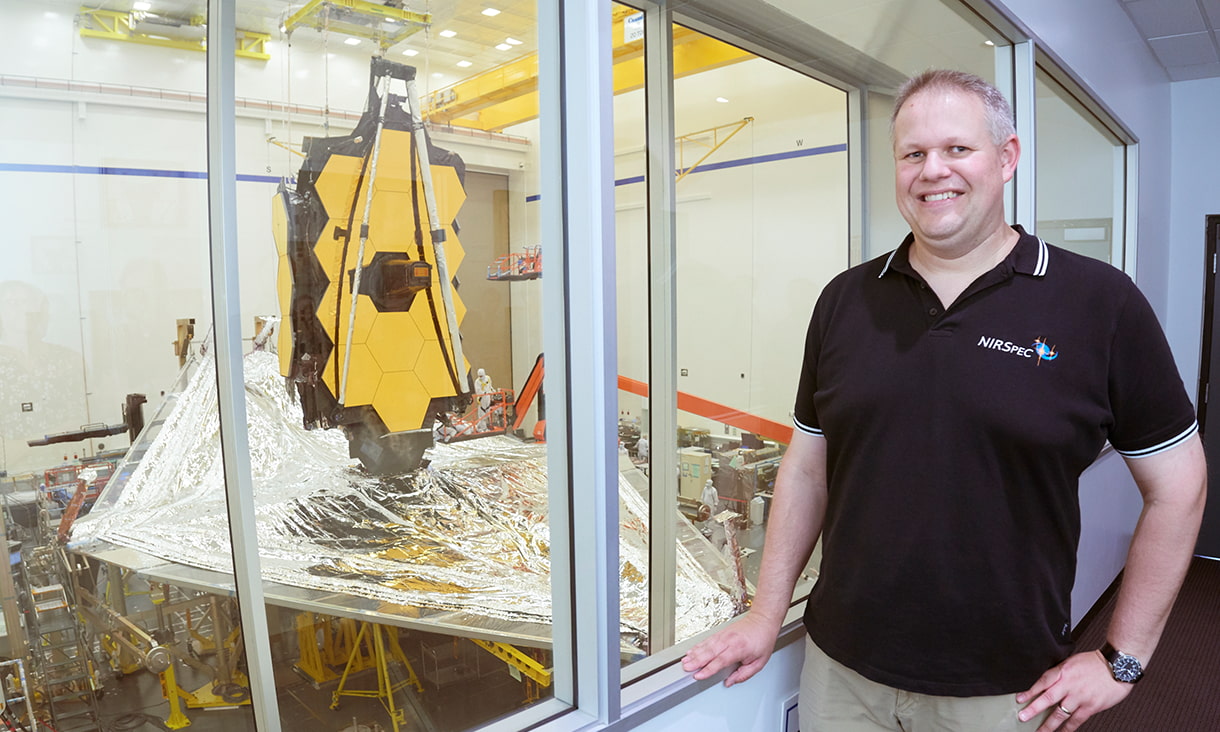 Once he started studying aerospace, Marc never looked back.

He took part in the RMIT International Industry Experience and Research Program (RIIERP) and travelled to Germany to begin an internship with European aerospace company Airbus in 2004.

Thanks to his German-speaking parents and his ability to speak fluent German, Marc easily made himself at home. Today he continues to work for Airbus in Germany and is now head of the thermal products and analysis department.

“I work with an international team – Dutch, Austrian, Italians, Swiss, French. It makes it very interesting because people from different countries and experiences bring different ways of working into a system,” he said.

Opening a view to lightyears away

Marc is in charge of a specialised space instrument called a Near InfraRed Spectrograph or NIRSpec, which is used in collaboration with NASA, the European Space Agency and the Canadian Space Agency to power the James Webb Space Telescope.

The telescope generated incredibles images of the Cosmic Cliffs – a region roughly 7,600 light-years away – and made worldwide headlines in July.

After 17 years of working on the telescope, Marc said it was a watershed moment for him and his team.

“I had a small set up where I had about 10 guys who worked on the project sitting together and you could see there were a fair few people with tears welling up in their eyes.

“After all this time finally getting to see that all the hard work, over so many years, that was put into this telescope is now paying off with such fantastic pictures was and still is such an amazing feeling!”

Marc finished the bulk of his work on the NirSpec in 2013, but continued to test it every year thereafter.

He is now part of a team working on the JUpiter ICy moons Explorer, or JUICE – a spacecraft that will explore the three icy moons of Jupiter. Organised by the European Space Agency, the spacecraft will launch in August 2023 and arrive at Jupiter in 2031.

Why space research makes a difference

Marc said his work with space is always stimulating, but sometimes he does get questions from people outside the industry about whether it’s worth all the expense and effort.

“You see these pictures on television of these beautiful galaxies, but you sort of go, ‘Was that worth spending $10 billion on?’”

“There’s two parts to it and both make the world a better place. [The first is that] it inspires people and gives them hope and happiness.”

“The other side is a lot of the space technologies that are being developed and the processes behind them are used in our daily lives.”

“Navigation devices, mobile phones – there’s just so much stuff that you don’t realise that comes from the space industry.”

Marc said the Bachelor of Engineering (Honours) in Aerospace gave him the fundamental skills and knowledge he still uses to this day and credits the RIIERP with launching his space career.

“What I learned at RMIT with the degree was invaluable in my day-to-day engineering work, so how you work and the knowledge you learn,” he said.

“And the really important thing that RMIT did was open the door for me to get the job here through the RIIERP.”

If you’re an RMIT alumni and want to share your career experiences, let us know.

How to transition into a leadership role

Wondering how to become a manager for the first time? Here are our top tips to stay a step ahead of the learning curve.

Pat Langton and Lauren Phillips graduated from different RMIT courses a decade apart. Now, they find themselves working together at the top of their game in marketing and advertising.

How Jamil steered his career from advertising to business tech

RMIT alumni Jamil Luketic graduated with a love for media and quickly found a new job at Channel 9, but then a pathway into tech and entrepreneurship opened and he’s never looked back.