Nguyen’s love for cooking and his passion for spreading Vietnamese cuisine and culture around the world have earned him an international reputation as a respected and celebrated chef and restaurateur. 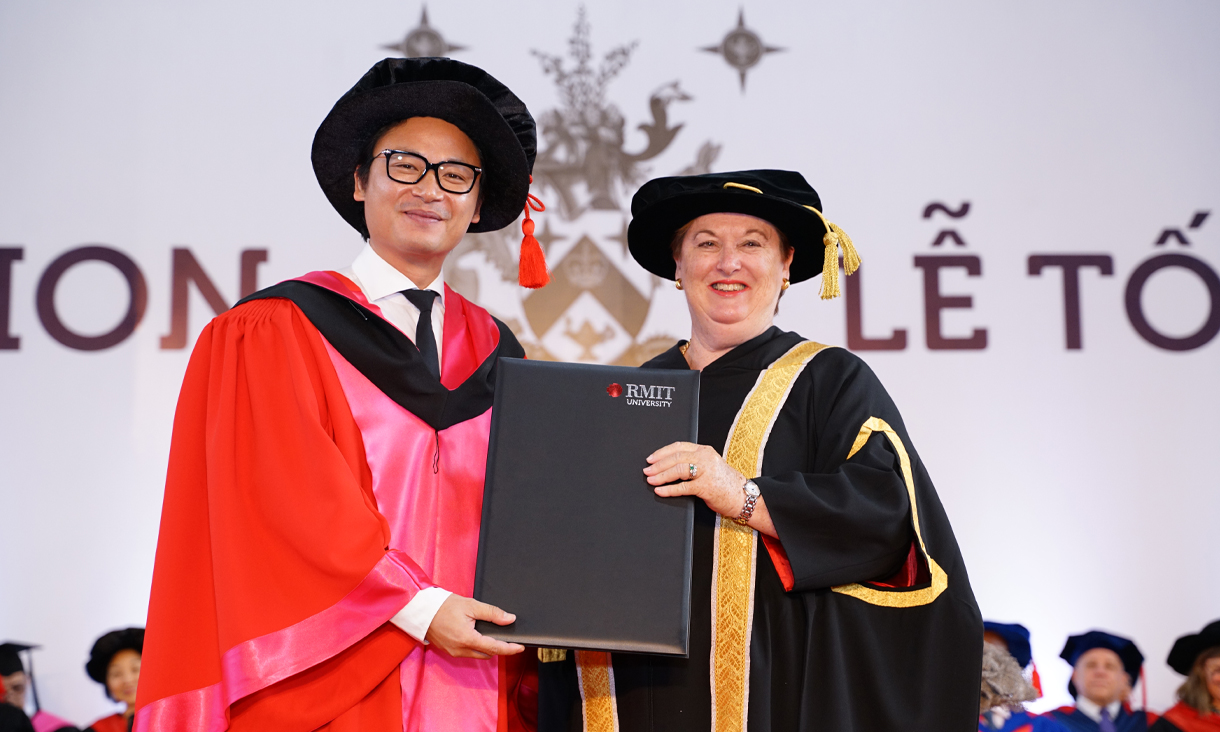 Vietnamese–Australian celebrity chef and restaurateur Luke Nguyen (left) was awarded an RMIT Honorary Doctorate for his distinguished culinary contributions to the wider community.

Speaking at the this week’s graduation ceremony in Ho Chi Minh, Nguyen said food had always played a major role in his life for as long as he could remember.

“My great passion is food, its history, its people and the culture,” he said.

“It’s all of these things that make food so special to me.”

From a young age, Nguyen wanted to open his own restaurant, a dream which finally came true when at age 23, he opened his first restaurant, Red Lantern, in Surrey Hills, Sydney – despite being told he was too young and inexperienced.

“People thought I was crazy; they said I was too young, too inexperienced, and that a Vietnamese restaurant does not belong in the inner city,” he said.

Now, the establishment is the most awarded Vietnamese restaurant in the world.

Nguyen said this dream may not have become a reality if he had not believed in himself and pursued his dream.

He emphasised to all new RMIT graduates that he could not have achieved all this without hard work, persistence, drive and great passion.

“Always believe in yourself, don’t leave yourself wondering ‘what if’, be passionate about whatever you do, and never stop learning,” he said.

After the success of Red Lantern, Nguyen continued to open award-winning establishments around the world including the Fat Noodle, an Asian Noodle Bar at The Star in Sydney and The Treasury in Brisbane.

Ten years ago, his dream grew beyond restaurants – he knew he wanted to share his passion for Vietnamese cuisine and culture with the world.

“I wanted to create an authentic cooking and travel TV series through this wonderful country [Vietnam], and showcase the delicious street food of Vietnam – the food that inspires me every day.” he said.

Since then, Nguyen has filmed and produced nine TV series, including Luke Nguyen’s Vietnam, Luke Nguyen’s Greater Mekong and Luke Nguyen’s UK, which have been televised in 150 countries around the world and is also the author of numerous bestselling and award-winning cookbooks.

In 2011, he was inducted into Australia’s Sydney Morning Herald’s Food Hall of Fame for his cooking and culinary travel programs.

His final piece of advice to graduates was to make sure they were passionate about what they chose to do after university.

“If you’re passionate, the whole world will feel and share your passion,” he said.

RMIT is investing $6 million in its world-leading Blockchain Innovation Hub (BIH), cementing the University’s position as a leader in research and engagement within the new blockchain empowered economy.