Machine lullaby shows tech in bed can help you rest 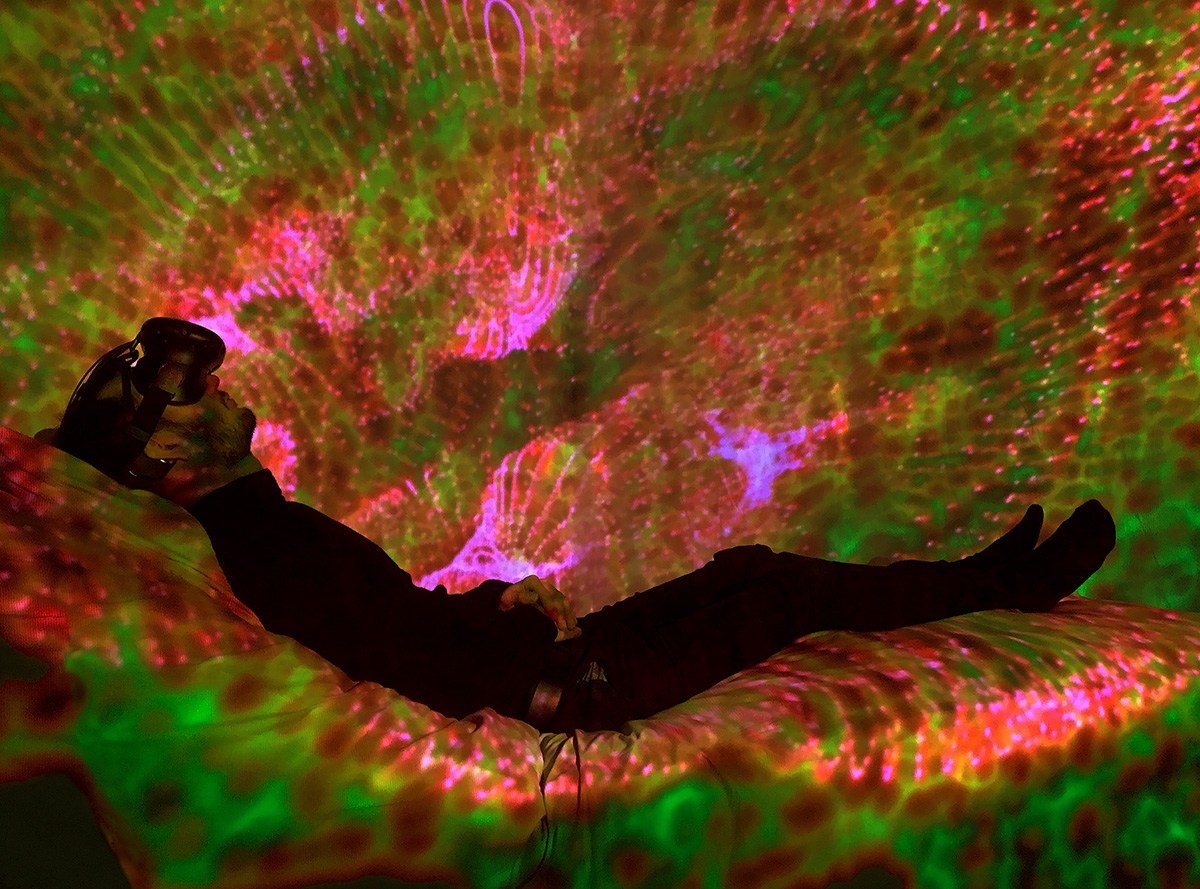 Machine lullaby shows tech in bed can help you rest

Art meets technology for this immersive VR experience that can ease you into the right frame of mind for sleep.

Designed by PluginHUMAN art duo Dr Betty Sargeant and Justin Dwyer, Inter-Dream involves an interactive bed and ambient music controlled by the artists, and kaleidoscopic visuals controlled by the user with their own brainwaves, via EEG.

“Technology and sleep are always talked about as incompatible,” Semertzidis says.

“Our findings flip that notion upside down and show how technology can also aid rest and relaxation.”

Analysis of physiological and psychological data along with user interviews were recently presented at the premier international conference of Human-Computer Interaction, CHI 2019.

“EEG readings were also indicative of restorative restfulness and a clear mind, while interview responses described experiences of mindfulness.”

Good sleep is acknowledged to be preceded by a characteristic set of specific cognitive and mood states, as well as physiological changes, says Semertzidis.

“Good sleepers are generally more relaxed and positive, while bad sleepers are more likely to focus on unpleasant and intrusive worries and stressors because of involuntary mental rehearsal of the past day’s events,” he says.

“It makes sense that influencing these cognitive mood states can help us better ease into rest.”

Semertzidis says people not only passively relaxed into the experience but creatively interacted with it too.

“Some of them reported really going on a journey by manipulating the system with their minds,” he says.

“This is no trivial notion in the context of inducing positive pre-sleep states, as it has been well documented that creative expression is strongly associated with positive effects on emotion and affect.”

Another prevalent theme from the 12 user interviews was cognitive states consistent with those of mindfulness.

“This was often voiced as a redirection of thought away from life stressors and toward the present experience as a result of the system's neurofeedback reactivity,” he says.

Semertzidis’ supervisor and co-author on the paper, Associate Professor Fabio Zambetta, said while the system itself was not the answer to healthy sleep - clinical interventions would require larger samples and control groups, and technology would need to be explored that was less invasive during sleep – it presented a fascinating case study.

"The work really puts the human body centre stage, allowing us to see the human body not just as a mere input controller, but rather allowing people to experience their bodies as play," Mueller said.

"For me, this is a beginning to facilitate a more playful future, in particular, one where we can even experience rest and ultimately sleep as a form of (digital) play: it would be fascinating to explore what such a future could look like and we are always looking for PhD candidates who want to explore this.“

PluginHUMAN are creators-in-residence at the RMIT University’s Exertion Games Lab.

Big data means big opportunity, but what are the ethical implications of tapping into health data as a public resource? And are we even collecting what we need?

A new cybersecurity course developed in partnership with industry is set to arm people with the skills needed to protect their digital assets.

Graduate research grants for smarter cars of the future

Three RMIT research projects have been awarded grants totalling over $780,000 to modernise the Australian automotive industry.