RedbackBots on the road to Bordeaux 2020

RedbackBots on the road to Bordeaux 2020

RMIT has named its squad to compete at the largest robotics and artificial intelligence competition in the world.

Events include emergency rescue and logistical challenges, but the headline event is humanoid football featuring state-of-the-art, fully autonomous Nao robots that think and act for themselves.

Team Coach and winner of multiple RoboCup sub-leagues, Dr Timothy Wiley, has been involved in the event since 2010 as both a competitor and team leader and knows what awaits them.

He says the highly competitive environment presents an ideal platform for students to learn about the challenges of autonomous robotics, and also for researchers to apply their latest advances. 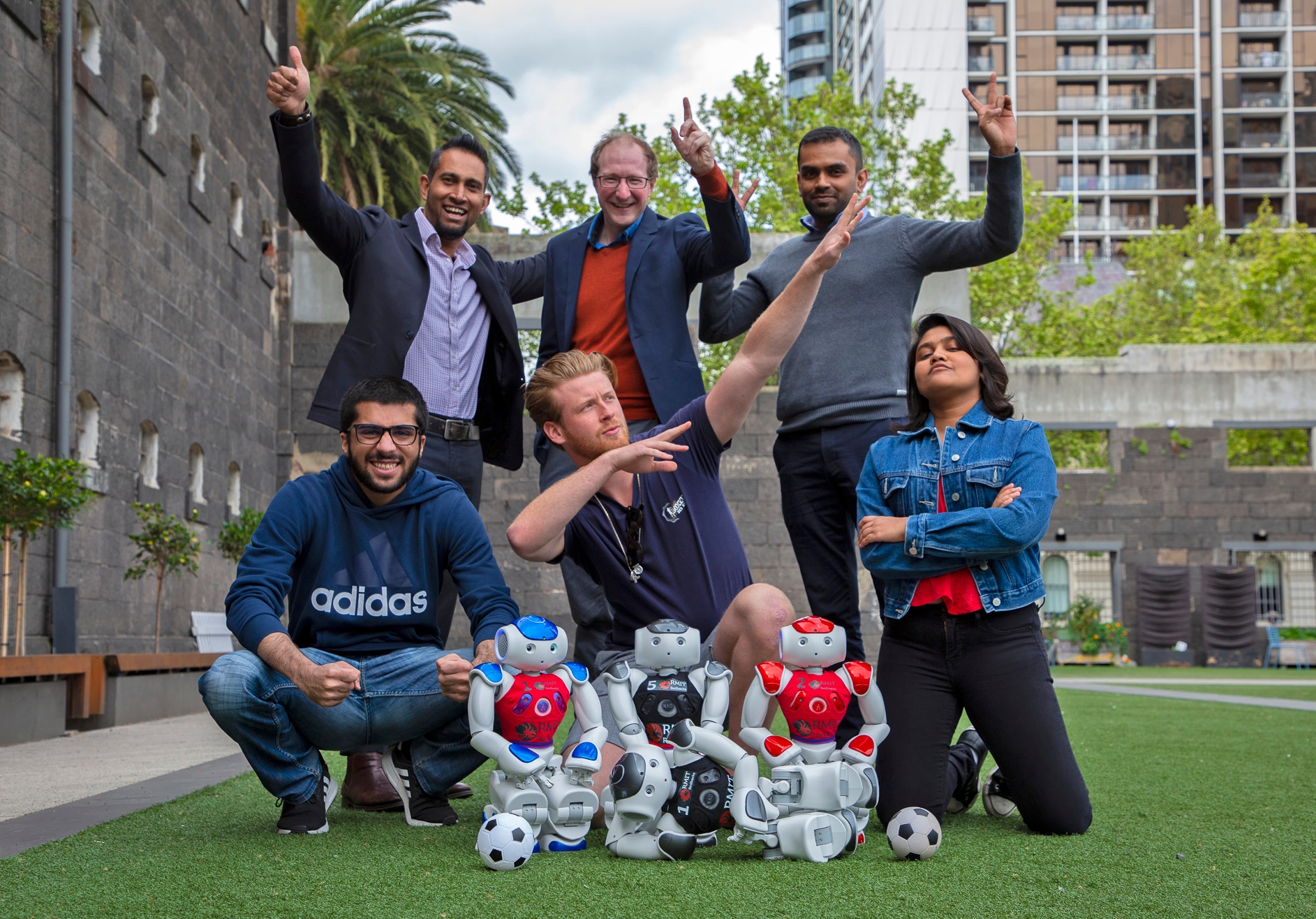 Team Manager, Professor John Thangarajah, is another experienced campaigner and returns to the competition after 20 years.

Thangarajah competed in one of the original leagues back in 1999 as a young computer science graduate.

The basic, low-cost robots back then looked a bit like old stereos rolling around and crashing into one another, in pursuits of an orange golf ball, but he loved it all the same.

“It really captured my imagination and opened up the world of AI for me,” he says.

At RoboCup 2001 in Seattle, he competed in the simulation league - literally simulated soccer on a computer screen - and heard Bill Gates speak at a conference there on the challenges and opportunities of AI, long before most people knew how big it was going to become.

That fresh-faced graduate in awe of Bill Gates, who wanted to learn more about AI, now heads up RMIT’s AI Innovation Lab.

“Now, 20 years since my last appearance, and after several years working to get RMIT back into the competition, I’m finally going back to RoboCup,” he says.

“This is going to be awesome!”

Crowds watching humanoid football at this year's RoboCup 2019 in Sydney.

Assistant coach, Dr Ruwan Tennakoon, specialises in computer vision applications - like the collision avoidance system for forklifts he recently developed - and can’t wait to test his latest algorithms and techniques in a new setting.

Computer Science student Talal Meshari will be working with Tennakoon on the computer vision and sees it as his “chance to learn from the very best”.

“I bring enthusiasm, a willingness to learn, and hope,” Meshari says.

Kodikara says she first “fell in love” with the soccer-playing robots at RMIT Open Day in 2018, while volunteering as a student ambassador for software Engineering.

“I've always wanted to work in the field of AI and robotics so I was fascinated when I saw the cute Nao robots dancing on the stage,” she says.

“Luckily for me, John Thangarajah saw me staring at the robots and approached me and asked if I'd like to join his robot soccer team and from that moment onwards I was hooked. I love, love, love robots!” Kodikara says. 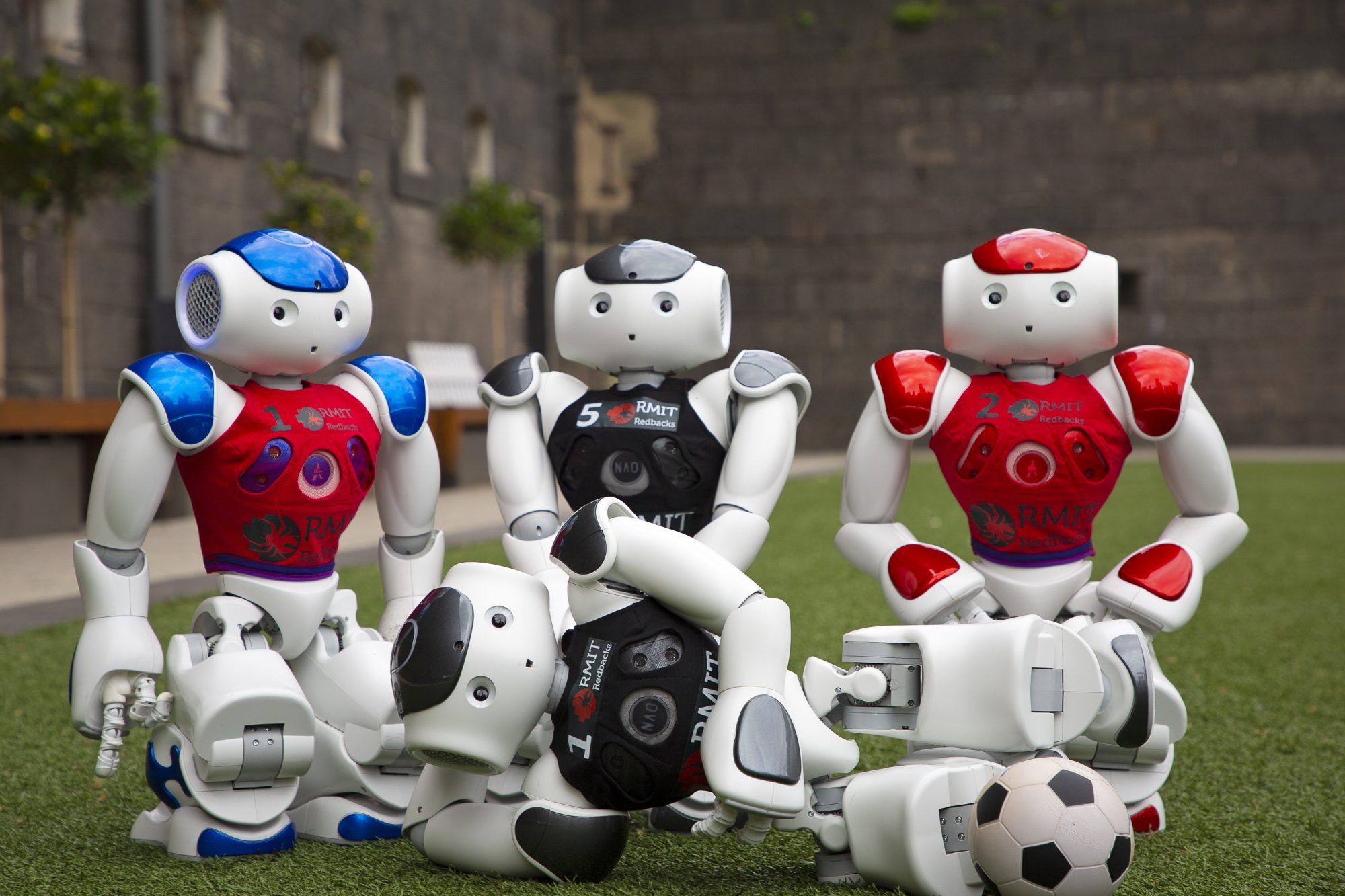 The RMIT RedbackBots: these Nao humanoids will be programmed before competition and cannot be re-programmed once the game starts.

Fellow student Sam Komesarook fancies his programming skills and has wanted to apply them to advanced robotics for some time. Now he's doing just that with some of the university’s best.

“My favourite moments are the ones when the models we spend weeks, if not months, refining finally deliver some astounding results. It’s then that I’m reminded of my awe of this field, and how much it has to contribute to us as a society,” he says.

“So far, I have been responsible for the scripting tools we write to sync the bots, and the music we play during our hacking sessions. I take both jobs very seriously!”

But along with the experience of leading AI researchers, the enthusiasm of youth and of course the motivational music, this team may have one more trick up their sleeves - an original tweak to the Nao robots, which they say will give them the edge in Bordeaux.

Komesarook can’t give details but says, just like HAL-9000 from the Space Oddessy series, their bots will have the survival instincts and creativity to outsmart all competition.

“We are playing to win, simple as that,” he says

Pop megastar Beyoncé sang about girls running the world and that’s what more than 500 school students were empowered to do at the Girled World WOW Summit at RMIT.

EnGenius 2017 showcases the future in engineering design to industry

Researchers are installing sensors throughout the summer hotspot of Rye to monitor traffic, parking, crowd numbers and even toilet usage to better manage holiday crowds.