The magnificent Capitol played host to a lively discussion on the challenge for organisations to lead with their values while fulfilling their imperative for economic growth.

Leading thinkers from the fashion, finance and technology industries shared their views on ethical empire building with staff, students, alumni and industry partners at the SHIFT event.

RMIT Vice Chancellor and President Martin Bean CBE welcomed audiences to SHIFT, and the opportunity to delve into the fast-changing world of work and debate the topic of ethical empire building.

A generational shift in expectation of accountability is evident, with 86% of consumers wanting companies to stand for something (Forbes, 2018), and 75% of millennials saying they would take a pay cut to work for a socially responsible company (Weconomy, 2019). 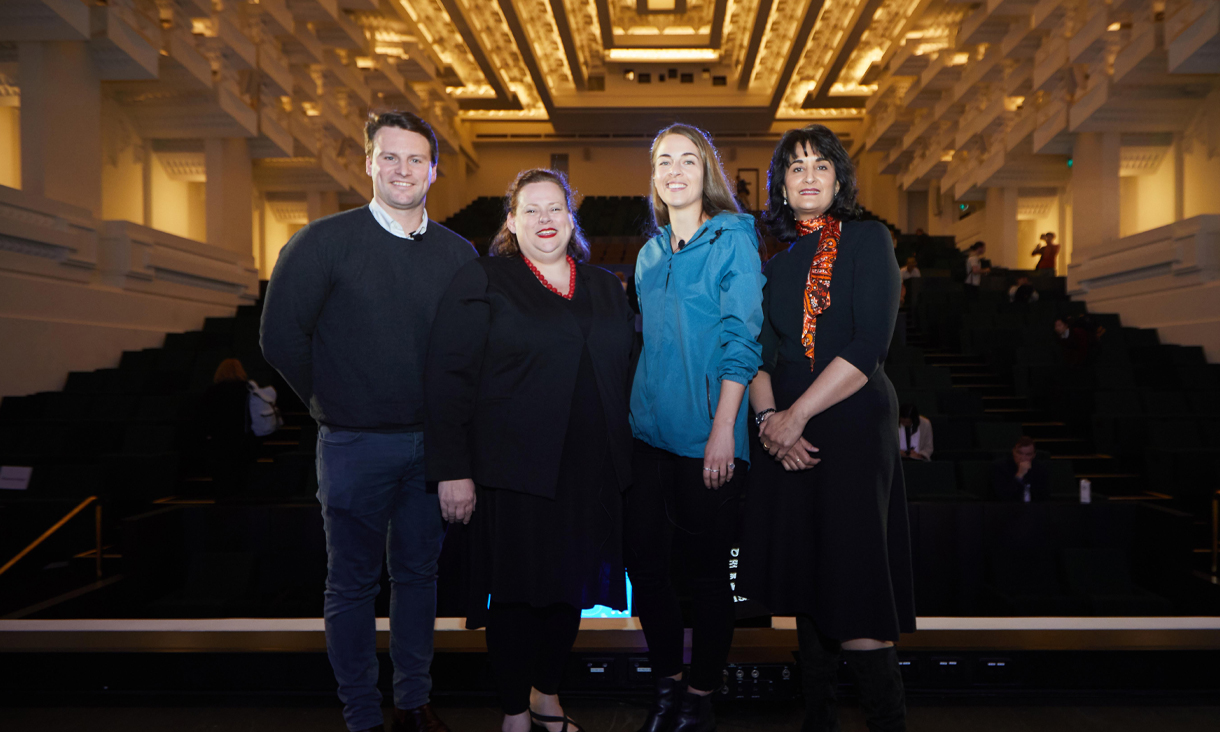 RMIT alumnus Rhianna Knight is founder of Team Timbuktu, a sustainable direct-to-consumer apparel brand, that uses fabrics made from recycled plastic bottles to create clothes made for movement and the outdoors.

With an estimated 10,000 plastic bottles recycled in just the first 12 months of business, the brand is making a positive impact on the environment.

However, further such initiatives are needed, with the global fashion industry accounting for more carbon dioxide emissions than all international flights and maritime shipping annually, Knight said.

“Our instant desire for gratification through fashion is negatively impacting not just the planet but people.

“Globally there are approximately 40 million garment workers and 85% of them are women who are stuck in poverty due to the conditions they work in.

“There’s no need to compromise between people, planet and profit, and those who do are compromising on their future success,” Knight said.

Venture capital fund Carthona Capital’s Damian Fox said ethics was no afterthought in the world of venture capital and went to the crux of any investment decision process.

The fund invests in world leading technology-based start-ups both in Australia and globally and he said venture capital funds had a critical role to play in ethical empire building.

“Venture capital investments, by their nature, have a huge influence on the future of society. It is fundamental that any such investment consider ethical implications.”

“It’s important that business sets up its own framework to make sure both ethical and non-ethical issues are dealt with at the point of investment and on an ongoing basis,” Fox said.

Tackling the issue of ethics and Artificial Intelligence (AI), international expert on innovation and impact Kelly Hutchinson posed the question around what type of future did we want – a utopian or dystopian one?

Working at the intersection of tech and social, Hutchinson is also Deputy Chair of the Pearcey Foundation, which celebrates ICT leaders and entrepreneurs.

“The biggest thing is that humanity shapes technology. It’s not created in a vacuum.

“We talk about ethics and at a big picture level it’s about values and the roles we play as individuals and institutions to be able to harness this technology,” Hutchinson said.

Knight echoed this sentiment, noting that consumers had the power to bring about change through their wallets and only then would we start to see an impact globally.