RMIT ABC Fact Check investigates whether it's illegal under the constitution for a state to close its borders in the effort to halt the spread of COVID-19. 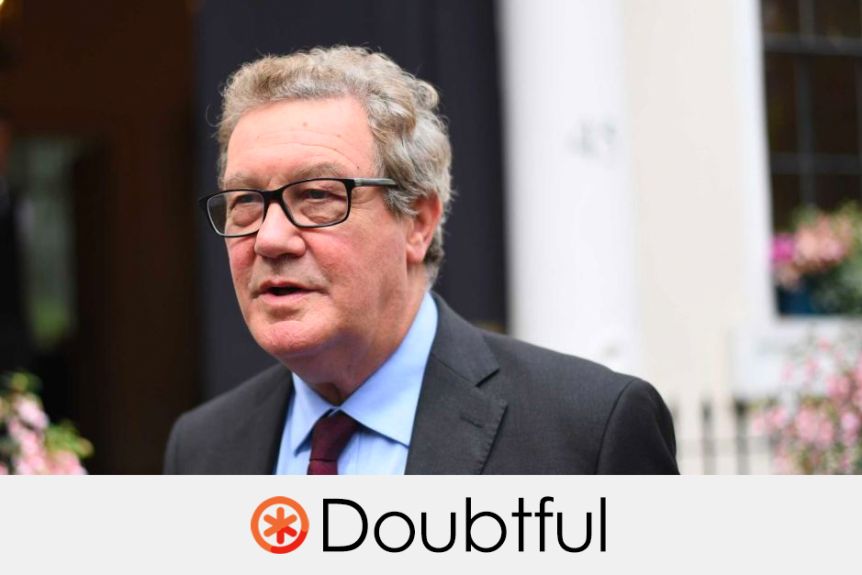 Efforts to halt the spread of COVID-19 have led to a range of restrictions at some interstate and territory borders.

When Queensland closed its borders on April 3, former foreign minister and high commissioner to the United Kingdom Alexander Downer took to Twitter, questioning the constitutional validity of the move: "I don't think an Australian state can legally close its borders to other Australians under section 117 of the constitution."

The constitution does include some sections that prohibit a state discriminating against Australian citizens who are residents of other states.

However, constitutional experts contacted by Fact Check said it has long been accepted by the courts that there can be valid exceptions to these prohibitions, where it is necessary to protect the people of a state from the risk of injury from inbound goods, animals, and people.

They said the deadly coronavirus was likely to fall under such an exception as long as the restrictions imposed by a state are limited to the life of the emergency, tailored to protecting public health and do not single out people's interstate status without good reason.

Border restrictions around the country

The states and territories have taken different approaches to who can enter their borders as a result of the coronavirus pandemic, resulting in some significant variations across the country.

For example, financial penalties for non-compliance with travel rules and restrictions vary from $13,335 in Queensland to a maximum of $62,800 in the Northern Territory, where incoming people are required to record details of where they are staying.

In Queensland only residents, residents of border communities undertaking essential activities and those considered an "exempt person" can cross the state's border.

NSW, Victoria and the ACT remain open for now, although all non-essential travel is strongly discouraged and as in all states, travellers from overseas are required to complete a 14-day quarantine in a hotel at the port they enter.

South Australia has imposed forced quarantine for those crossing its borders but is allowing people who live in communities bordering the state to come and go in the ordinary course of their work, education or daily life.

In contrast, under Western Australia's tough restrictions announced the day before Mr Downer's tweet, travellers are barred unless providing essential services under the state's Quarantine (Closing the Border) Directions.

Tasmania was the first state to announce border restrictions on March 19, but residents and essential workers are allowed aboard the Spirit of Tasmania ferry.

Self-isolation periods of 14 days are common across the states with border restrictions, but some are imposing measures that others do not.

For example, anyone entering Queensland, including returning residents, requires an entry pass.

In Western Australia, everyone seeking an exemption to its self-isolation rule must make a formal application.

What does section 117 have to do with it?

In his tweet, Mr Downer referred to section 117 of the constitution, which deals with discriminating against non-residents of a state.

According to a 2016 report by the Australian Law Reform Commission, section 117 "which provides protection against discrimination on the basis of state of residence, may also protect freedom of movement within Australia".

Anne Twomey, a professor of constitutional law at the University of Sydney, told Fact Check section 117 "is not absolute in its application".

This means there are certain activities, such as voting in state elections, which are appropriately confined to state residents.

"Most importantly, section 117 does not affect state laws that are reasonably necessary for the safety of the state or its people," Professor Twomey said.

"States can, for example, make laws that would prevent unqualified or incompetent interstate medical practitioners from practising in the state.

"They could, accordingly, also discriminate against residents of other states if it were for the purpose of protecting the people of the state from a deadly communicable disease, as long as the law was reasonably appropriate and adapted to protecting public health and was not simply for the purposes of discrimination."

What else does the constitution say on border closure?

Constitutional law experts contacted by Fact Check said that while section 117 is relevant to the legality of state border closures, section 92 of the constitution is the more applicable provision.

Section 92 says that "trade, commerce, and intercourse among the states, whether by means of internal carriage or ocean navigation, shall be absolutely free."

George Williams from the University of NSW told Fact Check the key word is "intercourse", which refers to movement and travel.

In effect, it guarantees free movement throughout the federation.

"This, though, is subject to exception, including reasonable measures to deal with a public health emergency," Professor Williams said.

"It is hard to see that the current circumstances would fail to qualify, unless it can be shown that closing state borders is in some way disproportionate to the health threat or has been imposed arbitrarily."

James Stellios from ANU College of Law told Fact Check that despite section 92's term of "absolute freedom", the High Court has recognised that the protection is not absolute, and that states can impose certain limits for certain purposes.

The number of new cases in Western Australia continues to be very encouraging, and shows that the measures we have taken so far are starting to have a positive impact.

But we cannot afford to take our foot off the pedal. pic.twitter.com/85HINf8a75

Professor Stellios said it's likely that preventing the spread of COVID-19 would count as a legitimate reason "for regulating the free movement of people and, depending on the science of how it spreads, perhaps interstate trade and commerce".

However, he cautioned that states can only take measures that are reasonably necessary to achieve that objective.

"The fact that the states are taking different measures might create some difficulties for the states that take more stringent approaches.

From midnight tonight, if you are not a Queensland resident or have your border pass to be considered exempt from restrictions, you will not be able to enter our state. #coronavirusaustralia pic.twitter.com/Bv1WeK3l4Q

Cheryl Saunders from the University of Melbourne Law School said neither section 117 nor section 92 "contains an absolute prohibition" on state border closures.

"Both are read by reference to purpose," Professor Saunders said.

"They have never been tested in circumstances like the present, obviously, but as long as the restrictions are limited to the life of the emergency, tailored to protecting public health, and do not single out interstateness without good reason, I would expect them to be able to operate consistently with the constitution."

Have borders been closed before?

State border closures might seem dramatic, but they have happened before in response to a deadly virus.

Medical historian in the Department of History at the University of Sydney Peter Hobbins told Fact Check that during the global Spanish flu pandemic in 1918-1919 there was considerable debate and dissention over state border closures.

In November 1918 the Commonwealth and states had agreed that while the Commonwealth managed maritime quarantine to keep pneumonic influenza out, internal borders would only be closed after joint consultation. That agreement broke down almost immediately after the first cases arrived in NSW from Victoria in late January 1919.

This prompted the Victorian government to admit that they had cases themselves, leading NSW to unilaterally close the border. A series of other border closures followed, "at which point the Commonwealth threw up their hands and left the states to squabble among themselves," Dr Hobbins said.

In 2018, Dr Hobbins ran a series of community history workshops on the 1919 pandemic around NSW, including the border towns of Tenterfield and Albury. He said both communities had similar stories to tell about how they had suddenly become home to hundreds of out-of-state citizens who were locked out of returning home. 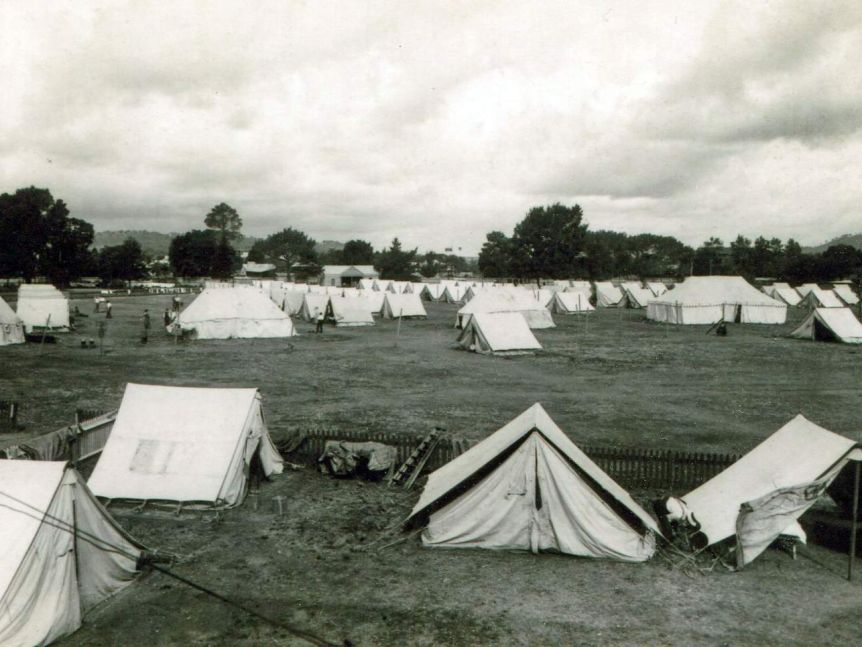 Quarantine camps were set up in border towns during the Spanish flu pandemic. (Supplied By The Albury And District Historical Society)

"Initially there was some leeway — usually for residents who lived 10 miles either side of the border — but the restrictions soon became stronger," Dr Hobbins said.

"The result was that for the first few weeks of February 1919, these unfortunate souls were held without facilities or compensation in border towns, and had to fall on the charity of locals. Gradually, more formal quarantine stations were set up, usually comprising tents in the local showground, where those wishing to cross the border had to wait out four to seven days to confirm that they were free of influenza. I believe that they were expected to pay back 3 shillings per day to the state government for the privilege of being quarantined, though few did and even fewer were pursued for their arrears," he said.

The historical society in the NSW South Coast town of Moruya recently revisited the controversy, recording that The Moruya Examiner carried "latest telegrams" from its Sydney correspondent on February 1, 1919 that said: "The Victorian and Federal governments are strongly protesting at the action of the New South Wales government in closing the border to traffic. They claim it is a violation of the agreement made in November."

The newspaper also noted that Commonwealth maritime quarantine restrictions applied to those who did manage to return to their home state from NSW by sea: "Hundreds of Queenslanders marooned on the Tweed River are prohibited from returning to Queensland and must come to Sydney, thence by steamer to Brisbane, where they will be seven days in quarantine."

RMIT FactLab has partnered with Meta, the parent company of Facebook and Instagram, to fight the spread of misinformation through independent third-party fact-checking.