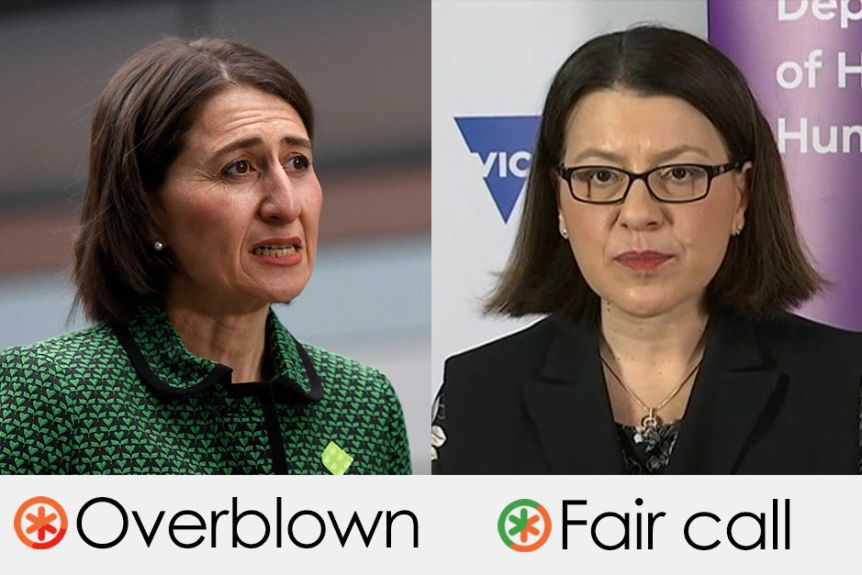 It was every state for itself as Australia's state governments bickered over coronavirus border restrictions.

Then, competition emerged over who was doing a better job of catching the virus in the community.

In a media conference on May 14, 2020, NSW Premier Gladys Berejiklian said she was aware of international reports that "NSW has the highest rate of testing in the world".

On May 21, the state's Health Minister, Jenny Mikakos, tweeted Victoria had "the highest per capita testing rate in Australia''.

Thank you to all the Victorians who continue to get tested for #COVID19 in huge numbers. We have the highest per capita testing rate in Australia. By actively looking for positive cases we’re able to find them, isolate them & respond quickly & keep Victorians safe #springst pic.twitter.com/zsJzhOMpVj

This was "one of the highest" rates in the world, she continued, adding a chart that suggested Victoria was second only to Iceland.

Did NSW lead the world with its testing rate, and was Victoria's rate among the highest? RMIT ABC Fact Check investigates.

When the NSW premier made her claim (May 14), NSW ranked 22nd in the world for its cumulative testing rate, and 20th for its daily rate.

Victoria, meanwhile, was at 18th place in cumulative terms and had cracked the top three for daily tests.

Were both reporting the same thing, they may have placed roughly equal in cumulative terms. 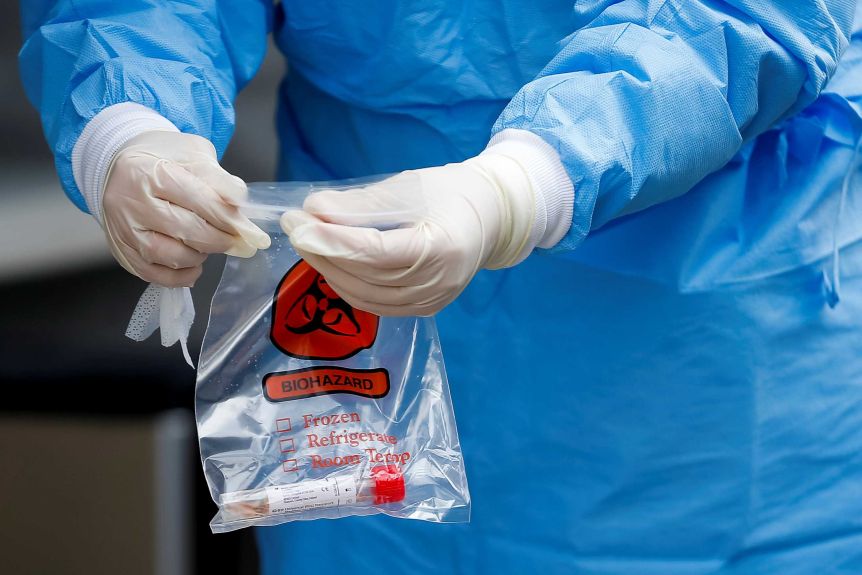 Are NSW or Victoria world-beaters in terms of coronavirus testing? (Reuters: Lindsey Wasson)

In daily terms, though, Victoria had already doubled NSW's test rate. It was soon leading the nation on both measures.

By the time Ms Mikakos made her claim (May 21), Victoria's total tests per thousand people was the 13th highest globally.

Though not quite the second place her tweet implied, this rate was certainly among the world's highest.

Victoria's rate for daily tests was fourth highest, behind Bahrain, the United Arab Emirates and Lithuania.

But such comparisons come with serious caveats. Not all countries count the same things or report as regularly, and it cannot be guaranteed that different test types have been excluded.

Moreover, data is not available for every country.

What type of testing?

Ms Mikakos said Victoria's testing was about "seeing the extent of the virus's transmission in the community".

Broadly, there are two types of testing for SARS-CoV-2, the virus behind COVID-19.

Serology tests can show whether someone has been exposed to the virus based on the presence of antibodies in their blood following an immune response.

But as the World Health Organisation explains, these tests are often possible only after a patient has recovered.

Fact Check has assessed the claims on the basis of so-called PCR tests, which look for the presence of the virus's genetic material in a nasal or throat swab.

These are the most commonly used viral tests for coronavirus in Australia, and according to the national COVID-19 health guidelines (as they stood on May 22), are used to confirm new cases. 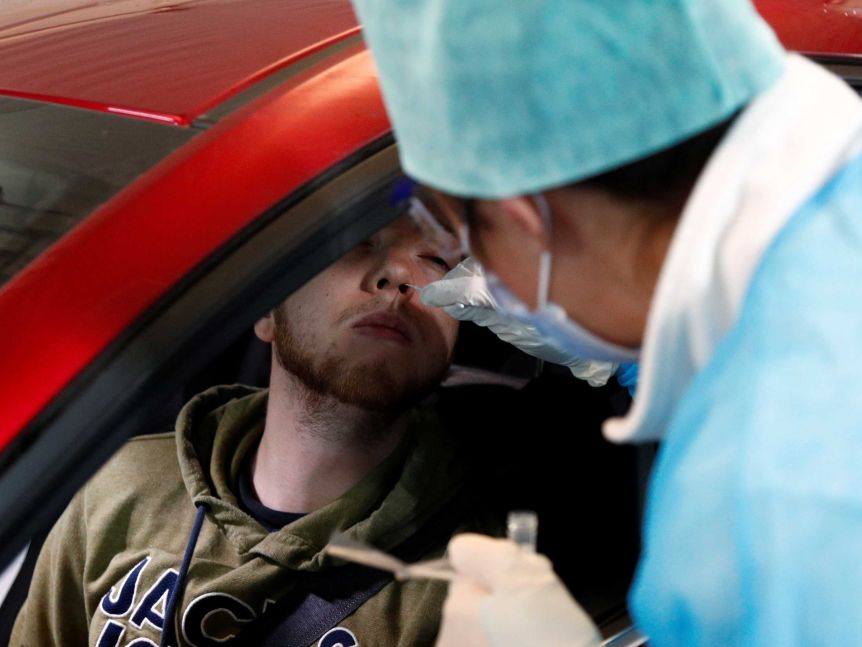 PCR tests pick up the presence of COVID-19 genetic material on a throat or nasal swab. (Reuters: Francois Lenoir)

Neither Ms Berejiklian nor Ms Mikakos specified whether they were referring to tests per day or cumulative tests to date.

Fact Check has assessed their claims on both measures.

John Carlin, a professor of biostatistics at the University of Melbourne, told Fact Check that daily rates were "the only way in which we can keep a handle on the intensity of effort that's going into monitoring the current rate of spread of the disease".

He said cumulative rates showed the effort countries had put in over the longer term, "but this will have been spread in very different ways over time".

Cumulative rates helped avoid short-term data fluctuations, she said, adding that while these rates would ideally be standardised to a common starting point (such as days since each country's 100th case), the differences from not doing so diminished as the pandemic went on.

Ramon Shaban, University of Sydney's clinical chair of infection prevention and disease control, said the important thing was to have "a continuing high rate of testing that goes on in jurisdictions over time", and it was this, combined with falling community transmission, that showed whether a country was actively looking for cases.

Both claimants compared their rates of "testing" to those of other countries. However, not all countries count the same thing.

Some report the number of tests conducted, others the number of people tested. It is often not clear which method they are using.

Since people can be tested more than once but must have had at least one test to be counted, Fact Check considers the number of people tested to reflect a jurisdiction's minimum possible test rate.

In Australia, where hospitalised coronavirus patients must meet certain conditions including the return of two negative tests before being released from isolation, states report the number of tests conducted.

The state switched to counting tests on May 26, but unlike the other states and territories its counts still exclude follow-up tests for confirmed cases.

To compare Australia's states, Fact Check has used test counts from the Federal Government's weekly reports and daily snapshots. (Fact Check's daily counts for May 14 and May 21 reflect seven-day averages.)

The federal test numbers generally match those publicly announced by the Victorian and NSW health departments.

Ms Mikakos claimed on May 21 that Victoria had among the world's highest test rates.

The numbers show South Australia led the nation in cumulative testing per capita until the week of May 10, with NSW just behind.

Then, Victoria leapt ahead — overtaking NSW on May 12, then South Australia on May 14.

Ms Berejiklian made her claim on May 14.

In a statement issued that same day, NSW Health announced the state had "one of the highest testing rates in the world".

However, the numbers show both Victoria and South Australia already had higher cumulative rates than NSW. Importantly, NSW was at that stage still counting the number of people tested, not the number of tests.

When it switched to counting tests on May 26, its total rate jumped by 8 per cent — well above the previous week's 2 per cent daily average increase.

Had the switch happened earlier, a similar boost on May 14 would have put NSW roughly level with Victoria at the top for cumulative tests.

However, it would have done little to dent Victoria's lead in the daily stakes, with the southern state already conducting, on average, twice as many daily tests per person as NSW.

Who has the world's highest test rate is a vexed question.

There is no standardised reporting of COVID-19 test data, nor are numbers published by intergovernmental bodies such as the World Health Organisation.

In the absence of such a dataset, experts directed Fact Check to the websites Worldometer and Our World in Data.

Cited in Ms Mikakos's tweet, Our World in Data is run by Oxford University researchers and collates test figures from official government sources.

Detailed information on these sources makes clear that countries report their data inconsistently, and there is often limited information about what is being counted.

Illustrating the problem, the British Government has been accused of including tests "posted out" in its count.

Our World in Data does not cover every country and is generally limited to PCR tests, though excluding other test types is not always possible.

Fact Check has based its assessment of the claims of Ms Berejiklian and Ms Mikakos primarily on the website's total rates and seven-day average test rates.

Where rates are marked as relating to "samples tested" or "swabs tested", Fact Check takes them to mean tests that have been conducted.

Worldometer publishes COVID-19 test data for more than 100 jurisdictions not covered by Our World in Data, including many smaller territories (for example, Gibraltar, the Falkland Islands and the Isle of Man).

It compiles its numbers from both official and unofficial sources, and does not specify what is counted.

Fact Check has added four countries to the list compiled by Our World in Data using figures from official sources. These countries are Brunei, Cyprus, Kuwait and the United Arab Emirates (UAE).

Each has populations larger than 100,000 people and were reported as having conducted more than 40 tests per thousand people, according to a Worldometer snapshot that used estimates up to May 21.

Two other countries also met this criteria (Mauritius and Malta), but Fact Check was unable to find official test counts for them.

Rates have been calculated using UN population estimates, which are also used by Our World in Data.

Australian states versus the world

Ms Berejiklian suggested NSW was leading the world in her May 14 comments.

But its cumulative rate of 41.1 tests per thousand people didn't crack the top 20.

Ms Mikakos's tweet from that time showed only Iceland ahead of Victoria.

In fact, 12 countries outranked Victoria, and rates for several of them were based on days-old data.

Five of those countries counted the number of people tested; or, it was not clear what was counted.

When Ms Berejiklian made her claim, Victoria had already blazed ahead of NSW with its daily test rate.

Based on averages for the week to May 14, Victoria was conducting 2.4 tests per day per thousand people. That was the third-highest rate globally, behind only by Bahrain (3.8) and the UAE (3.6).