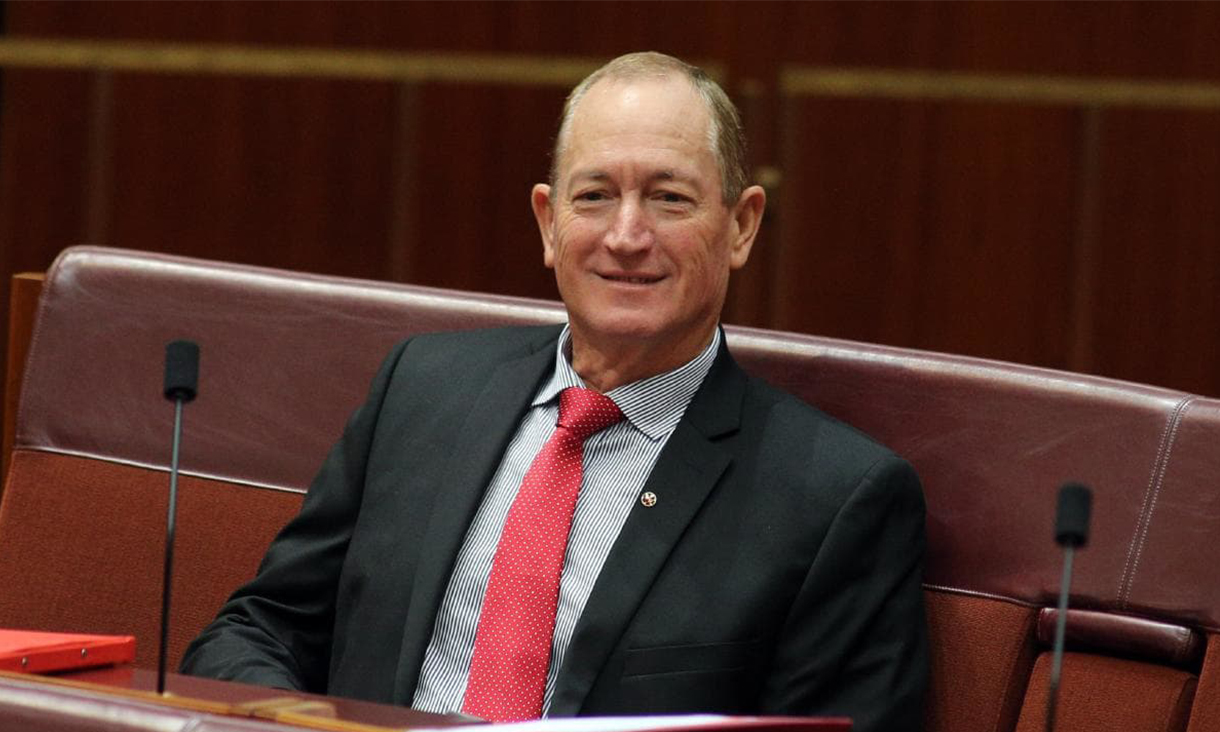 Katter's Australian Party senator Fraser Anning says that international student visas should be "drastically reduced", which he says will open up more places for Australian students.

Katter's Australian Party senator Fraser Anning sees migration as a "critical problem" facing the nation, and among the solutions proposed in his controversial first speech to Parliament was a big reduction in student visas to create more places for domestic students.

"This will create more university places for Australians, whose parents have actually paid for the universities with their taxes in the first place."

The claim was promptly rebuffed by the Government. Alan Tudge, then minister for citizenship and multicultural affairs, said Senator Anning's suggestion that international students take university places from Australians was "just factually wrong".

"If anything they subsidise Australian students," Mr Tudge said.

There is no trade-off between domestic and international university places.

The number of university places available to Australian students is largely determined by the level of Commonwealth funding provided.

International students pay full fees (as do a relatively small number of Australian students) and their numbers are set by the universities.

They do not take places away from subsidised Australian students.

In recent years, universities have dramatically scaled up their facilities to capitalise on significant growth in both international and domestic demand for university places.

As experts contacted by Fact Check noted, this process has been significantly funded by full-fee-paying international students, boosting the number of places and facilities available to Australian students.

Historically universities were funded using a "supply-driven" model, where the government allocated funding on the basis of a fixed number of Commonwealth-funded places.

The December 2008 "Bradley Review", headed by higher education expert Professor Denise Bradley from the University of South Australia, warned Australia was falling behind in performance and investment in higher education, with the supply of subsidised higher education places failing to keep pace with demand.

Following the review, the former Labor government announced that from 2012 universities would be able to enrol an unlimited number of students undertaking bachelor degrees, with public funding allocated accordingly.

The decision to introduce a "demand-driven" funding model led to a surge in student numbers, and consequently to a sharp increase in the public cost of higher education.

Department of Education and Training data shows the number of domestic students starting undergraduate courses increased by 51 per cent over the nine years to 2016, from 186,658 to 281,184.

This increase, and the associated cost to the budget, prompted the Coalition Government to announce in the December 2017 Mid-Year Fiscal and Economic Outlook a freeze on the main funding mechanism for public universities, known as the Commonwealth Grant Scheme.

Under the freeze, funding from January 1, 2018 was set at 2017 levels until 2020, with funding from 2020 to increase in line with population growth, provided certain performance standards are met.

Commonwealth funding is also provided through the Higher Education Loan Program, scholarships for Aboriginal and Torres Strait Islander students and assistance to students with disabilities and students from low socio-economic backgrounds.

Course fees for Commonwealth Supported Places are capped: the Government determines the subsidy and sets the maximum amount that universities can charge for the student contribution.

Students can borrow their share of the fees from the Government.

In June 2017 Fact Check examined a claim by Treasurer Scott Morrison that taxpayers "subsidise more than half the cost of each student's higher education". That claim was found to be incorrect.

Most postgraduate courses require full fee payment by students, although some Commonwealth supported places are offered.

How domestic student numbers are determined

Federal funding is provided to universities through a range a mechanisms. The largest is the Commonwealth Grant Scheme, under which the Government pays the universities a portion of the course fees for students enrolled in Commonwealth supported places.

The scheme is the key determinant of domestic student numbers. It is administered under the Higher Education Support Act, 2003.

The act makes it clear that the per student grant (which is paid to eligible universities) can only be provided for Australian citizens, New Zealand citizens resident within Australia, or permanent visa holders.

The Federal Government describes the scheme in the following terms:

"The Australian Government subsidises a CSP (Commonwealth Supported Place) by paying part of the fees for the place directly to the university. The subsidy amount is not a loan and students do not have to pay the subsidy amount back.

"However, students are also required to contribute towards their study and they pay the remainder of the fee known as the 'student contribution amount' for each unit they are enrolled in. Universities set their own student contribution amounts (within limits set by the Australian Government).
"CSPs are only available to domestic students and most undergraduate students studying at university are enrolled in a CSP.

"There is no cap to the amount of study a student can undertake in a CSP. A student enrolled in a CSP is referred to as a Commonwealth supported student."

When the Government announced the funding freeze in December 2017, Education Minister Simon Birmingham said in a media release: "The Government is not capping student places and will continue to fund all student contributions via the Higher Education Loan Program (HELP) according to university enrolment decisions, in addition to the maximum CGS payment."

Senator Birmingham said it was clear that universities had benefitted from economies of scale under the demand driven system with teaching costs having grown more slowly than revenue.

"Should universities wish, they can use these efficiencies to continue to grow their enrolments," he said.

How international student numbers are determined

It pointed out public universities were able to enrol "unlimited numbers of international and postgraduate full‑fee students", with no restrictions on maximum fees.

The Grattan Institute's Mr Norton told Fact Check the Government's December 2017 decision to cap funding for Commonwealth places for two years at 2017 levels had not led to any "crowding out" of domestic students by international students because the number of domestic students was determined by federal funding levels.

"There is now no financial incentive to expand domestic undergraduate enrolments, but that is not crowding out by international students," Mr Norton said.

"The same logic applies whether there are international enrolments or not. It does create a slightly odd situation where universities can expand to meet demand from China but not from Australia. But the solution is to restore demand driven funding for domestics."

A November 2015 report by Mr Norton found Commonwealth Supported Places make up more than 60 per cent of enrolments at Australian universities. With the exception of medicine, there are no limits on Commonwealth-supported bachelor degree student numbers.

The report found international students, who usually generate more revenue per student than domestic students, contribute a substantial proportion of surpluses from teaching earned by universities.

What the experts say

Experts contacted by Fact Check were unanimous: there is no trade-off between the number of international students and domestic students.

Denise Bradley, who lead the landmark 2008 review, told Fact Check local student numbers had been controlled since the demise of demand-driven funding by restrictions on government funding.

Gwilym Croucher, Senior Lecturer from the University of Melbourne's Centre for the Study of Higher Education, said universities had been enrolling international students in Australia "for decades now" and did not have an absolute limit on the number of students.

"Limits on the number of students that a university can educate ultimately comes from their available resources," Dr Croucher said.

"International student enrolments have helped grow the scale of Australian higher education over the last few decades, so if anything they have helped make more places available for domestic students."

Mr Norton said virtually all students with a "half decent" ATAR, or Australian Tertiary Admission Rank, were offered a place.

"Universities that are strong in international students, they have had a hugely profitable market, and as a result they are permanent construction sites," Mr Norton said.

"I would say the facilities at these universities are much better than they would have been had it not been for international students."