Good access to community services is a key element of livability, and according to new research, regional cities are only receiving one-third of them. Experts from the Australian Urban Observatory explain.

The way our growing cities are planned and built is becoming ever more important in building healthy, liveable and sustainable communities. Much of the focus on liveability has been on Australia’s biggest capital cities, Sydney and Melbourne, which will become megacities of more than 10 million people by 2050. Regional cities are often missing from these conversations, but will be critical for future liveability and sustainable urban development across Australia.

In research for the newly launched Australian Urban Observatory we found people living in urban neighbourhoods of regional cities have satisfactory access to only 31% (five of 16) of essential community services on average. Capital city neighbourhoods have access to 40% on average. This means residents of many parts of both regional and capital cities need more accessible services.

These findings are drawn from Liveability Report scorecards for eight capitals and 13 regional cities, which are now available online.

Good access to community services is a key element of liveability.

We developed the Australian Urban Observatory to make understanding and measuring liveability easier. It’s an online digital platform providing liveability indicators across the nation’s 21 largest cities. (The smallest of these has 80,000 residents.) Together, these cities are home to nearly 20 million people.

The eight capital cities have 67% of Australia’s population. The remaining 13 cities are home to about 13% of Australians.

Many of these regional cities are predicted to grow substantially over the next 30 years. Some are already among our fastest-growing urban areas. These regional cities are Albury-Wodonga, Newcastle-Maitland, Wollongong, Cairns, Gold Coast-Tweed Heads, Mackay, Sunshine Coast, Toowoomba, Townsville, Ballarat, Bendigo, Geelong and Launceston.

We mapped liveability indicators across the 21 cities at various scales: local government (council) areas, suburbs, and neighbourhoods (ABS Statistical Area 1). This mapping shows all cities have areas where liveability could be improved. And we know inequity in liveability is related to inequity in health.

How is liveability assessed?

The Liveability Index for each area is based on an evaluation of its performance relative to all other areas at this scale. Areas performing well on all 13 indicators score higher than 100. Areas scoring lower than 100 are below average for a city.

The Australian Urban Observatory shows how liveability and access to the amenities we need in our daily lives vary across neighbourhoods and suburbs. It enables us to identify relative liveability strengths and weaknesses of areas. Using other indicators to understand these patterns helps to explain area-based scores.

Selecting an area can help to understand what a liveability rating actually means both in absolute terms and relative to other areas of the city.

For example, neighbourhood-level ratings in the map below reveal liveability is lower in many outer growth areas of Geelong. It is relatively good in more established neighbourhoods. 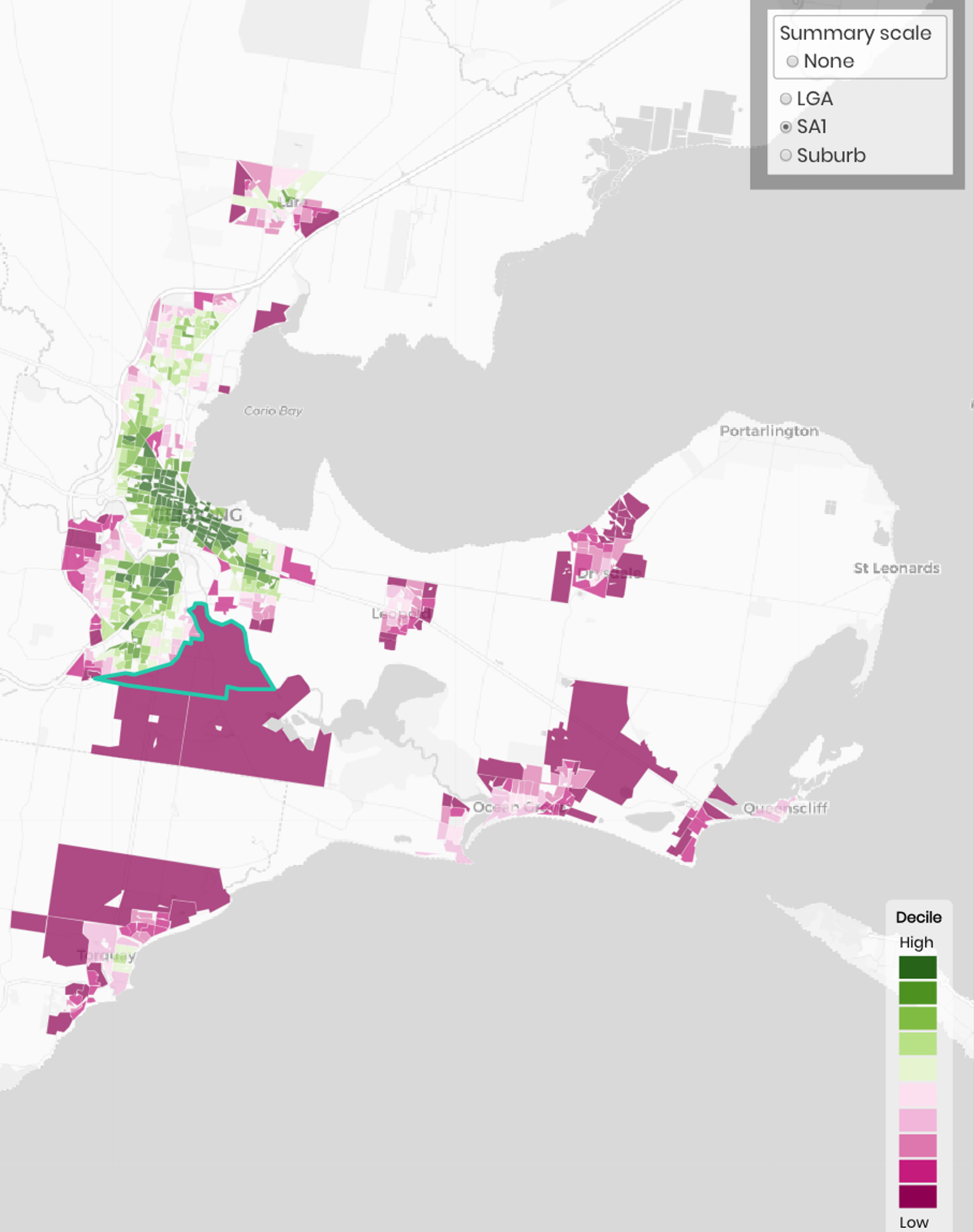 Liveability is lower in many outer growth areas of Geelong and very good in more established neighbourhoods. Australian Urban Observatory

This is a common pattern in Australian cities. It is likely to get worse if city planning continues to allow sprawling low-density urban development that doesn’t deliver local services as new housing is built.

A closer look at social infrastructure

Our indicator of social infrastructure provides a good example of liveability differences within cities. This index measures residents’ access to 16 different types of essential community services within reasonable distances. Having to travel further than these distances has significant impacts on our health and well-being.

Social infrastructure describes the common services and facilities people need over their lifetimes. We have previously shown the growth areas of Melbourne lack these services despite their importance for health and well-being.

The chart below shows the overall Social Infrastructure Index for each regional city. 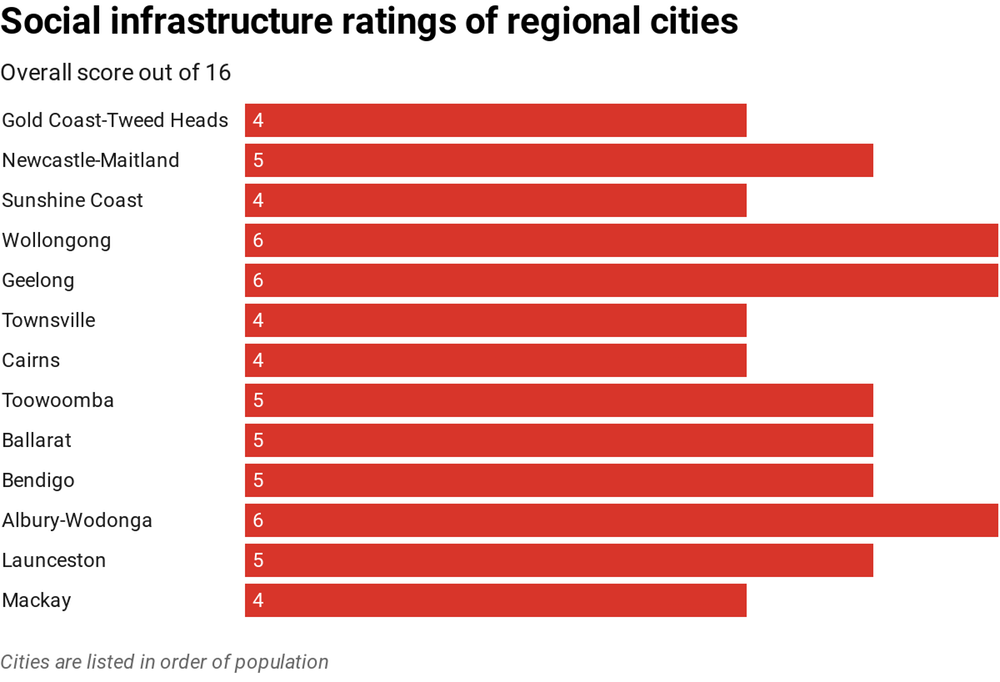 Not surprisingly, Sydney and Melbourne have the best results. City-wide averages for these cities show residents have access to seven different types of services. Geelong, Albury-Wodonga and Wollongong perform as well as many capital cities and actually outperform Canberra, Darwin, Hobart and Perth on this measure.

City-level averages and national comparisons are of limited use for improving liveability across Australian cities. We need to focus on within-city differences to drive action on inequities between neighbourhoods and to provide evidence to support more effective policy, planning and delivery.

For instance, the map below shows neighbourhood-level social infrastructure access across Albury-Wodonga. Access in central and established areas is very good, but poorer in outer areas. Liveability here is compromised as residents depend on cars to get to everyday services. 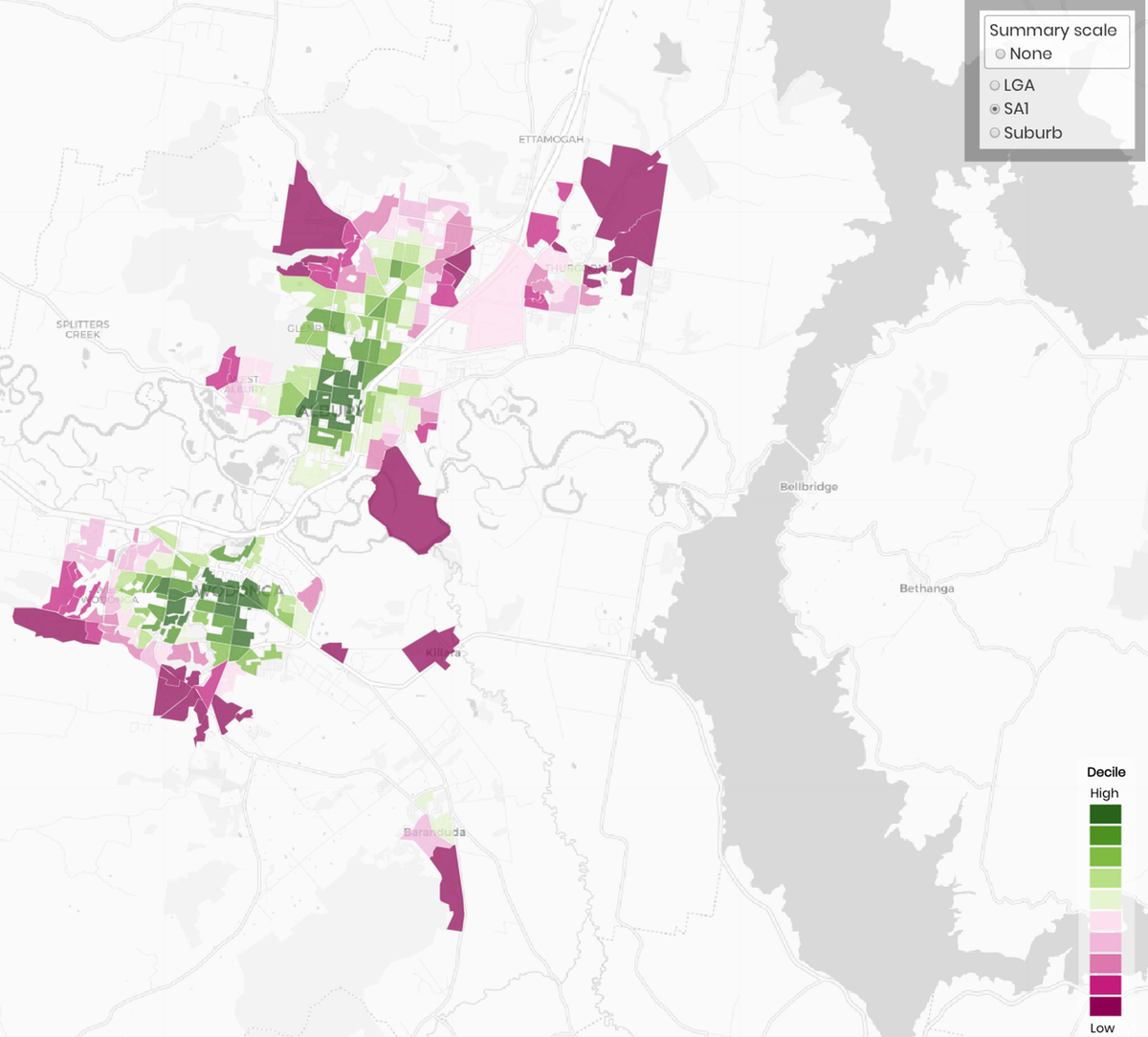 The Social Infrastructure Index shows access to essential community services is very good in central and established areas of both Albury and Wodonga, but poorer in outer areas. Australian Urban Observatory

This pattern is becoming very common across our cities. It’s having long-term impacts on people’s health. This means ineffective city planning will have a long-term affect on health budgets across all levels of government.

Neighbourhood-level results presented in the Australian Urban Observatory clearly identify where policy and planning action should begin to reduce the inequities across our cities. These results show why we need to include regional cities in discussions about the future liveability and sustainability of our country.

We gratefully acknowledge the contributions of Rebecca Roberts, Katherine Murray and Fadhillah Norzahari to this article.

Indicator results for neighbourhoods and suburbs across the 21 largest cities are freely available in the Australian Urban Observatory. Liveability Report scorecards for each city are available here.

Dr Melanie Davern is a Senior Research Fellow and CoDirector of the Healthy Liveable Cities Group with the Centre for Urban Research at RMIT University. Her research interests focus on liveability, community and individual wellbeing

Dr Lucy Gunn has 20 years of experience in research and teaching in the fields of econometrics and urban research. Her key interest is in understanding which urban environments are supportive of health and wellbeing outcomes.

Alan Both's research develops new algorithms and systems for computing with spatial data in the cloud. Both works with all types of dynamic spatial data, from LiDAR data about our changing world to data about every type of moving object, from cars to fish

Carl Higgs is a data analyst in the Healthy Liveable Cities group of the Centre for Urban Research at RMIT. Higgs has experience in research relating to population health and spatial analysis.

Good access to community services is a key element of livability, and according to new research, regional cities are only receiving one-third of them. Experts from the Australian Urban Observatory explain.

Victoria is home to Australia's most liveable regional cities – Ballarat, Bendigo and Geelong – according to new research that for the first time maps health and liveability across the country’s 21 largest cities.

As our cities evolve, so too should our approach to building and planning our urban habitats. Here, six RMIT urban researchers share how their work is shaping how we live in our cities and with nature.