Flying the Ingenuity helicopter on Mars is the equivalent of flying one at about 100,000 feet on Earth. Tricky, considering the highest helicopter flight ever recorded maxed out at 42,000 feet.

Yesterday at 9pm Australian Eastern standard time, the Ingenuity helicopter — which landed on Mars with the Perseverance rover in February — took off from the Martian surface. More importantly, it hovered for about 30 seconds, three metres above the surface and came right back down again.

It may not sound like a huge feat, but it is. Ingenuity’s flight is the first powered flight of an aircraft on another planet. It marks a milestone in the story of human space exploration.

While the Apollo 11 spacecraft famously touched down on the Moon, upon re-launch it simply had to exit the Moon’s gravity and return to Earth. To sustain flight within the environment of a world with no atmosphere, however, is a different story.

The now historic Ingenuity helicopter took six years to make. We can understand why, once we understand the complexities of what was required.

Today I witnessed history. Now you can too. You’re watching video of the #MarsHelicopter’s first flight – a true “Wright brothers” moment.

Why local flight on Mars is a big deal

There are several technological challenges to conducting a helicopter flight on another world. First, and most significantly, helicopters need an atmosphere to fly.

The blades, or “rotors” of a helicopter must spin fast enough to generate a force called “lift”. But lift can only be generated in the presence of some kind of atmosphere. While Mars does have an atmosphere, it’s much, much thinner than Earth’s — about 100 times thinner, in fact.

Testing the craft on Earth required a pressurised room, from which a lot of air would have been extracted to emulate Mars’s atmosphere.

Then there’s the Martian gravity to consider, which is about one-third the strength of gravity on Earth. This actually gives us a slight advantage. If Mars had the same atmosphere as Earth, it’s lesser gravity means we’d be able to lift Ingenuity with less power than would be required here.

But while Mars’s gravity works to our advantage, this is offset by the lack of atmosphere.

Ingenuity’s success marks the first time such a flight has even been attempted outside of Earth. And the reason for this may simply be that, as laid out above, this task is very, very difficult.

There are two main ways Ingenuity was able to overcome the hurdles presented in Mars’s atmosphere. Firstly, to generate lift, the two rotors (made from carbon fibre) had to spin much faster than any helicopters on Earth.

It also has a distinct aircraft-to-wingspan ratio. While Ingenuity’s body is about the size of a tissue box, its blades are 1.2m from tip to tip.

Even transmitting the signal for the flight to begin required an array of advanced technology. Whilst it only requires minutes for radio signals to travel between Earth and Mars, there was still a delay of hours for those signals to reach the helicopter.

This makes sense when you consider the journey those signals have to take – from a computer on Earth, to a satellite dish, to the Mars Reconnaissance Orbiter, to the Perseverance rover and then, finally, to the helicopter. 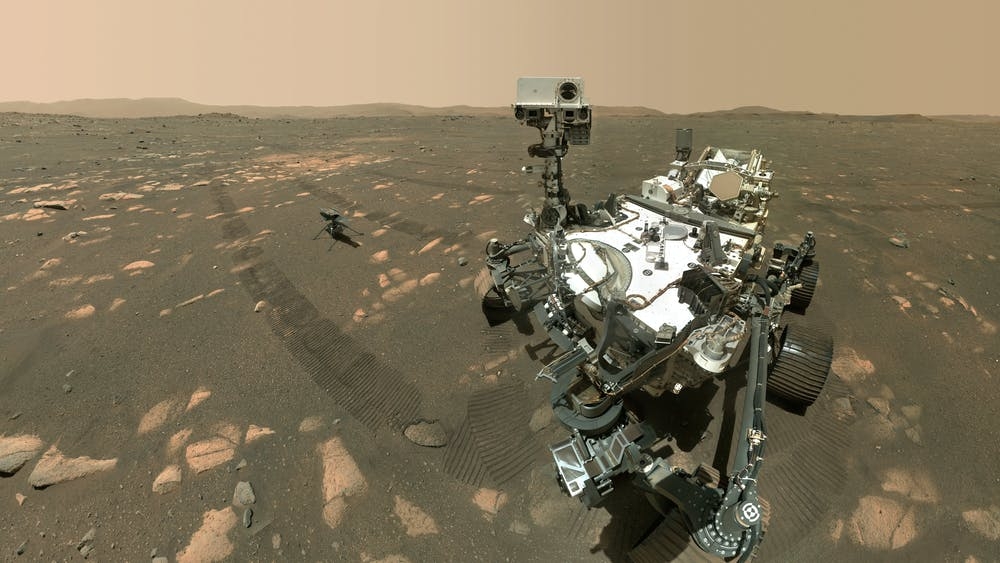 This image shows the Perseverance Mars rover with the Ingenuity helicopter about 4m behind it. NASA/AP

Ingenuity is what we call a “technology demonstrator”. Simply, its only purpose is to prove it can complete a series of simple missions. Over the next few weeks, the helicopter will undertake three or four more flights, the most adventurous of which will involve taking off and travelling about 300m away from Perseverance.

Data retrieved from the flights will be analysed and used as crucial input for future designs of more sophisticated aircraft. Once this technology is applied, its potential will be vast.

Drones and helicopters operating on Mars could act as scouts, checking the land ahead of a rover to confirm whether it’s safe to travel there. Such aircraft could even assist in the search for water and life on the Martian surface.

And in 2035, it’s expected the first humans will land on Mars. There’s a good chance these crews will be trained in operating aircraft locally and in real-time, surveying the land for obstacles and dangerous terrain that could harm humans, or damage suits, aircraft or rovers.

Homage to the past, with the future in sight

As a touching tribute to the first powered flight on Earth, scientists at the NASA Jet Propulsion Laboratory added a historic artefact to the Mars helicopter. Attached to a cable underneath one of its solar panels is a small piece of the wing from the Wright brothers’ 1903 Wright flyer.

This item of flight history is the second piece of an Earth aircraft to go into space; a similar piece of the wing was taken to the Moon during the Apollo missions.

Missions are already in work to push the barriers of powered flight on other worlds. In particular, the Dragonfly helicopter is planned to fly above the surface of Titan, one of Saturn’s moons, with arrival scheduled for 2034.

Maybe it too will take a piece of Earth’s history along for the ride as we continue our exploration of other planetary bodies, one world at a time.

"We've been talking for so long about our Wright brothers moment. And here it is."

Dr Gail Iles is a Senior Lecturer in Physics at RMIT University, and Founder and Program Coordinator of the new BSc Space Science. Iles is a Fellow of the Australian Institute of Physics and the Science Correspondent on the 3AW Neil Mitchell radio show.

How to make roads with recycled waste, and pave the way to a circular economy

Government procurement policies are the key to reducing Australia’s mountain of construction waste.

A new Data Innovation Hub at RMIT will offer students opportunities to work with leading organisations who are using data analytics and AI to solve real world problems and create value for their business.

Railway infrastructure benefits from long-term asset management, including risk and resilience strategic planning, to prepare for the potential challenges posed by future physical and/or cyber-attacks.