A renowned constitutional lawyer and public law expert, Davis is Pro Vice-Chancellor Society, and Balnaves Chair in Constitutional Law, at UNSW Sydney and a Cobble Cobble woman of the Barunggam Nation.

Speaking at RMIT’s annual law and human rights lecture, she explained the long road that has already been taken to get to the threshold of a constitutional change to recognise First Nations’ people.

“There has been support for reform on all sides of politics since the 1999 referendum (on Australia becoming a republic),” she said.

Recognition is one of those complex terms because it can mean many things.

“A lot of the public discourse and debate in the media and by politicians has been about the dictionary definition of recognition: acknowledgement.”

She said First Nations people in Australia, from day one, were seeking substantive, not symbolic recognition.

“It wasn’t until the Uluru Statement from the Heart and Referendum Council process that we got a very clear and unequivocal message from First Nations people that symbolism wasn’t going to cut it,” she said.

“Strong recognition is substantive; it requires a redistribution of public power, and it can compel the state to act.” 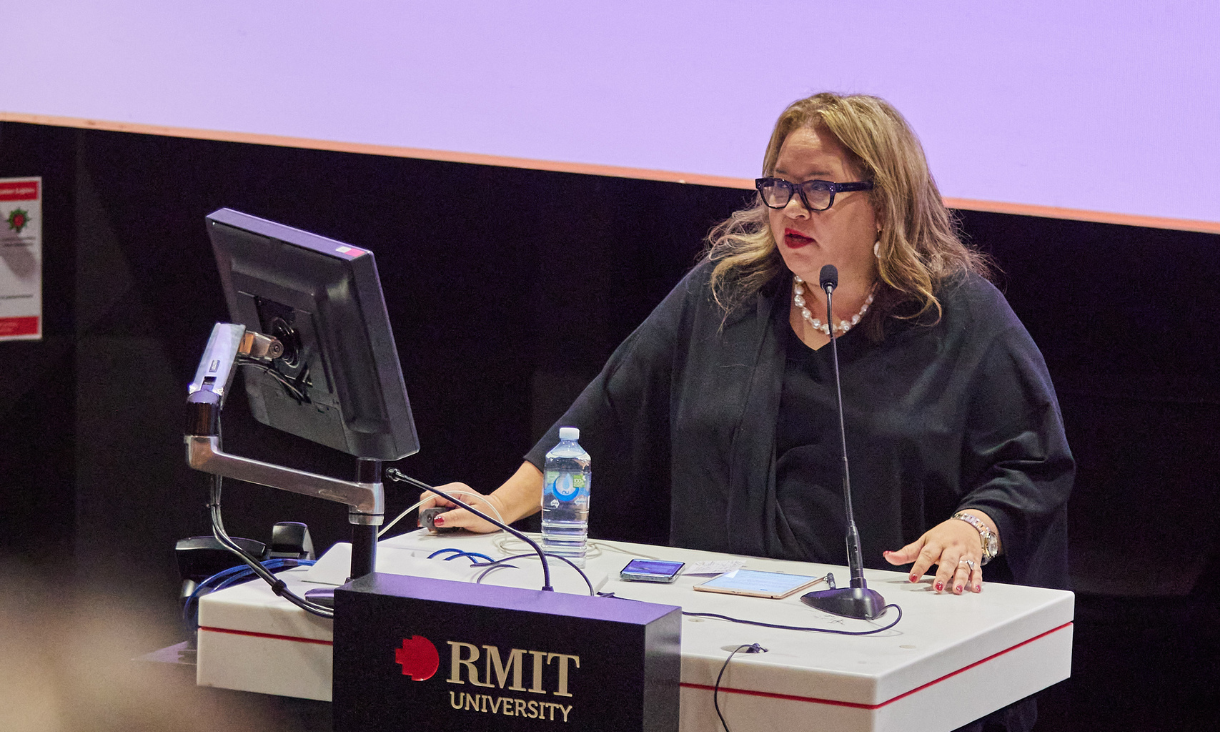 The Uluru Statement from the Heart

Davis shared her experience helping create the Uluru Statement from the Heart in 2017, which set the scene for the upcoming referendum.

The Statement, written by over 250 Aboriginal and Torres Strait Islander Delegates, was a call addressed to the Australian people, inviting them to create a better future for the nation’s First Peoples through key constitutional reforms.

“The Turnbull government set up the Referendum Council. It was tasked with a very unenviable task: going out to communities at a time when they had been really disenfranchised by policies like the Indigenous Advancement Strategy,” Davis said.

“The government was cutting a lot of things that had existed in First Nations’ communities since self-determination. It had a huge impact on people’s thinking. The sense of helplessness was really powerful.”

Davis said that localisation created a more organic process to get to the eventual Uluru Statement from the Heart.

“We wanted to have a sample size and method to create the Statement that was both robust and defensible,” she said.

“A lot of Indigenous communities are regionally distinct. We're linguistically diverse, our ceremony is diverse, and our weather is diverse.”

“Fundamentally anything that happened in this process needed to come from our communities. We had a strong preference for cultural authorities to lead the conversation.”

“Only people without voices were allowed in the meeting. We didn’t want the conversation to be dominated by elites.”

The importance of a Voice to Parliament

Davis also provided an overview of the importance of the impending referendum on the Voice to Parliament, which Prime Minister Anthony Albanese has committed to holding within this term of government.

“A key thing about the Uluru dialogues is that we issued the Statement to the Australian people. The reason is that we were in a period of policy and law reform inertia by the parliament.”

“We didn’t want politicians to come and just take a pretty painting, go back to Canberra, hang it on the wall, and do nothing.”

“We wouldn’t be here if it wasn’t for Australians writing to their MPs. We heard it with teal independents, with some of the most conservative parts of Australia, it was becoming an issue. “

“Australians were talking to politicians right across the country and they made it an election issue.”

She said that the many elders present at Uluru in 2017 have confidence about the success of this proposed change.

“They remember 1967 - the successful referendum to allow First Nations Australians to vote. They said ‘we were the highest yes vote.’ They were not fearful at all about heading down that road.”

Davis surmised that ultimately, it was down to all Australians to make the change for First Nations constitutional recognition.

“It’s the Australian people who can change the constitution, and we need to activate their agency.”

Graduate School of Business and Law Professor Anthony Forsyth thanked Davis for delivering the annual lecture at the faculty’s premier event, now in its tenth year.

“The Higinbotham lecture is one of RMIT’s most prestigious events and celebrates the legacy of Victorian politician and Chief Justice, George Higinbotham, exploring topical legal issues and the interaction between law and society,” he said.

“On behalf of RMIT and the College of Business and Law, I extend my gratitude to Professor Davis, for an engaging and inspirational discussion on one of the most pivotal issues in Australian society today.”

RMIT has taken another step to support even greater relevance and impact beyond academia for the university’s research and innovation activities.