Independent candidate Zoe Daniel’s campaign for the Liberal-held seat of Goldstein on Melbourne’s bayside has benefited from strong Facebook advertising support from Climate 200 and a concerted anti-Liberal Party campaign by GetUp!

Research by RMIT FactLab reveals that Climate 200 has spent up to $499,176 on election ads nationally since December 2021 that support independent candidates who are standing against sitting Liberal candidates.

Thirty-three of these have been placed in support of Ms Daniel’s Goldstein campaign with an estimated minimum spend of $21,300. 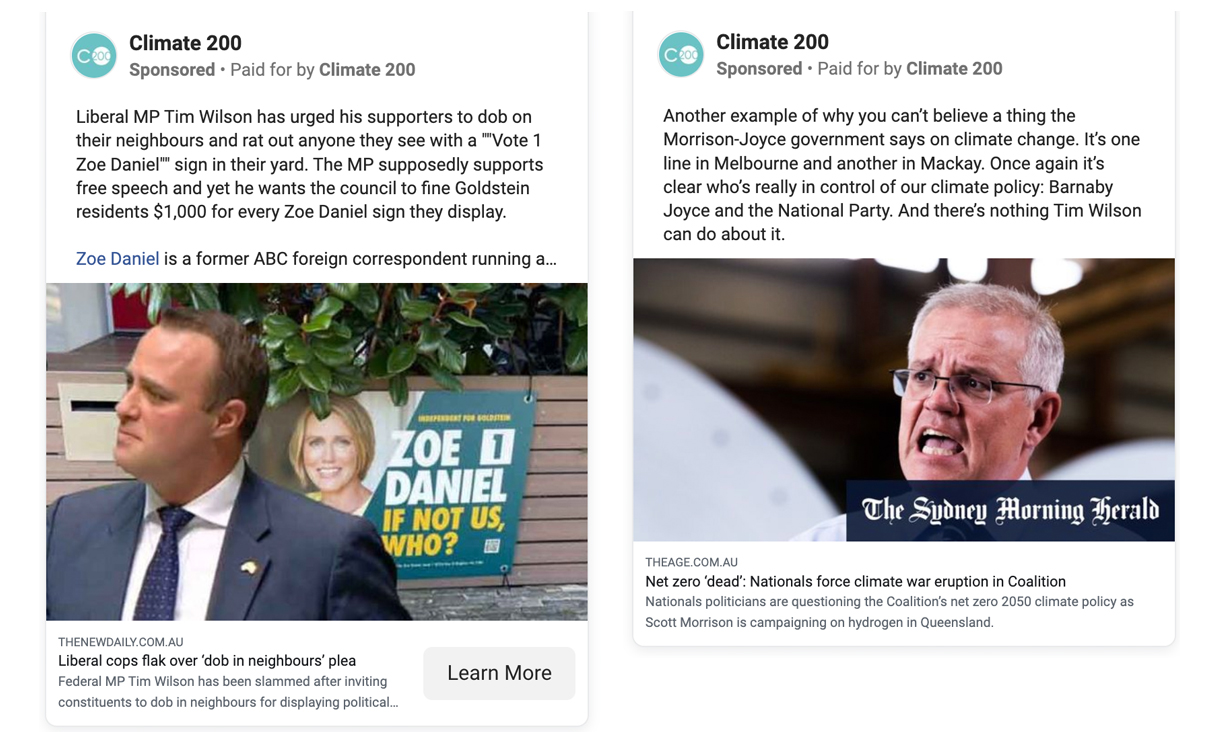 One of the strongest performing Climate 200 ads targeting Mr Wilson has recorded between 35,00 and 40,000 impressions since April 30.

One of the most significant Climate 200 Facebook ads supporting Ms Daniel has recorded between 100,000 and 125,000 impressions.

GetUp! has singled out Goldstein as one of the top priorities of its election campaign in Victoria and has waged a significant anti-Liberal campaign on social media.

According to PoliDashboard’s Facebook Political Ads Module, GetUp! has spent between $83,300 and $112,100 on political and election ads since January 1, which combined have received more than 6.7 million impressions.

FactLab could not find any GetUp! Facebook ads or tweets in direct support of ms Daniel.

Since April 1, GetUp! has made over two dozen tweets criticising Wilson. The majority of these tweets contain the hashtag GoldSteinVotes.

No matter how Liberal MPs like Tim Wilson try to spin it, the Morrison-Barnaby Government is responsible for:
- Investing $10.5B in fossil fuel subsidies
- Cutting clean energy funding by 35%
- Ranking last in the world (UN Report)#AusPol #GoldsteinVotes pic.twitter.com/AzoHJ0QrBT

Recent opinion polls confirm the once-safe Liberal seat of Goldstein held by Mr Wilson is within striking distance of the independent.

Ms Daniel, a so-called ‘teal’ candidate who is standing on climate change issues and greater integrity in politics, is polling 33% of the vote – enough to theoretically win the seat on preferences. She is a former ABC journalist and foreign correspondent.

Goldstein was previously held by former Liberal Party director Andrew Robb, who rose to prominence as trade and investment minister. He approved Shandong Landbridge Group’s lease of the Port of Darwin for 99 years and, after leaving parliament, joined the Chinese company as a consultant.

In defending the seat, Mr Wilson has portrayed Ms Daniel as a “fake independent”. It is the same narrative adopted by Treasurer Josh Frydenberg to defend his seat of Kooyong against independent Dr Monique Ryan.

Mr Wilson has attempted to make political capital from Ms Daniel’s refusal to say which of the major parties she would support in a hung parliament.

Professor Graeme Orr, a specialist in electoral law from the University of Queensland, previously told FactLab that no laws prevent a candidate from running as an independent even if the person once belonged to another political party.

“It’s fairly rare for someone to be so politically minded as to be a serious candidate, yet also be a ‘virgin’ without any prior affiliation with a party or political movement,” Professor Orr said.

“A true independent would be open to either type of government and would be mad to commit prior to any negotiations after an election to maximise the ability to leverage the policies they ran on pork barrel for their electorate,” he added.

Whereas Mr Frydenberg’s anti-independent online campaign has been fought almost exclusively with Liberal Party ads on Facebook and YouTube, Mr Wilson has relied on Twitter and, to a lesser extent, on Facebook to sell the ‘fake’ narrative.

FactLab investigated the impact of Wilson’s anti-independent claims and found that the strategy was not resonating on social media.

An analysis of the Twitter engagement is more critical of Mr Wilson than supportive.

So what is Tim Wilson saying online about independent candidates?

Wilson has made dozens of tweets and Facebook posts about independents and climate action groups, including GetUp!, Climate 200 and Extinction Rebellion.

He has localised the ‘fake independent’ narrative, claiming independents and climate groups are ‘outsiders’ and not representative of the electorate.

After the continued vandalism of our signs and my home, I am happy to report that a resident has provided details of a blue commodore with an identifiable license plate to us. They are now likely to get a “friendly” visit from the @AusFedPolice. pic.twitter.com/s05kP3Rc7g

He has referenced campaign support and donations to Daniel and other independents from climate action groups, such as Climate 200 and GetUp!

Outsiders keep piling into Goldstein to try and change our community. While they’re bringing their Brunswick values to change Bayside, we are taking Bayside’s values to shape the nation: https://t.co/vnqxCw5uy6

Wilson has attempted to cast Daniel’s supporters as anti-Semitic in some posts.

A recent tweet by The Voices of Goldstein, a movement endorsing Daniel, described a photo opportunity of Mr Wilson at the Holocaust museum as “bullshit”.

As a proud Jew how dare @zdaniel ‘s campaign team tell me how I should pay respect to holocaust survivors.

Attacking Jews on how they express their faith is blatant anti-semitism.

These so called Independents are not fit to represent our community. #auspol pic.twitter.com/kVlw47Y6Bf

The tweet was also shared by Liberal MP for NSW Hollie Hughes alongside the caption:

Why are these teal “fake”independents so anti-Semitic? Was it part of their Climate 200 interview? Goldstein, Kooyong and Wentworth… No policies but plenty of bile. https://t.co/D1lVyZTvzm

“Antisemitism is not and will never be acceptable in our community.

“Having already had to apologise for anti-Semitic comments and calling Israel an apartheid state - this is yet another worrying revelation from Zoe Daniel's team.”

The post has received over 250 likes, 76 comments, and 16 shares at the time of writing.

In response, Ms Daniel took to Twitter, identifying the author of the tweet in question as a rabbi, adding that Voices of Goldstein were responsible for the post, not her.

What is the reach and impact of Tim Wilson’s anti-independent campaign on social media?

FactLab investigated Mr Wilson’s anti-independent campaign on Twitter and Facebook between April 1 and May 8. It looked at key terms, including independents, fake independents, so-called independents, teal independents, outsiders, Extinction Rebellion, GetUp (including all versions such as GetUp!), Climate 200, and trust fund.

Almost one-quarter of Mr Wilson’s tweets contain one or more of the keywords. This includes two retweets by the Liberal candidate for Wentworth Dave Sharma, one by Liberal senator for Victoria James Paterson and one by Liberal MP for Mackellar Jason Falinski.

Mr Wilson’s campaign is less focused on Facebook. Only 10 per cent of his Facebook posts contain one or more of the keywords. 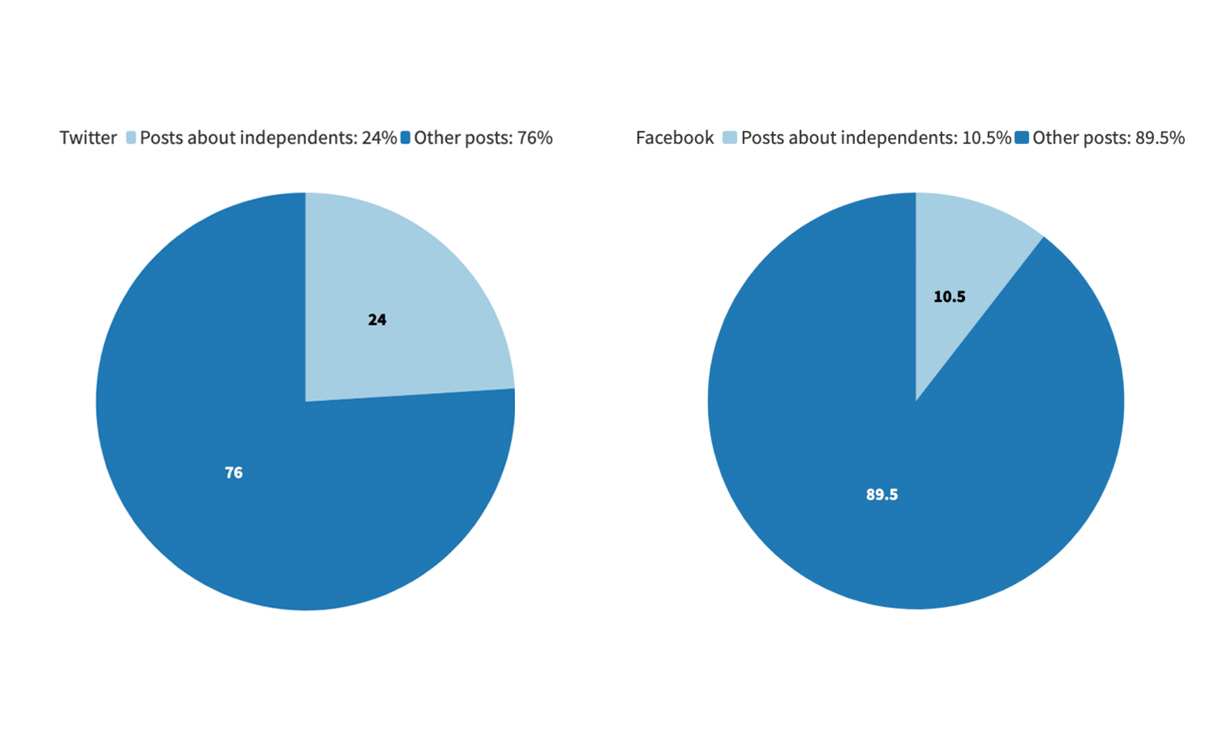 While anti-independent posts generally have had higher engagement than posts on different topics, they have also generated much negative response.

In many cases, Mr Wilson’s tweets generate a significant number of replies but fewer ‘retweets’.

The so-called ‘independents’ want you to find your voice so they can shut it down. Their own policy shows they want a technocracy, not a democracy where climate policy isn’t “tied to elections”: https://t.co/IXkB6MHfU9

Yesterday, Independent MP @MakeMayoMatter had the integrity to say they’d likely back the Coalition in a hung Parliament, aware Mayo had never been held by Labor. Why doesn’t the so-called ‘independent’ in Goldstein have the integrity to do so as well? Answer:#FakeIndependent

The view that Mr Wilson’s tweets attract significant pushback is supported by those sharing them. The amplifiers with the largest audiences were sceptical of or hostile to the views expressed by Mr Wilson.

Fact is @SimonAHac There’s more decarbonisation in that graph than this idling diesel truck you’re paying for … pic.twitter.com/AZarjD1GWQ

On Facebook, FactLab found no notable sharers of the relevant posts. The share count was generally low, with only 31 shares for the ten posts, meaning an average of 3.1 shares per post.

From Liberal Lite to Labor Stooge to Greens puppet, to fake independent to outsider to the target of the dirt unit to upstart white female to Charlie’s Angel to anti liberal groupie to…Brunswick values? Wait. What? This political life is fully weird. #GoldsteinVotes

How does online campaign spending fare in Goldstein?

Liberal spending on social media campaign advertising in Goldstein pales when compared to the large amounts they are spending in Kooyong and Wentworth.

According to the University of Queensland’s Election Facebook Ad Data Dashboard, the Liberal party has spent at least $86,650 and $26,170 in Kooyong and Wentworth respectively, since January 1, compared to at least $400 in Goldstein. 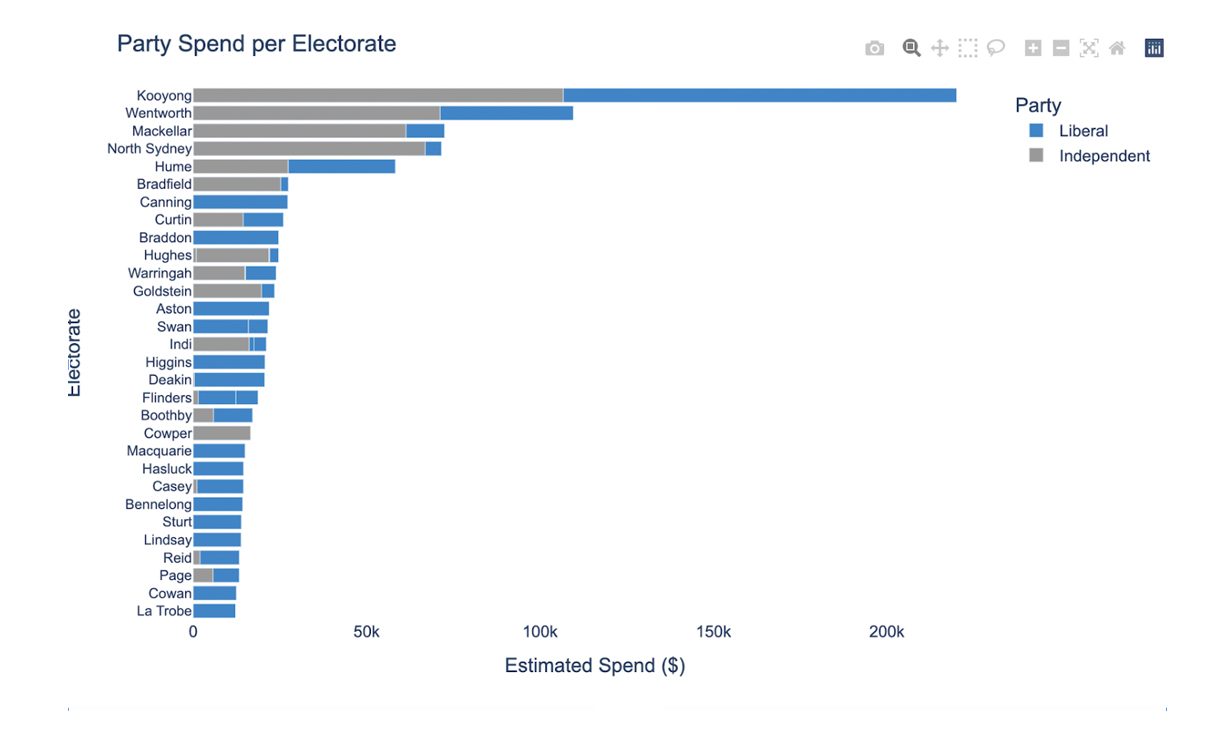 Similarly, Liberal spending on Facebook advertising in Goldstein is significantly less than the amount spent by Ms Daniel.

According to the University of Queensland’s Election Ad Data Dashboard, Ms Daniel has spent more than four times the amount on Facebook ads than Mr Wilson since January 1, 2022.

According to the Google Transparency Report for Political Advertising in Australia, which records election ad spending on Google, Youtube and partners, Tim Wilson has spent $150, while Zoe Daniel is not listed as a spender.

Ms Daniel is one of the 22 independent candidates supported by Climate 200.

Climate 200 has spent a significant amount on national advertising online. According to Google Transparency Report for Political Advertising in Australia, Climate 200 has launched 18 election campaign ads supporting independents since January 1, at a total cost of $8,550 on Google and YouTube ads. 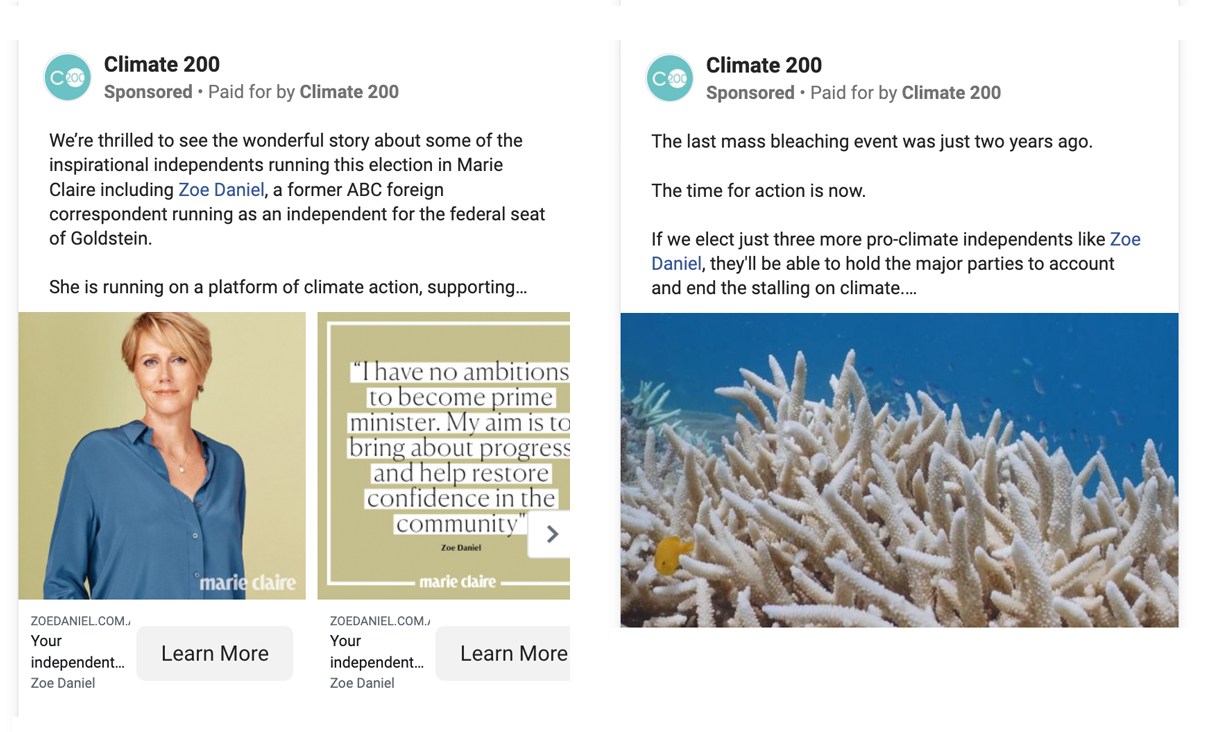 One of the most significant Climate 200 Facebook ads supporting Ms Daniel recorded between 100,000 and 125,000 impressions.

On the other hand, GetUp! has singled out Goldstein and Kooyong as the top priorities of its election campaign in Victoria and has noted its support for pro-climate independents working to unseat the Liberals.

Since April 1, GetUp! has made over two dozen tweets critical of Ms Wilson and the Liberal party.

With pre-poll now open, voters have the opportunity to vote for climate leadership #GoldsteinVotes pic.twitter.com/cQnwttEAMq