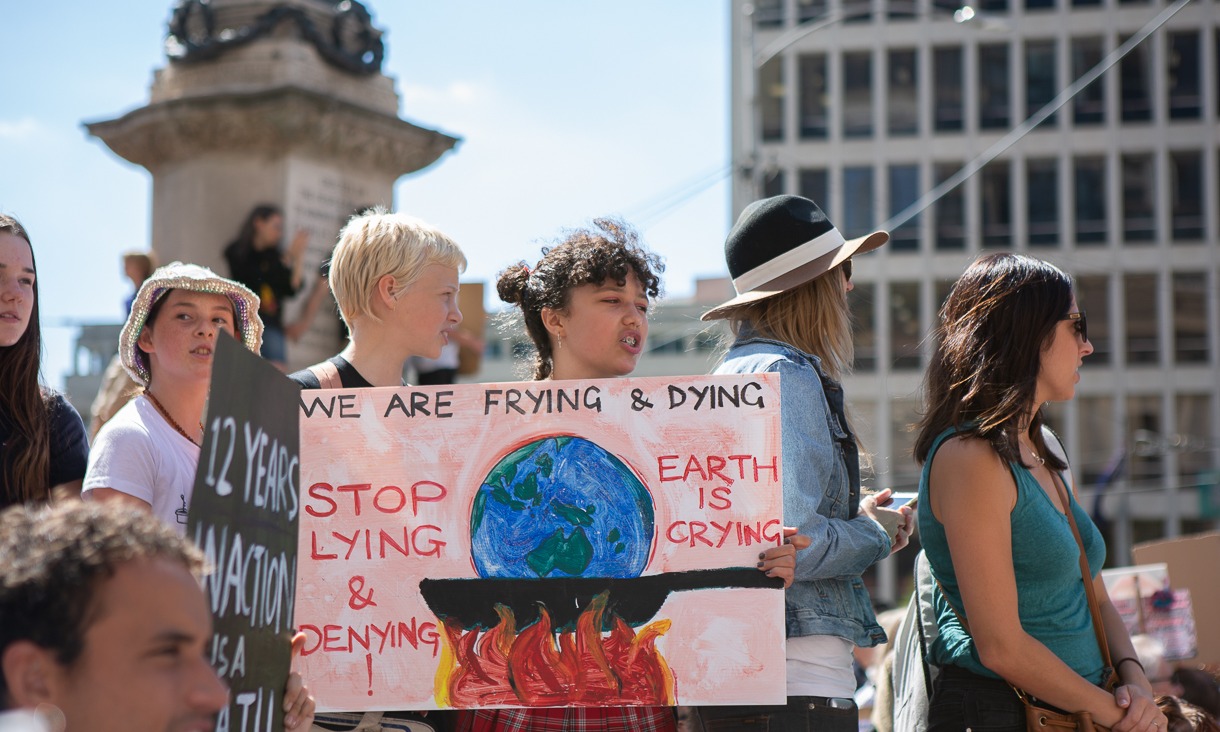 Around the world students are walking out of their classrooms again to protest inaction on climate change as part of the Global Climate Strike.

Children and young people are already living with the growing effects of global climate change, from rising sea levels to drought and food scarcity.

They are the first generation learning to live with global climate change, says Dr Blanche Verlie from the RMIT Centre for Urban Research, and it’s an experience never seen before.

“Young people are enduring the pain of the end of the world once known to them and are struggling to generate promising alternatives for themselves due to obstructions from the people in power,” Verlie says.

Verlie identifies six of the most common emotions experienced by young people in learning to live with climate change and how this is impacting them.

“The future, for me, is dark, cloudy, a black hole of uncertainty. I don’t know how it will play out.”

The outcomes of future climate changes are hard to plan and control because they are unpredictable and uncertain.

Uncertainty is often linked to anxiety and given the high uncertainty of specific climate change events, anxiety is a common emotional response.

Climate anxiety can also be understood as a disrupter to our sense of security and entitlement to a better future and therefore is a disabler of privilege.

There is uncertainty about how global humanity will respond and that serious responses might not be catalysed until a new destructive level of nature manifests itself.

This shows that climate anxiety disrupts our taken-for-granted beliefs about ourselves, human nature and our individual and collective abilities to act rationally or exert control over non-human nature.

“Climate change is huge, overwhelming, and I feel frustrated and angry. I am extremely cynical that humanity will do anything to mitigate climate change before it is too late.”

Feeling overwhelmed feels like drowning, being engulfed and submerged as we flail against tides far exceeding our strength.

In the context of melting glaciers, rising sea levels, bigger storm surges and more intense flooding, being overwhelmed seems likely to be a characteristic experience of climate change in more ways than one.

Like frustration, feeling overwhelmed emerges from encounters with problems of an incomprehensible scale, ones that do not just disable, but dissolve our sense of self.

Feeling overwhelmed is a common response to climate change due to the scale of the climate system and how interconnected it is. Leaving the lights on in Australia may mean death for polar bears, for example. This exerts a global pressure - the ‘weight of the world’ - on the shoulders of young people.

Climate change is a collective action problem. It’s easy for frustration to arise when we are faced with barriers or obstacles and are unable to achieve our plans, goals or ideals.

Feeling powerless to respond to climate change leads young people to feel frustrated, not only with their leaders, but with themselves because they feel they’re not achieving enough to create any impact.

On the other hand, frustration serves to articulate the inability and complicity young people share with others.

“I questioned whether my actions were creating any positive change. Was I simply another facet at the root of this problem?”

Climate change engagement efforts have often sought to induce feelings of guilt and for those of us who live in high-carbon economies or live high-carbon lifestyles, encountering climate change commonly involves the experience of guilt.

Guilt is a common emotional response because young people born into high-carbon lifestyles often question whether their actions are creating any positive change.

At other times, young people can feel climate complicity and collective guilt for being part of Western society that ‘hyperconsumes and wastes everything’.

“It struck me that the world as we know it, and the way we live, is going to dramatically change.”

Grief and sadness are characteristic responses to encountering climate change because it threatens relationships that we value, and therefore leads to many forms of loss.

It can be traumatic for young people knowing that their relationship with the land and world, and all the good things in it as they know, will not be same for them, their children or their grandchildren.

‘Despite the sometimes gloomy subject matter, I’ve often left lectures feeling hopeful, for I can begin to envisage the path ahead, and also how I might have a role in creating it.

Often we can feel hopeful and anxious about the same thing simultaneously.

Learning about and living with climate change is a rollercoaster of emotions between the painful and possible.

Hope can emerge through the actual or potential establishment of connections with other climate-changed humans: knowing that others share our frustrations, care about the world too, and are doing things to address climate change.

Through the Climate Strikes, young people can collectively work through ongoing pain to generate change and difference, and thus, better, more positive, yet never certain, futures.