From drug delivery to smart materials, researchers are using sound waves in surprising new ways. But they’re only just scratching the surface in understanding the potential of this pioneering technology.

The possibilities for sound wave technology is constantly being realised, with major advances being made through RMIT research.

High-frequency sound waves, inaudible to the human ear, are being used in myriad applications, from building advanced materials to nanoscopic drug delivery.

After 10 years of research, Distinguished Professor Leslie Yeo and his team at the Micro/Nanophysics Research Laboratory say they’re only scratching the surface of understanding this technology’s full potential. 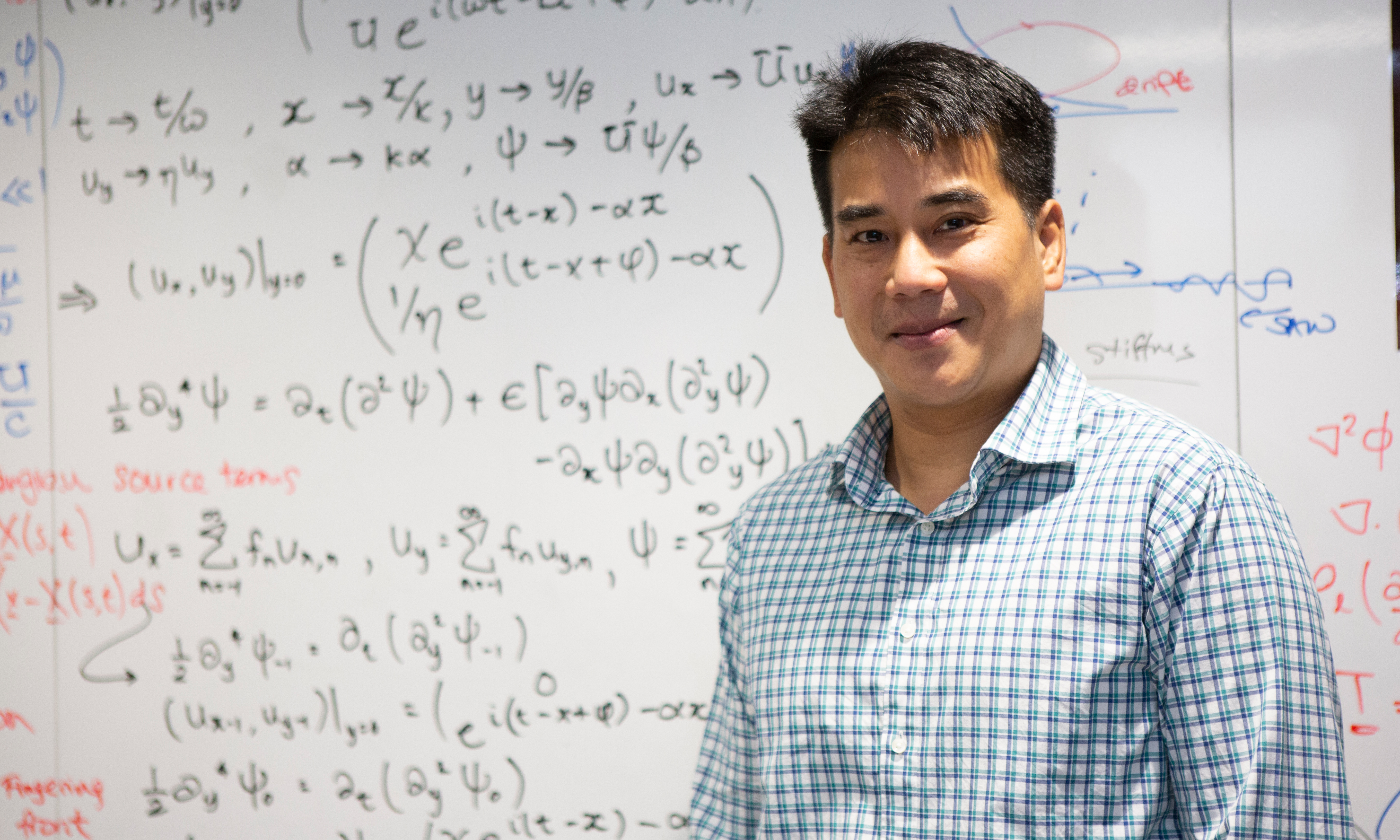 “This is because no one has been crazy enough to couple high-frequency sound waves into fluids and materials – we’re one of the very few groups in the world doing this work.

“The hard part is explaining what we see and applying that to solve practical problems. That part can take years, but that’s what we’re keen to do.

“In addition to building practical technology, we want to advance fundamental scientific knowledge as a foundation upon which we can better design devices.”

Scientists have been exploring soundwave technology for decades – ultrasound machines have been used to capture the first glimpse of a new baby or determine whether a strange growth is benign or not.

Ultrasound has also been used for driving chemical reactions—a field known as sonochemistry.

But that work focused on low frequency sound waves. Yeo and his team explore sound waves at high frequencies, above 10 MHz.

With low frequency sound waves, sonochemical reactions are driven by the violent implosion of air bubbles - a process known as cavitation.

But at higher frequencies, cavitation is largely absent, indicating there's a completely new and unknown mechanism behind the reactions.

The sound waves are generated on a microchip to precisely manipulate fluids or materials at nano scale - down to atoms and molecules.

Their research first started 10 years ago on examining the effect of high-frequency sound waves on fluids, which Yeo described as combining two extremely complex areas of science. 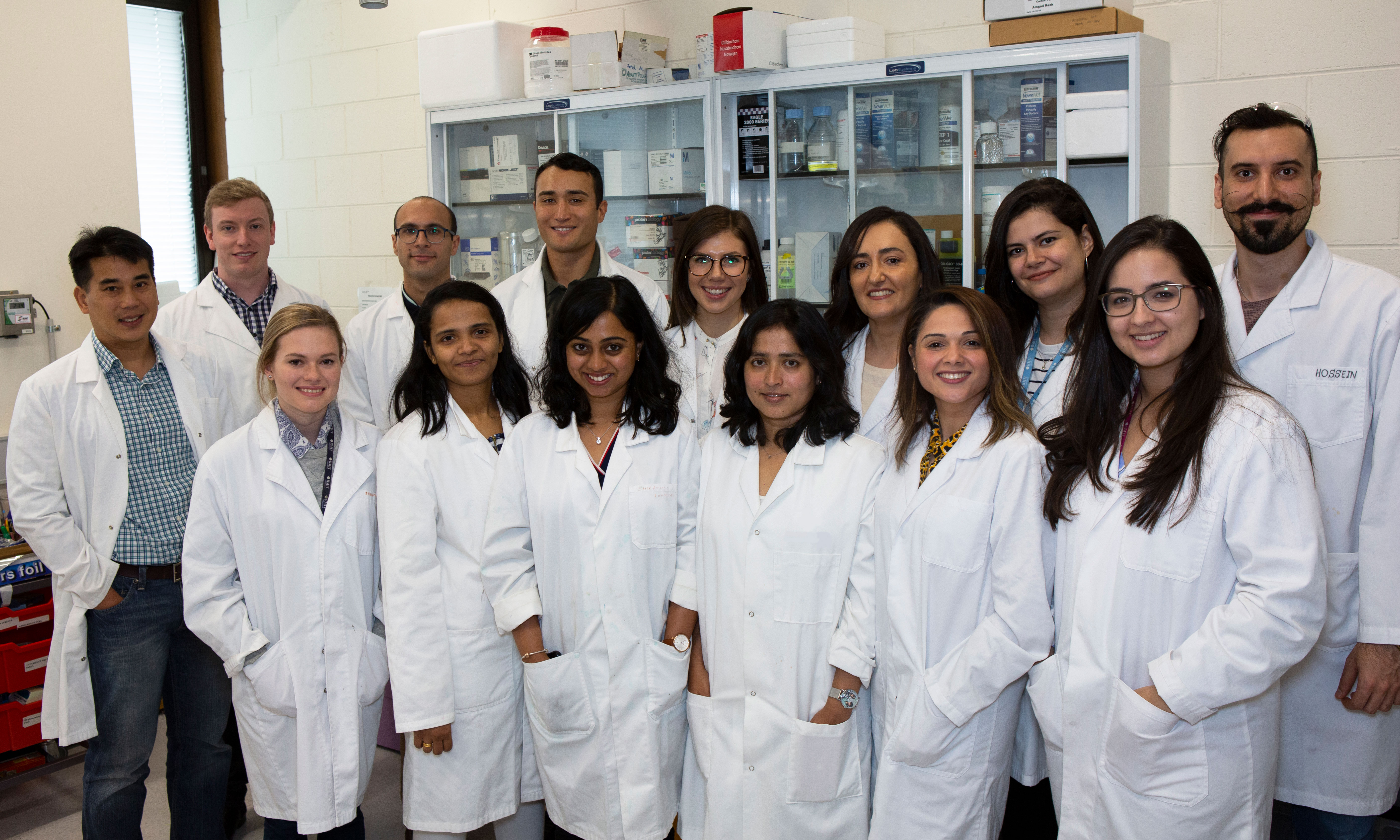 Yeo and his team at the Micro/Nanophysics Research Laboratory

“Fluidics is hard enough, but then you add that to sound and it’s just a jungle out there,” Yeo says.

Since beginning their research, Yeo says they have had to challenge a number of classical physics theories, at least when it comes to explaining what they see.

“In some ways, this is opening up a whole new field of high frequency excitation. It’s pushing the boundaries of our understanding,” Yeo says.

“We have developed theories that have been controversial, such as how fluids behave when vibrated from beneath by the sound waves.

“There are long-held classical theories from the mid-1800s on how these waves should behave, but these theories just don’t explain what we see.”

The team’s recent foray into vibrating nanomaterials and crystals with these sound waves is equally intriguing.

It is especially puzzling that the sound energy, with wavelengths of hundreds of micrometers, can manipulate entities like atoms or molecules which are almost a million times smaller.

“It’s like driving a truck into some Lego bricks and seeing them stack up neatly,” Yeo says.

Beyond fundamental discoveries, Yeo’s team are also translating the technology for practical benefit.

Using their sound wave technology, they have designed a revolutionary nebuliser called 'Respite' that can administer the next generation of drugs, such as immunotherapies, with precise doses to patients with debilitating lung conditions.

But more importantly, it can deliver large molecules – something current nebulisers can’t do. This opens the potential to painlessly administer vaccines. 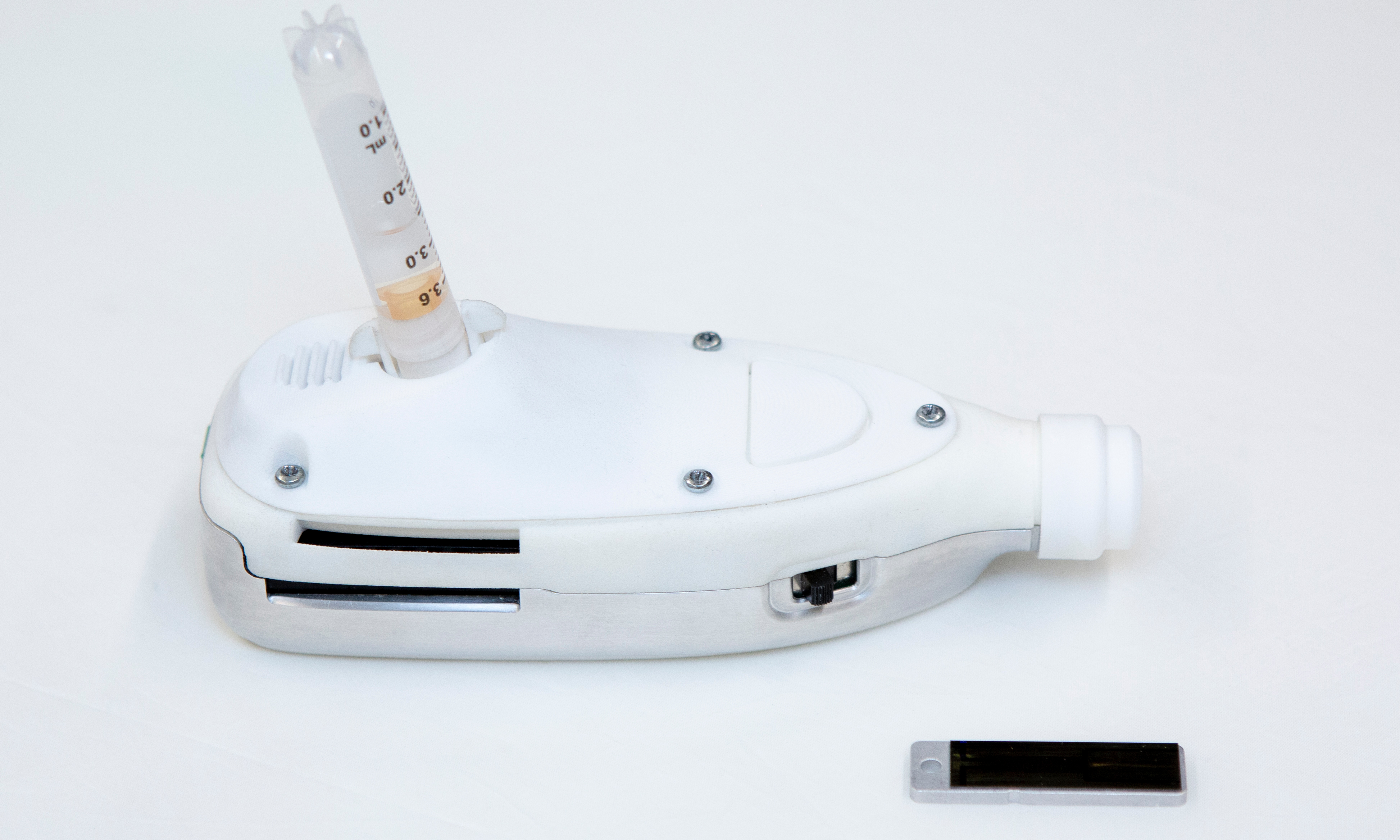 The revolutionary nebuliser Respite next to the sound wave creating microchip

Yeo understands how uncomfortable vaccinations can be.

“When I was growing up in Malaysia, my mother, who was a doctor, used to regularly vaccinate school children against TB.’’ Yeo says.

“It would be nice if we didn’t have to have so many injections.”

Not only is Respite painless, it is also more effective than standard nebulisers.

Respite is able to deliver more drugs into the lungs by using the sound waves to generate a fine aerosol mist containing the drug molecules.

“The problem with conventional inhalers is that most of the drug is deposited in the mouth and doesn’t actually get to the lungs, which isn’t a problem if the drugs are cheap, but it is when they are very expensive such as the new immunotherapy drugs,” Yeo says.

“Unlike one-size-fits-all inhalers, Respite allows the dose to be adjusted based on a patient’s size, age, gender, physiological profile and disease severity allowing for greater percentage of drugs getting into the lungs.

“Also, Respite doesn’t require inhalation to generate the mist like traditional inhalers, which can be a problem for people already suffering compromised lung function.”

The nebuliser has been successfully tested in clinical trials that showed it is capable of delivering more medicine, more quickly to the lungs.

Discussions are well advanced with an industry partner for the commercialisation of the Respite nebuliser, with hopes it could be in market within two years. 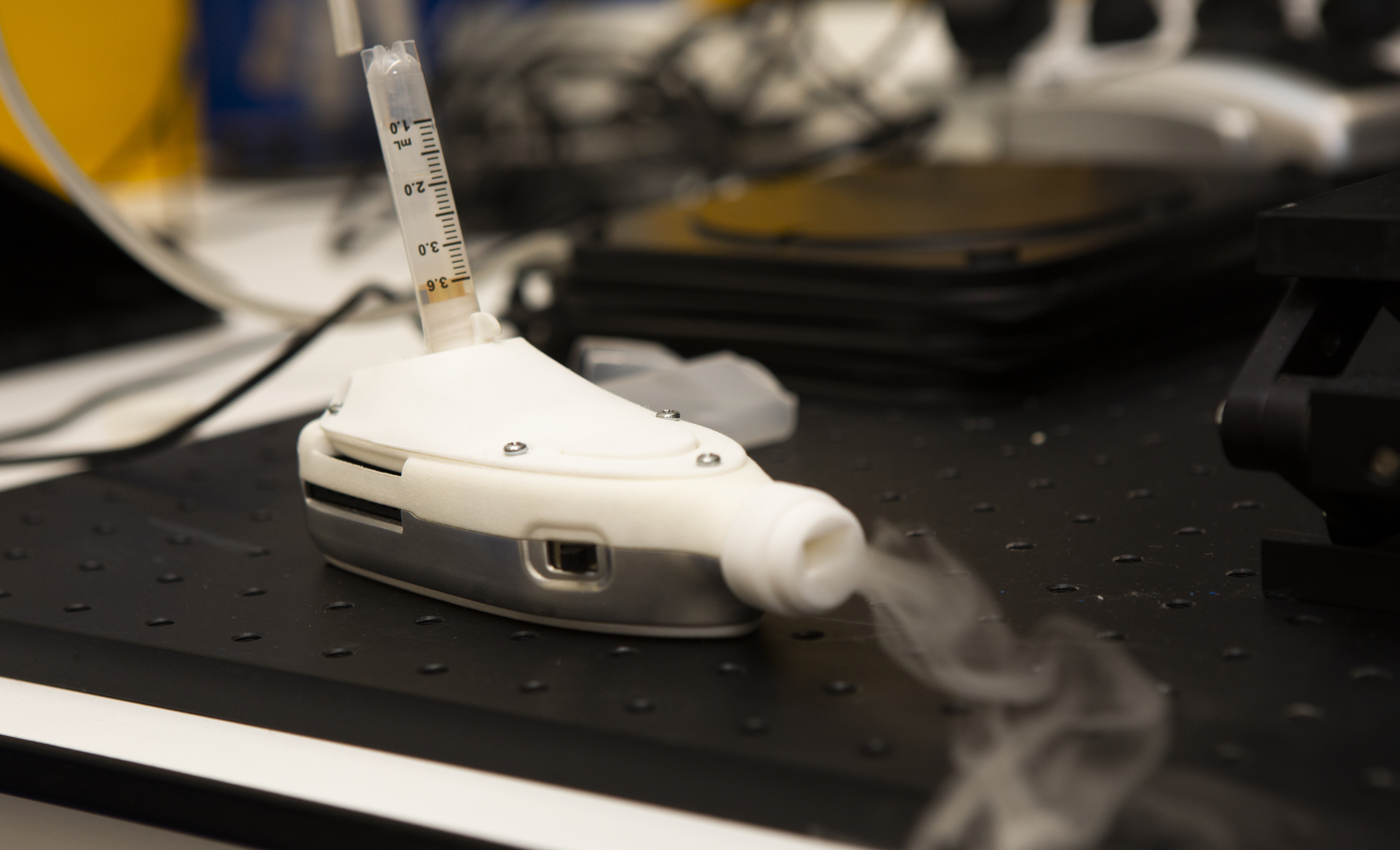 The sound wave technology has also been used in the emerging medical field of cell engineering, which has recently seen considerable success, particularly in treating some forms of cancer.

The new technique used the force of sound to push against the cell walls, allowing drugs to enter the cells more efficiently than current approaches.

Swathy Ramesan, a member of Yeo’s research team, has researched how sound waves increase the percentage of drugs inside the cells, but also reduce the number of cells that die.

“This opens the possibility of isolating a patient’s target cells, re-engineering them in the lab, and re-infusing back into the same patient,’’ Ramesan says.

‘’This new technique brings the reality of cell engineering for treating cancer and other diseases significantly closer.”

Other areas that the team have explored using the technology include:

The Micro/Nanophysics Research Laboratory’s research has been supported with funding from the Australian Research Council, National Health & Medical Research Council, a Johnson & Johnson World Disease Quickfire Challenge award, and an Accelerating Commercialisation Grant from the Department of Industry and Science.

New electronic skin can react to pain like human skin

From space suits to smart patches, pioneering advances in science and technology by RMIT researchers reveal the power of collaboration and imagination.

Let there be light: How photonics is transforming tech as we know it

From keeping satellites on course to powering the world’s fastest internet, the science of light is transforming technology and could hold the key to a vibrant new era for Australian manufacturing.