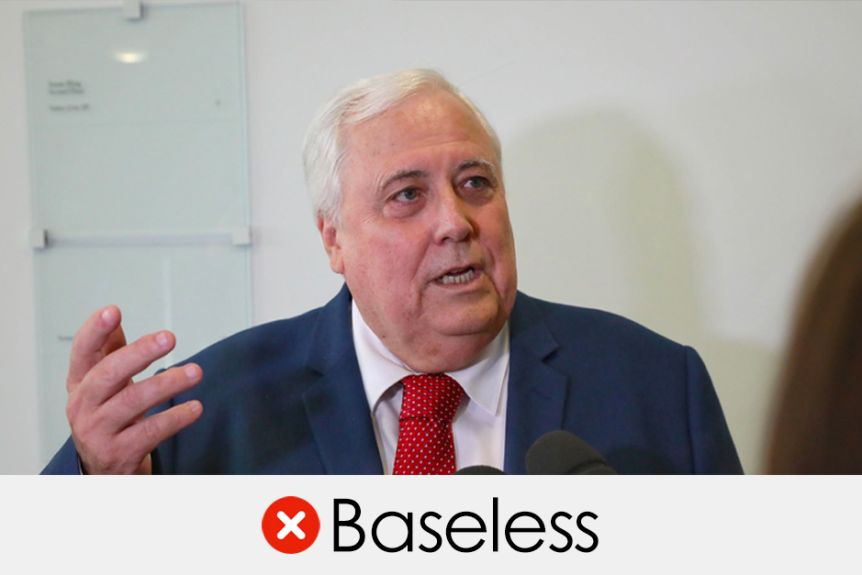 Businessman and former federal MP Clive Palmer made headlines when he donated nearly 33 million doses of the anti-malaria drug hydroxychloroquine to help fight the novel coronavirus in Australia.

Mr Palmer announced the gift in a statement on April 23, 2020, calling it the "best hope" for treating patients with COVID-19.

"On the 2 April 2020, Australia's Minister for Health, Greg Hunt announced hydroxychloroquine would be made available if doctors wish to use it to treat COVID-19 patients who are in Australian hospitals. Since that time, Australia's death rate from COVID-19 has been the lowest in the world and the curve has flattened."

Mr Palmer repeated the claim several times over the next week, first on Sunrise, then in full-page newspaper ads and again during an April 29 interview with Alan Jones.

So, has the use of hydroxychloroquine in hospitals been key to Australia's low COVID-19 mortality rate? RMIT ABC Fact Check investigates.

Experts consulted by Fact Check said there was no link between hydroxychloroquine and Australia's low mortality rate.

They said the death curve had flattened simply because confirmed cases had done the same.

Doctors could already prescribe hydroxychloroquine to Australian hospital patients with COVID-19 before April 2.

However, since March 24 the national medicines regulator has "strongly discouraged" doing so unless the hospital patient is part of a clinical trial or severely ill.

Experts said the drug's effectiveness against COVID-19 would not be known until the results of large-scale randomised control trials were published.

In any event, due to the lag between reported cases and deaths, it would likely take several weeks for an effective drug to reduce the death rate.

Mr Palmer spoke of Australia's death rate, which can be expressed in two ways: the case fatality rate or deaths per capita.

The case fatality rate shows deaths as a proportion of confirmed cases — meaning that if cases increase but deaths do not, the rate goes down.

Catherine Bennett, the chair in epidemiology at Deakin University, told Fact Check that Australia had expanded its testing in April to catch more mild cases, so it would be "meaningless" to track case fatality rates over time.

Greg Dore, who heads the Kirby Institute's Viral Hepatitis Clinical Research Program, said Australia's broad testing was "a major factor" in why its case fatality rate was low compared with countries such as Italy, Spain and the United States, whose counts were skewed towards sicker people.

Fact Check considers that readers would have understood Mr Palmer to be talking about Australia's deaths per head of population.

According to the Oxford University website Our World in Data, which presents official figures collected by the European Centre for Disease Prevention and Control, Australia's daily deaths peaked around April 4 before plateauing in mid-April.

Can the drug take credit?

Though Mr Palmer credited hydroxychloroquine with Australia's low death rate, experts said there was no link between the two.

Professor Dore said the mortality curve "could have been predicted by a turnaround in the case numbers".

"It was always expected that the death rate would be delayed a few weeks after the case numbers peaked", he said.

"We got to a peak in terms of case numbers in late March."

Professor Bennett also said the death rate was "a product of the number of infections in Australia, and the risk profile of those cases".

Cases peaked around March 25, she said, and given the average time it took for patients to succumb to the disease, "the daily number of deaths in Australia would be expected to have started to decline from the second week in April, which is exactly what happened".

Due to the lag between the curves, Professor Bennett said that if the drug had any effect, it would likely take several weeks to be reflected in the mortality figures.

Announcing his foundation - with the approval of the Australian government - has gone out & raided global supplies of hydroxychloroquine.

When was it approved?

Mr Palmer tied Australia's flattening mortality curve to April 2, claiming this was when the drug would be "made available" to hospitals.

In his interviews, he described the date as when Health Minister Greg Hunt "authorised" the drug for use and "did decide hydroxychloroquine could be used in Australian hospitals".

Fact Check attempted to reach Mr Palmer by phone and email seeking evidence for his claim but did not receive a response.

Hydroxychloroquine was already approved in Australia before the pandemic for treating malaria, lupus and rheumatoid arthritis.

Doctors could also prescribe it for conditions not specifically approved by the Therapeutic Goods Administration, the health department's regulatory body for medicines, in what's called "off-label" use.

In general advice issued in 2017, the TGA said it recommends off-label use only as a last resort but recognises it "may be clinically appropriate in some circumstances".

The Department of Health told Fact Check it did not regulate clinical decisions such as the individual prescription of drugs.

Available, but not recommended

Hydroxychloroquine was available for use in hospitals during April, the period covered by Mr Palmer's claim, but that's not to say the Government encouraged its use in treating COVID-19.

On March 24, citing concerns over shortening supplies, the TGA announced that "only certain types of specialists will be able to prescribe hydroxychloroquine to new patients".

"Given the limited evidence for effect against COVID-19, as well as the risk of significant adverse effects, the TGA strongly discourages the use of hydroxychloroquine outside of its current indications at this time other than in a clinical trial setting or in a controlled environment in the treatment of severely ill patients in hospital," it said in a statement. 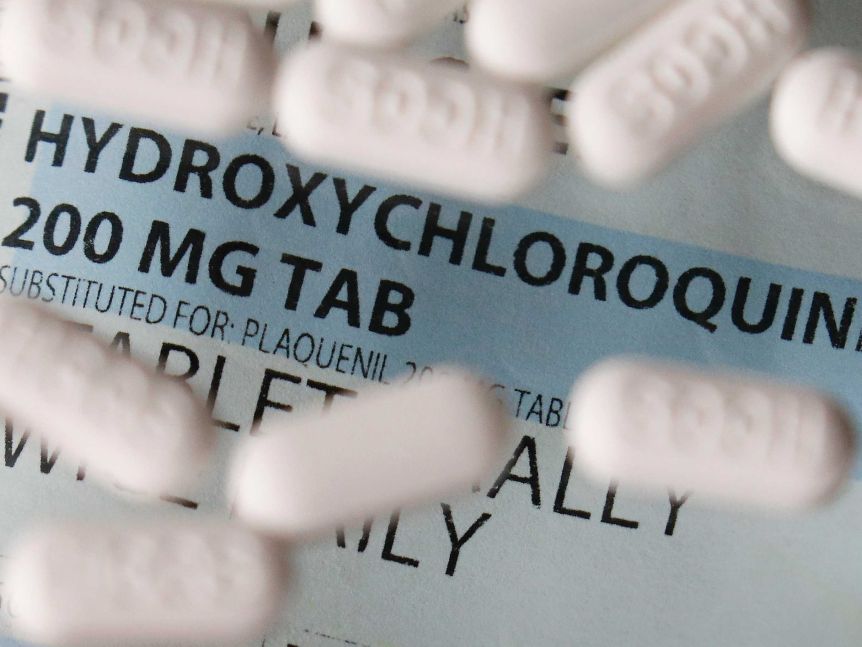 On April 1, Mr Hunt told A Current Affair he had just spoken to "an international supplier" and was "confident that we will have a significant supply of hydroxychloroquine, which will be available if doctors wish to use them with patients who are in hospital. Those are the terms".

On April 2, the Secretary of the Department of Health created an exemption under the Therapeutic Goods Act 1989 to allow the Government to stockpile hydroxychloroquine.

However, the department told Fact Check this was "not blanket approval or endorsement for the use of the drug for COVID-19".

Is it being used widely?

Professor Dore said that for a drug to dent the mortality curve, it would need to be both very effective and widely used among patients.

But while Mr Palmer said hydroxychloroquine had kept a lid on Australia's COVID-19 deaths, Fact Check found little evidence of widespread use.

The federal health department said it did not collect information on which drugs patients were receiving.

In a written statement, NSW Health said it "understands a small number of COVID-19 patients in NSW has received hydroxychloroquine prescribed by individual medical practitioners".

Fact Check approached the Victorian Health Minister but did not receive a response.

Professor Cheng said his hospital, one of Melbourne's largest, did not routinely prescribe the drug to COVID-19 patients and he "would be pretty surprised if it was [given to] more than a handful of patients".

Some national data on hydroxychloroquine use is available through a hospital surveillance study called SPRINT-SARI, Professor Cheng said, but this only covered patients in intensive care.

By April 26, intensive care patients accounted for fewer than 20 per cent of COVID-19 hospitalisations.

Does the drug work?

But while his Palmer Foundation website refers to a number of studies on the topic, the evidence available when he made his claim was not encouraging.

In a report published on April 14, experts from Oxford University's Centre for Evidence Based Medicine critiqued five clinical trials and found none of them "support the view that hydroxychloroquine is effective in the management of even mild COVID-19 disease".

"The existing data do not provide sufficient evidence to conclude that there is a clear benefit, lack of benefit or harm," Associate Professor Tong wrote.

"The observational datasets are prone to bias. The [randomised control trials] are too small and have not reported on clinically relevant outcomes."

Professor Bennett told Fact Check that without control trials where people in similar risk categories were prescribed or not prescribed the drug, "you can claim whatever you like, but there are too many moving pieces".

Analysing the largest of the studies shared on Mr Palmer's website — a case series of 1,061 patients with no control group — she said 95 per cent of patients had mild or no symptoms at the outset, while the more serious cases represented "numbers too small to compare with other COVID patient treatment studies".

"We're still waiting for the large randomised control trial evidence one way or the other. So I don't think we can say that it has efficacy, but we can't rule it out either."

Mr Palmer, too, has acknowledged the need to wait for the trial results, telling the Sunrise program: "If we have a successful trial and we don't have the drug, what good is it? ... I wanted to make sure that if the Government wants to approve it, if it wants to allow it out, we'd have the material."

Since then, two large-scale observational studies in New York City and New York state have been published, each with roughly 1,400 COVID-19 hospital patients.

Neither found hydroxychloroquine significantly reduced the risk of death, and while both studies lacked control groups, experts said they were robust analyses.