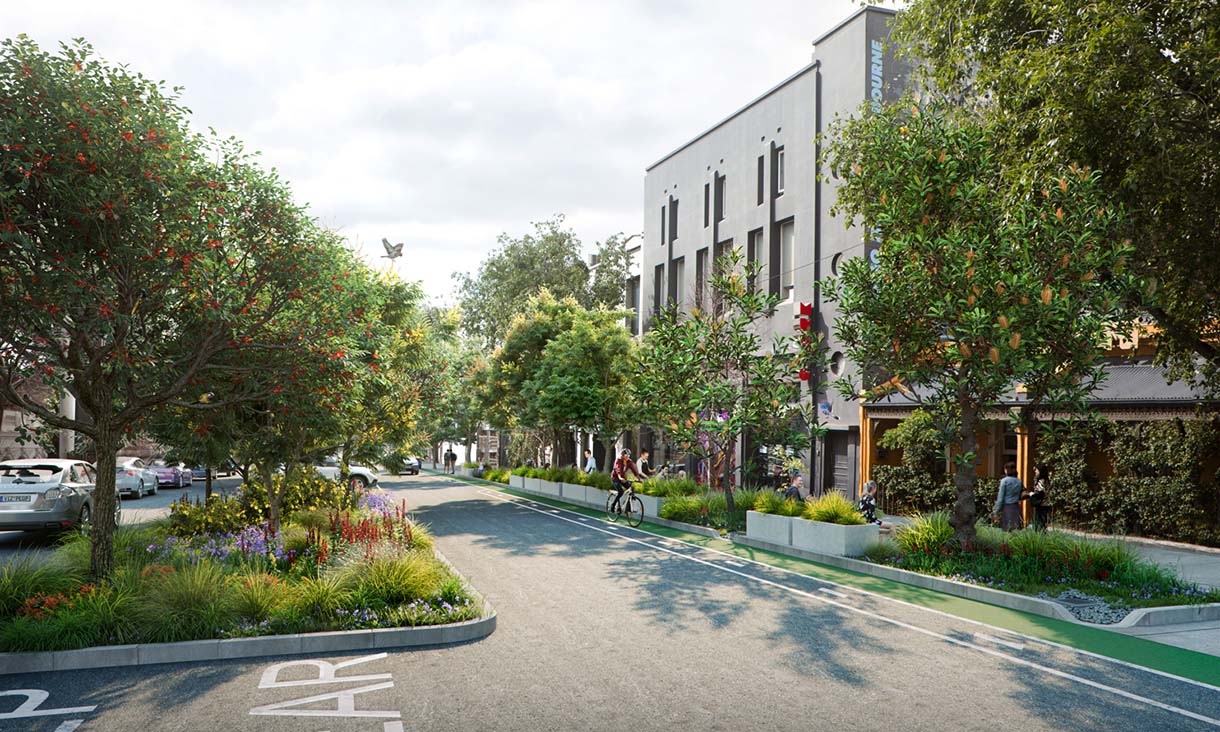 New research reveals up to half of Melbourne’s on-street parking spaces could be converted into hectares of new green space, without a net loss of parking.

The RMIT-led research, published in npj Urban Sustainability, mapped parking across the City of Melbourne and found up to half of street parking spaces could be moved within a 200 metre walk to existing vacant spaces in garages throughout the city.

The modelling showed that by moving on-street parking into parking garages, the city could make significant gains towards delivering its urban forest strategy, which aims to protect the city from heatwaves.

The study also shows how these changes could help reduce flooding and create healthier ecosystems for native birds and bees.

Estimates of garage vacancy rates were based on City of Melbourne data on off-street parking and residential parking vacancy rates, and on data of reduced numbers of workers coming into the city.

Moving into these vacant garage spaces could be achieved through existing, proven parking-management schemes, such as centralised car parking facilities and peer-to-peer parking apps, which already exist in Australian cities.

With at least 50% of parking left on the street, the modelling also ensures there will be continued access for loading zones and disability spaces.

“This is a huge opportunity to get the buzz back in our streets by making the city’s most urban areas more attractive and biodiverse,” said lead author from RMIT's Centre for Urban Research, Thami Croeser.

“It could also protect us from flooding and heatwaves, because these spaces are designed to catch stormwater and grow healthy canopy trees.”

While there would be no net loss of parking spaces, the conversion of on-street parking to green space could deliver enough new tree canopy to cover 30 MCGs. This would be enough to deliver a full third of the city’s ambitious 2040 target of 40% tree canopy.

The changes would also remove an area of asphalt equivalent to six blocks of the Hoddle grid, helping soak up stormwater and reduce flood risks.

Croeser said this would mean a shadier, cooler city, as well as a significant reduction of pollutants flowing into Port Philip Bay, and improved ecological connectivity for native species.

“The extra greenery could act as stepping stones across the city to help native species get around, linking isolated patches of habitat, so your kids might see a blue-banded bee or a native honeyeater on their walk to school.”

The research team worked with award-winning landscape architecture firm ASPECT Studios to visualise a realistic example of how the changes would look in Faraday Street, Melbourne.

“This study shows that our streets can be so much more than just parking lots,” says Croeser. “If you look at the image we prepared – you see it’s not just impressive, it’s also been carefully designed to actually work. We really can have this.”

“If we just put our cars in the garages that already exist all over the city, we can enjoy beautiful green streets that people actually want to spend time visiting.”

Croeser acknowledges that parking is a touchy subject at the best of times, but with a map of over 10,000 spots that these green spaces could be rolled out, he’s confident there would be some interest.

“I’d love to see the city take this on as a serious program of annual parking space upgrades, but it wouldn’t have to start big.  They could pilot the program in just two or three streets where the locals are really keen to go first, whether it’s commercial offices, a hospitality precinct or maybe a more residential spot in the inner ring of suburbs,” he said.

“I’m sure there are many city parents who’d like their kids to grow up around native birds and greenery instead of just concrete and pigeons.”