They say the artificial crystal offers the platform of choice for these technologies due to its superior performance and recent advances in manufacturing capabilities.

The international team, including scientists from Peking University in China and Harvard University in the United States, is working with industry to make navigation systems that are planned to help rovers drive on the Moon later this decade.

As it is impossible to use global positioning system (GPS) technology on the Moon, navigation systems in lunar rovers will need to use an alternative system, which is where the team’s innovation comes in.

By detecting tiny changes in laser light, the lithium-niobate chip can be used to measure movement without needing external signals, according to Mitchell. 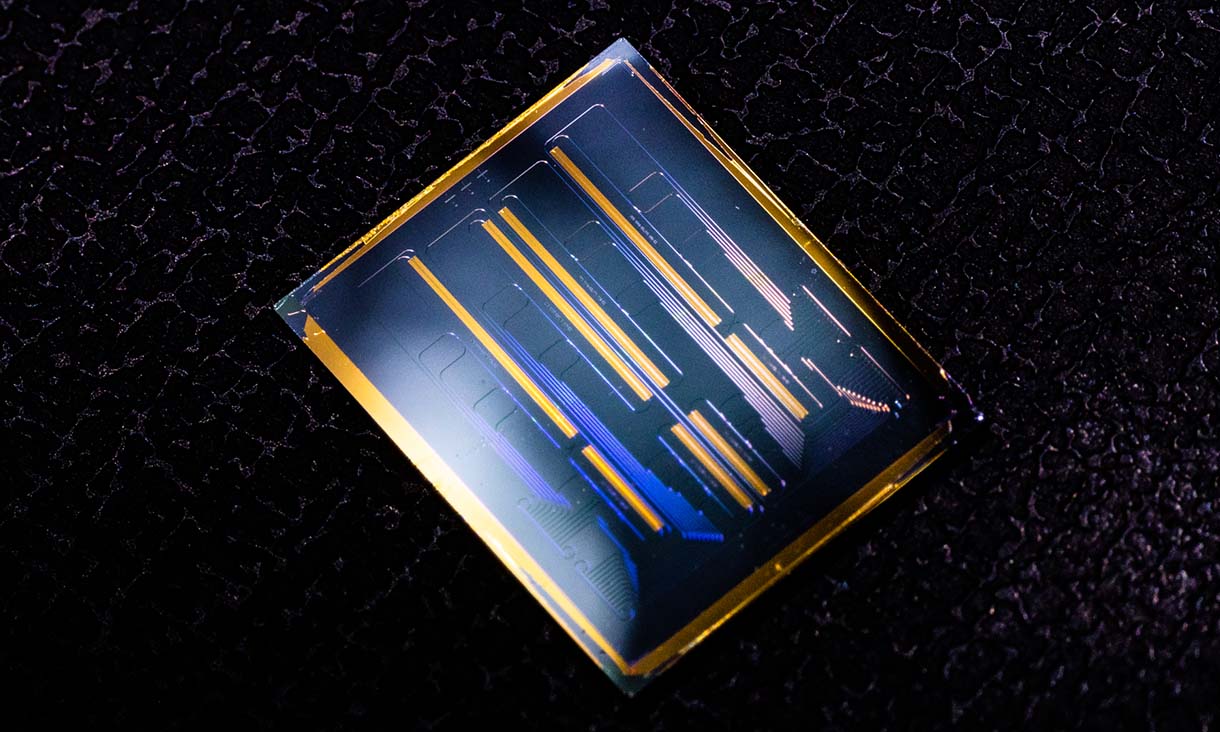 This lithium niobate chip is the size of a fingernail and is made on thin film lithium niobate and can be used in telecommunications, to make our internet faster. Credit: RMIT University

“This is not science fiction – this artificial crystal is being used to develop a range of exciting applications. And competition to harness the potential of this versatile technology is heating up,” said Mitchell, Director of the Integrated Photonics and Applications Centre.

He said while the lunar navigation device was in the early stages of development, the lithium niobate chip technology was “mature enough to be used in space applications”.

“Our lithium niobate chip technology is also flexible enough to be rapidly adapted to almost any application that uses light,” Mitchell said.

“We are focused on navigation now, but the same technology could also be used for linking internet on the Moon to the internet on Earth.”

What is lithium niobate and how can it be used?

Lithium niobate is an artificial crystal that was first discovered in 1949 but is “back in vogue”, according to Boes.

“Lithium niobate has new uses in the field of photonics – the science and technology of light – because unlike other materials it can generate and manipulate electro-magnetic waves across the full spectrum of light, from microwave to UV frequencies,” he said.

“Silicon was the material of choice for electronic circuits, but its limitations have become increasingly apparent in photonics.

“Lithium niobate has come back into vogue because of its superior capabilities, and advances in manufacturing mean that it is now readily available as thin films on semiconductor wafers.”

A layer of lithium niobate about 1,000 times thinner than a human hair is placed on a semiconductor wafer, Boes said.

“Photonic circuits are printed into the lithium niobate layer, which are tailored according to the chip’s intended use. A fingernail-sized chip may contain hundreds of different circuits,” he said.

How does the lunar navigation tech work?

The team is working with the Australian company Advanced Navigation to create optical gyroscopes, where laser light is launched in both clockwise and anticlockwise directions in a coil of fibre, Mitchell said.

“As the coil is moved the fibre is slightly shorter in one direction than the other, according to Albert Einstein’s theory of relativity,” he said.

“Our photonic chips are sensitive enough to measure this tiny difference and use it to determine how the coil is moving. If you can keep track of your movements, then you know where you are relative to where you started. This is called inertial navigation.”

This technology can also be used to remotely detect the ripeness of fruit.

“Gas emitted by ripe fruit is absorbed by light in the mid-infrared part of the spectrum,” Mitchell said.

“A drone hovering in an orchard would transmit light to another which would sense the degree to which the light is absorbed and when fruit is ready for harvesting.

“Our microchip technology is much smaller, cheaper and more accurate than current technology and can be used with very small drones that won’t damage fruit trees.”

Australia could become a global hub for manufacturing integrated photonic chips from lithium niobate that would have a major impact on applications in technology that use every part of the spectrum of light, Mitchell said.

“We have the technology to manufacture these chips in Australia and we have the industries that will use them,” he said.