Wurrunggi Biik: Law of the Land

A powerful statement of Aboriginal Sovereignty – a 2.4m possum skin cloak forged from cast steel and iron – stands tall at the city campus providing an enduring spiritual connection to Country at RMIT.

The Wurrunggi Biik: Law of the Land artwork was commissioned in 2017 as part of the New Academic Street Capital works project and RMIT’s 130-year celebrations.

Couzens said the artwork conjured Bundjil the Great Creator Spirit inside a towering possum skin cloak “watching over the Country and making sure that things are OK”.

“It’s a powerful statement that through a focus on the concept of Sovereignty encourages engagement with the possibility of a shared future,” she said.

“Wurrunggi Biik: Law of the Land gives rise to the opportunity to be heard - the work inserting a visual and visceral presence in place and evoking the etheric and spiritual.

“It is a reminder and representation of the ever presence of Aboriginal people, Ancestors, Spirit and the Law of the Land.

A publication celebrating the making of Wurrunggi Biik: Law of the Land was launched in September 2020.

The public artwork is located on Bowen Street at RMIT’s City Campus. 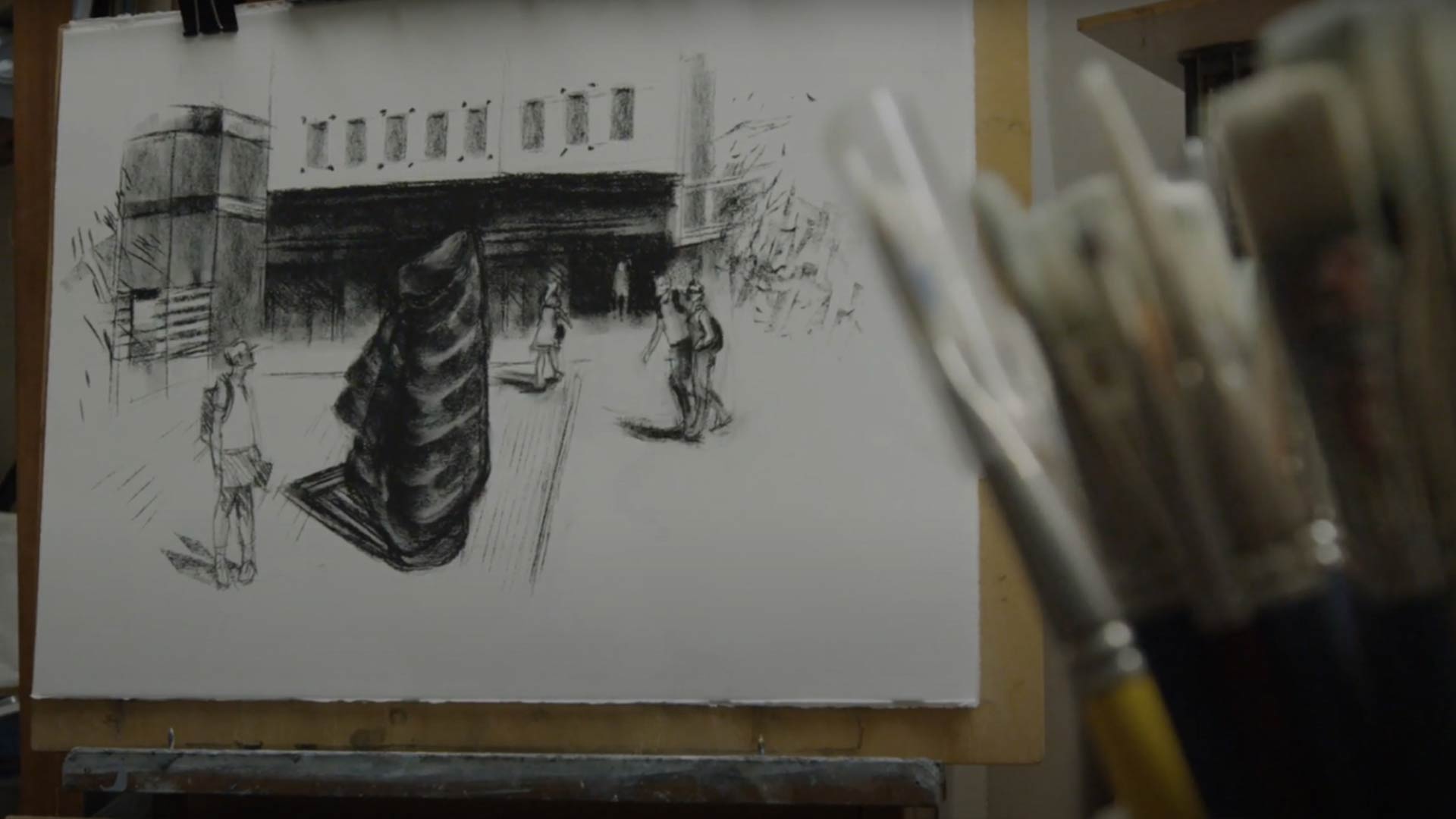 Transcript
Back to video
Expand all sections

Ngarara Place is an Indigenous garden within the heart of RMIT's City campus.

The garden was built to recognise the world’s oldest continuing culture and its design draws on four key pillars – Connection to Country, Cultural Motifs, Contemporary Aboriginal Art, and Knowledge exchange.

Created, designed and built by a mainly Indigenous team, the unique space includes an Indigenous themed courtyard area; amphitheatre-style seating; sculptural laser-cut smoke pit; and a space to host Indigenous ceremonies, gatherings and events – with the key design narrative of the landscape focusing on the seven seasons of the Kulin Nations.

Ngarara Place was designed by award winning Melbourne-based architecture and interior design firm Greenaway Architects and can be located at the key cross access of Chemistry Lane, Building 5 and the Alumni Courtyard.

In 2019, the Ngarara Place artwork was updated with a new design as part of an ongoing program to provide contemporary representation of Australia’s First Nations people.

The artwork was designed by Marcus Lee, a graphic artist and proud descendant of the Karajarri people in Northern Western Australia.

Marcus’ artwork was created to visually express the diverse environment that is nurtured at RMIT.

The design features a centralised symbol of a person, that is inspired by voice, sovereignty and the self- determination of Aboriginal and Torres Strait Islander members of the RMIT community. 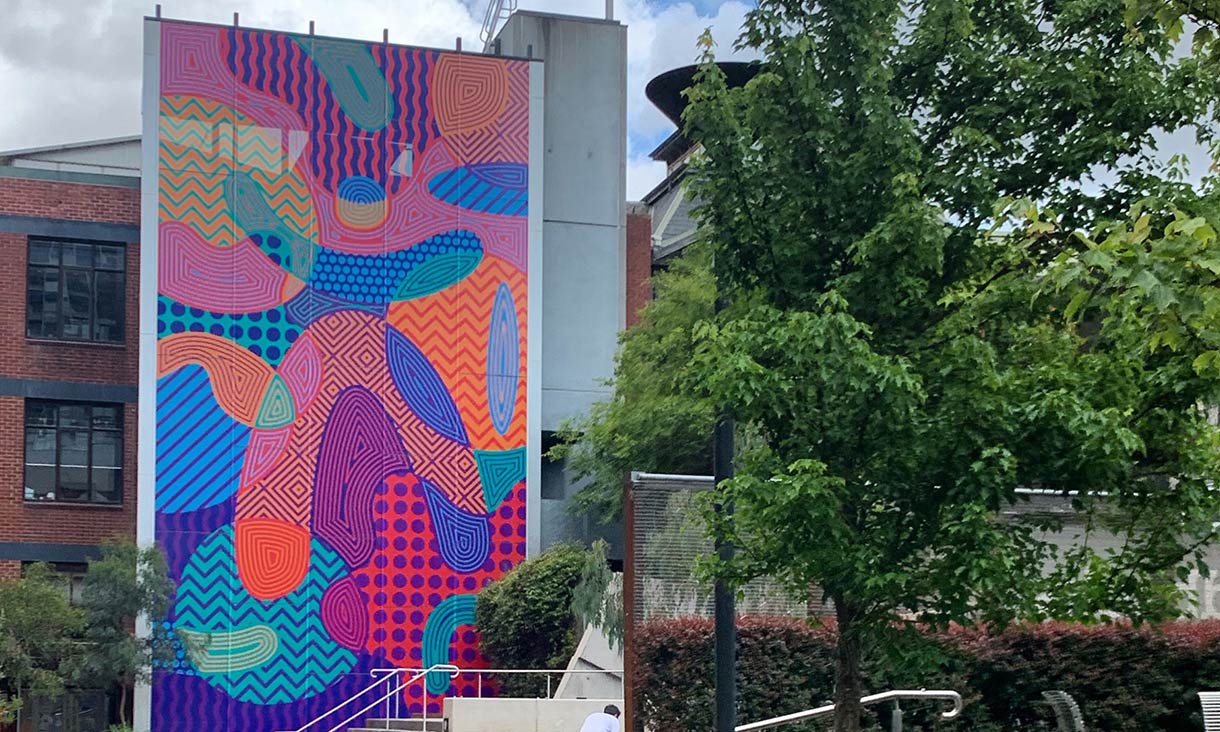 Artist Brook Andrew, along with Trent Walter, were commissioned by the City of Melbourne to develop a public artwork commemorating Tunnerminnerwait and Maulboyheenner, two Tasmanian Aboriginal men who were publicly hanged in Melbourne in 1842.

​Their artwork, Standing by Tunnerminnerwait and Maulboyheenner is situated on a small reserve at the intersection of Victoria and Franklin Streets (in between Buildings 11 and 13 on RMIT’s City Campus), in proximity to the site known to be where the two men were hanged.

Through a heritage trail you can learn more about the significant scarred trees on RMIT's Bundoora campus.

RMIT Bundoora campus has six scarred trees that are rare and fragile reminders of the resource harvesting techniques practised by hundreds of generations of Australia's Aboriginal and Torres Strait Islander people.

The tree scars tell us a great deal about the Wurundjeri clan, the traditional owners of the lands in and around Melbourne.

Keelbundoora is named after a Wurundjeri clan ancestor. As a child in 1835 he was present at the signing of the Batman Treaty, which marked European colonists’ arrival. Keelbundoora’s descendants helped create this trail.

Start the walk at the Flora Vale and Peppercorn Tree (meet outside Building 202 near the cafe, and follow the decorative totem poles). The totem poles are your sign posts.

Peppercorn trees, originally from South America, were often planted around homesteads in the early colonial period. The White and Clements families ran a dairy farm called Flora Vale in this area from the 1840s until the early 1970s.

Continue the walk on the footpath approximately 20 meters towards Building 220 heading towards Plenty Road and take note of the Wominjeka sign.

The Wominjeka signage (outside the front of Building 220)

“Wominjeka” means “Welcome” in the Woi wurrung language of the Wurundjeri peoples of the eastern Kulin nation. This starts the walk by officially welcoming you to this country and trail walk.

Continue on the footpath towards Plenty Rd past Building 224 (on your right). Stop at the BBQ/Picnic area where three painted totem poles mark the area.

Scars on living trees are from Aboriginal people deliberately removing bark or wood. Bark was readily available in the grassy woodlands before European settlement. Aboriginal people used it for shelters, weapons, watercraft, tools and containers. There are few scarred trees left today. This one was salvaged and preserved as a reminder to future generations of the Aboriginal history of this land.

Not every scarred tree has been deliberately damaged for cultural purposes – sometimes scarring is from disease, branch loss, fire or lightning. Sometimes fire masks evidence of deliberate damage.

Years ago, major limb loss, fire and decay in this ancient river redgum (Eucalyptus camaldulensis) created a large opening with nooks and crannies for possums and birds to shelter.

Note the Acknowledgement to Country plaque (on a large stone) and continue around the lakefront to the lake viewing platform.

Wetlands are home to aquatic and semi-aquatic indigenous plant species, water birds, frogs, fish and invertebrates. Wetlands were a major source of food, fibre and medicines for Aboriginal people.

Leave the Lake viewing platform and follow the path out of the BBQ/Picnic area walking on the gravel path towards the bush (on your right) and the totem poles.  Enter the bush area and clearing to see the following.

The birthing tree is located off the track in the bush area about 10 metres in. This tree has two major limbs crossed and fused together. This can happen naturally, but Aboriginal people made it happen by deliberately manipulating a growing tree. Either way, the trees are thought to have special significance. This one may have been used as a birthing tree for Wurundjeri women or just simply a landmark.

After exiting the clearing, follow the gravel path for a few hundred metres, past totem sign posts (the first is on the left behind building 204, another is on the right).The next totem pole is located where the bitumen road begins at the back of Building 223.  Follow the gravel path that leads you to the path at the back on the tennis courts (on your left), head towards Walert (Possum) house.

Follow the totem poles up past the Sports Centre (taking note of the beautiful Artwork), cross Clements Dr at the zebra crossing and walk around to your right past building 213 (towards back of the Sports Centre car park) then join the gravel path walking to the next stop on the trail: the Burls, the wire fenced area.  You will be facing the back of Walert House.

This old red gum has a number of bulbous woody growths near the base of the trunk, called lignotubers or 'burls'. The Wurundjeri people sometimes removed the burls and crafted them into water containers called tarnuks.

Continue on the gravel path walking towards the wood fenced gum tree.

Some of these red gums are well over 400 years old.  This tree shows evidence of three different scarrings. The original scar may have been of cultural origin, but later scarring – probably caused by fire – has obscured the evidence.

This woodland used to have a sparse cover of red gums over scattered wattles, with a dense ground layer of grasses and forbs, such as kangaroo grass and yam daisy. Yam daisy tubers were a staple Aboriginal food.

The area once had kangaroos, goannas, snakes, birds of prey, ground-dwelling birds, and invertebrates such as beetles, ants and grasshoppers. The local Friends of the Bundoora Red gums group are currently restoring the area to its original appearance.

The scar on this tree is probably from bark being deliberately removed to make roofing material or a small food-collection canoe. The ovoid shape of many scars suggests a canoe but sometimes it’s just the tree’s natural regrowth pattern after the bark has been removed.

The process of building a canoe began with outlining the bark and then making small cuts using a stone axe. The bark was then carefully levered off so it wouldn’t split. Once removed, it was soaked in water and then scorched over a fire to prevent decay.

The Resource tree is to the right side of the path.

Trees were major food sources for the Wurundjeri people. Birds, eggs, honey and possums could all be harvested from trees. Some trees are scarred with holes for smoking an animal from its refuge and sometimes access holes are cut higher up.

It looks as though an access hole may have been cut into this tree. There is also a massive scar on the reverse side, probably from losing a major limb, followed by subsequent fire damage.

The Rectangular cultural scar is on a tree to the right side of the path (you may have to venture in the bush area to see this).

This is a highly significant tree. The scar’s size suggests the bark was used to build a shelter. If a scar is rectangular and extends to the ground it usually means Europeans took the bark, perhaps for weatherproofing in a building. But the amount of healing regrowth around this scar suggests a large slab of bark was taken by Aboriginal people well before European settlement in the early 1840s.

Follow the gravel path trail to arrive at the Frog pond and another totem pole signpost.

There have been six species of frogs recorded in Bundoora, most of which need the wetlands to survive. Frogs have been around for 190 million years and are known to be an accurate indicator of environmental wellbeing.

Follow the gravel path around the boundary of Bundoora Campus.  This will take you to Number 12 on the trail.  The re-vegetation site is behind the wire fence.

The Friends of the Bundoora Red gums Inc, a volunteer organisation, has begun the long process of restoring the Red gum Grassy Woodland to its former glory. The have planted Indigenous species including the next generation of red gums.

Continue to the last totem pole. This backs onto the car park and is the final destination of the walk.

The Keelbundoora Scarred Tree and Heritage Trail was proposed by RMIT Student Services Group and the Ngarara Willim Centre to show due respect to the Wurundjeri people and their history on the land now occupied by RMIT University Bundoora campus.

We are grateful to the Wurundjeri Land Council and their representative, Annette Xibberas, for expert guidance with developing this trail and creating the brochure and signage.