Will robots eat our jobs?

Will robots eat our jobs? 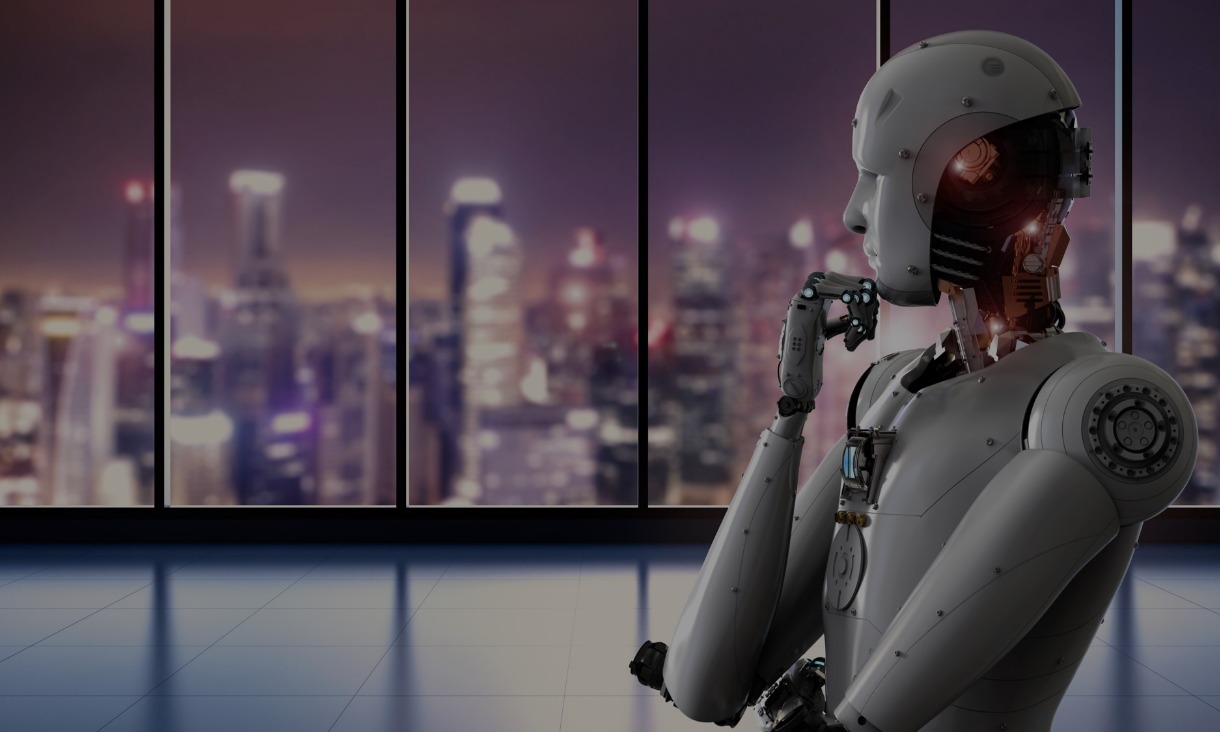 According to experts the future isn't coming quickly, it's already here.

These were just some of the topics tackled in front of 400 students, staff, alumni and industry partners at an event at RMIT today, which coincided with the University's 131st birthday.

At the Will Robots Eat our Jobs? event, Vice-Chancellor and President Martin Bean was joined by Head of Innovation at Ericsson Australia and NZ, Founding Director at Umps Health and RMIT alumnus Sarah Goss; Associate Dean of Computer Science and Software Engineering Professor John Thangarajah; and ABC 7.30 reporter Madeleine Morris.

The panel all agreed on one thing – the future wasn’t coming quickly, it was already here.

By 2020, 50 billion ‘things’ are expected to be connected to the internet, 500 million virtual reality headsets will have been sold and 85 per cent of customer interactions will be managed without a human.

Fresh off the back of yesterday’s world-first Amazon collaboration announcement, the Vice-Chancellor shared his perspective on the changing world of work, future careers and the importance of being able to “shift” in an ever-changing landscape.

He said with roughly half of the jobs that exist today likely to be replaced in the next 20 years due to automation, this has made Universities more relevant than ever.

Universities were no longer seeing themselves as largely serving 18 to 24 year-olds. In this new era of 'lifelong learning', disruption had dramatically expanded the learner pool to include students as young as 16, right up to 75. 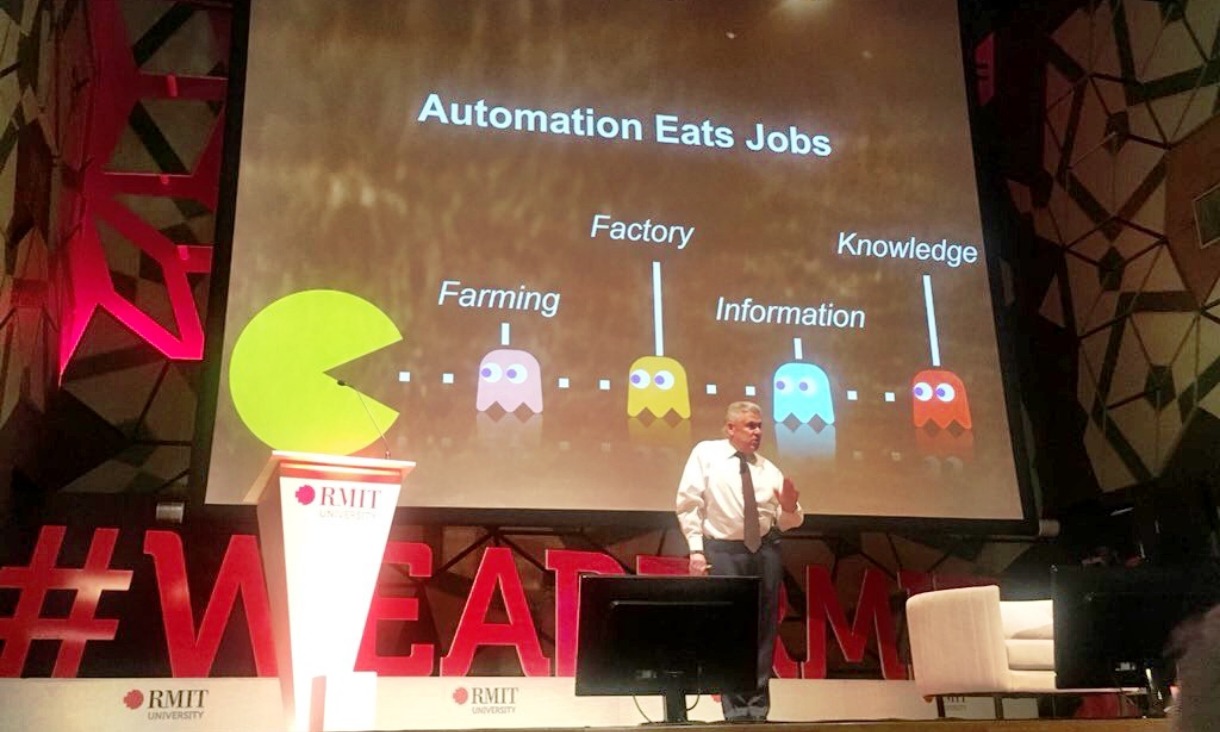 So will robots eat our jobs?

While the answer was ‘yes’, with lower skilled jobs expected to lose out in the short-term, the conversation outlined why it wasn’t quite as simple - or scary - as that.

“As far as I’m concerned there is no question. The reality is that automation eats jobs – from farming to factories to information technology,” Vice-Chancellor Bean said.

Acknowledging that while this paradigm of “shift happens” wasn’t new, he said the acceleration of automation was certainly a new challenge.

“Every time there is a shift, we need to adjust.

“If we construct our education systems, our communities, our societies in the right way – for as many jobs that get eaten, it gives birth to an amazing number of new opportunities for us as human beings to explore, to enrich, to lead vibrant lives…that’s why education is so important. That’s why we can’t sit still.”

Digital visionary Kevin Kelly said human desire to make things smarter would have a profound impact on nearly everything we did and referred to the technology future as a team: that of a human together with AI.

Innovator Sarah Goss drew parallels with the way machines were assisting healthcare providers to speed up the process of analysing information and providing alternative options, but noted that the final course of action ultimately sat with the healthcare professional.

“[Tech] provides great potential to enhance the ability for us to do our jobs,” she said.

AI expert John Thangarajah agreed and said technology had an incredible capability of extending and enhancing human skills but noted that one of the things humans did better than technology was “understand”.

Todai Robot, the AI project that performed in the top 20 per cent of students for a University entrance exam without actually understanding it, was a great example of this.

Are universities adequately preparing learners for the future?

According to an EY report released earlier this year, 42 per cent of current and past University graduates felt their degree needed to be overhauled.

In order to close skills gaps and prepare students for life and work, the panel identified industry collaboration, course co-creation and microcredentials as the future.

Goss said the future world of work meant that careers weren’t locked in for life and it was important to pick competencies, not industries.

Her advice: “find out what drives you, think about a cluster of skills and create a collection of these skills that are transferable”.

The ability to construct a personalised portfolio and build 'soft skills' was said to be more-and-more important in a rapidly changing world, as was the ability to access courses that closed skills gaps quickly.

According to the Deloitte Future of Work 2017 report, two out of three jobs would be soft skills-intensive by 2030.

Skills for an exponential economy were noted as adaptability, grit, critical thinking, empathy, communication, entrepreneurship and learning to learn, with resilience flagged as the number one attribute sought out by today’s employers.

Goss said there was tremendous power in preparing individuals to "think like mini CEO’s”.

The Vice-Chancellor challenged traditional thinking that saw education as a one-way pathway and highlighted a University’s important role in breaking down those classifications.

“I think we need to get out of some of the elitist beliefs that the ability to skate into where these new jobs are, somehow is predefined by what our current state of education is,” he said.

“The great value of technology is to drive access to as many people on the planet to quality education as we possibly can.

“That’s why microcreds are so important…we can’t all necessarily put our job and our family on hold to go back to University.”

RMIT is part of a transformation currently occurring in the education sector with 8000 micro-credentials now completed by students, rapidly growing interest in RMIT Online, and the first blockchain and Apple App Development with Swift short courses selling out in under a week.

While there may not be one single solution for organisations, institutions or learners, what we know is that the impact of rapid change is expected to be widespread as people are forced to up-skill and re-skill, and organisations are driven to shift.

“If we allow education to be tracked to just a few, with the march of technology and the collision with the people that own the robots, we may be looking at a very dark future indeed.”