From coffee to concrete: Engineering solutions to our most pressing problems 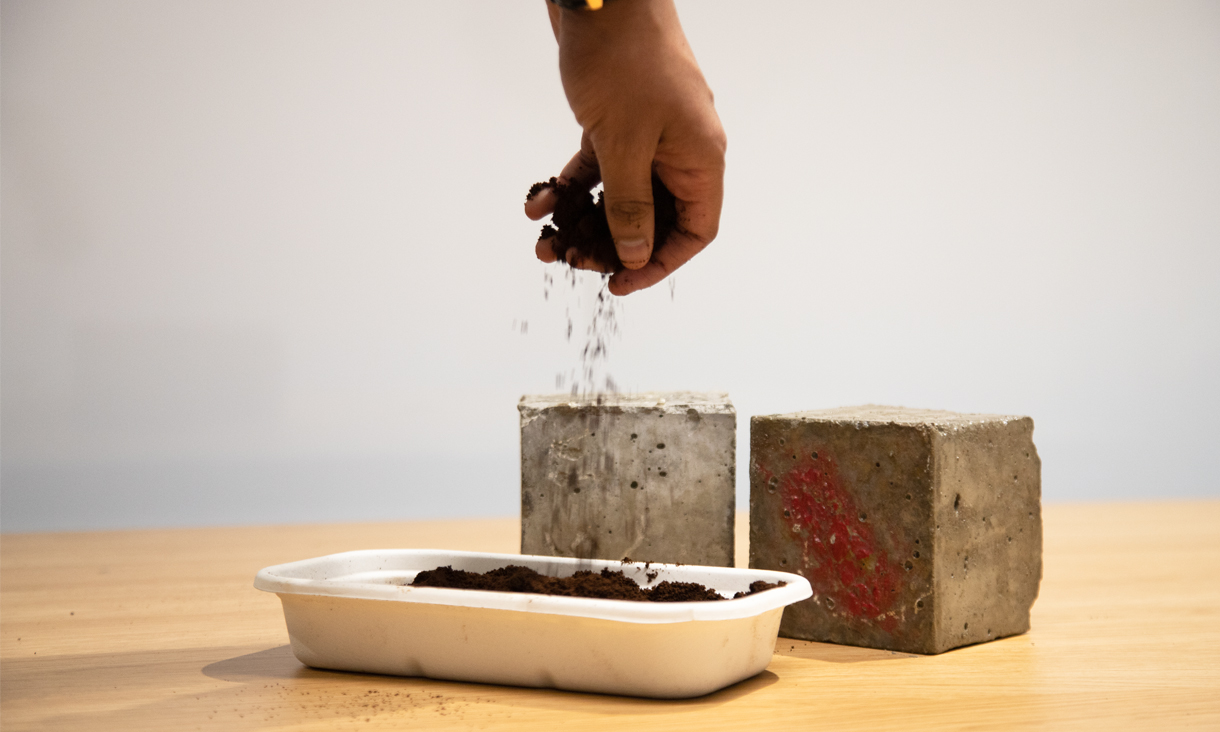 From coffee to concrete: Engineering solutions to our most pressing problems

A new project from RMIT University could see the waste from the 1.3 million cups of coffee drunk daily in Australia turned into concrete used in homes, driveways or office buildings.

As part of the venture, a keen coffee-loving engineering lecturer and his students have looked to the construction industry for a novel solution to reduce the amount of coffee grinds going to landfill – using them in concrete.

Most concrete mixes contain up to 80% sand – the third most used resource on the planet. But even this seemingly endless resource cannot keep up with current demand, and extracting it from places with fragile ecosystems can have a huge environmental impact.

The group found they could replace up to 10% of sand in a concrete mix with coffee grounds and have produced sample “coffee bricks”, which will be on display at RMIT’s EnGenius event on Wednesday 23 October.

The event will see more than 1,000 final year engineering students from 11 disciplines showcase their projects and products to industry and the public. 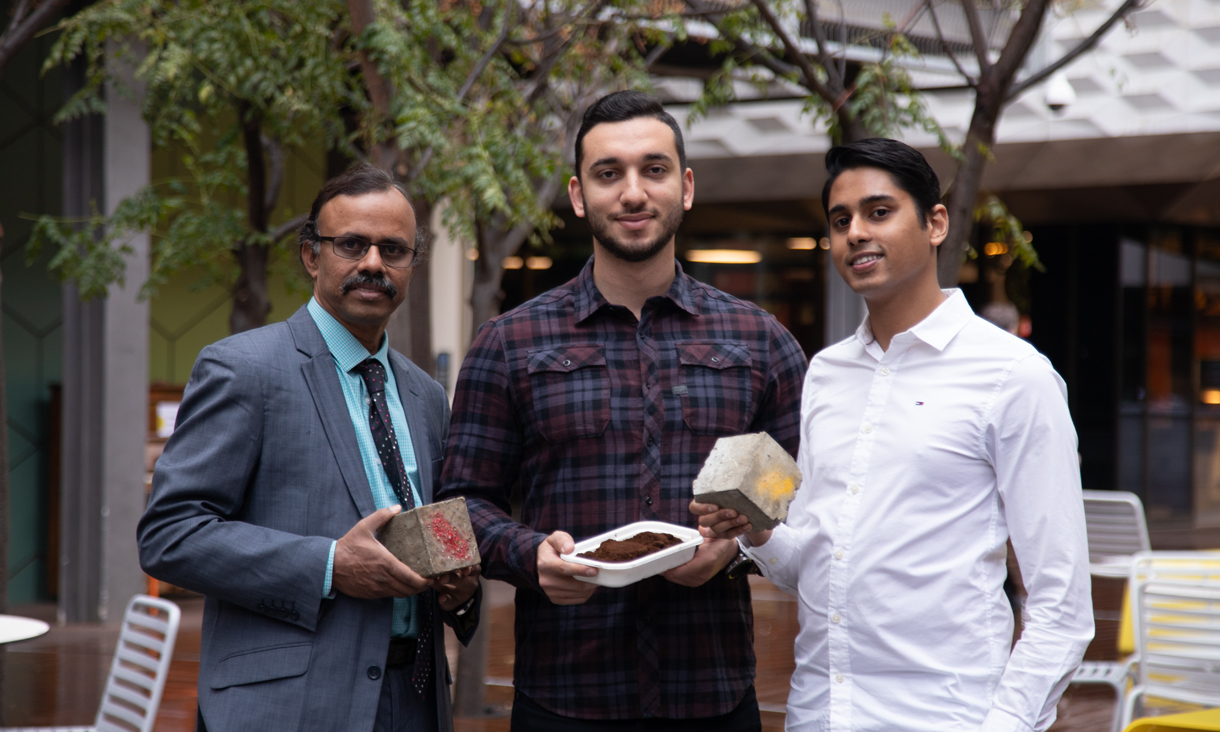 Bachelor of Engineering (Civil and Infrastructure) (Honours) students Senura Kohombange and Anthony Abiad worked with Senior Lecturer in the School of Engineering Dr Srikanth Venkatesan to test and develop the “coffee bricks”.

“It seems fitting then that we’re working on this project in Melbourne, a city known for its great coffee culture,” Kohombange said.

“We are very excited to present the project, share the idea with others and showcase how some innovative thinking can turn a waste product into an everyday construction material.”

There were an estimated 2,600 cafes in the City of Melbourne alone in 2017, producing about 156,000kg of coffee-ground waste every month.

Venkatesan said as a regular cappuccino drinker he was inspired to find a solution to the waste he was making each day.

“The biggest challenge is ensuring the addition of spent coffee grinds does not lead to a reduction in strength of concrete, and this is the focus of further testing and development to make this product viable for use in real-world applications,” he said.

A helping hand for prosthetics users 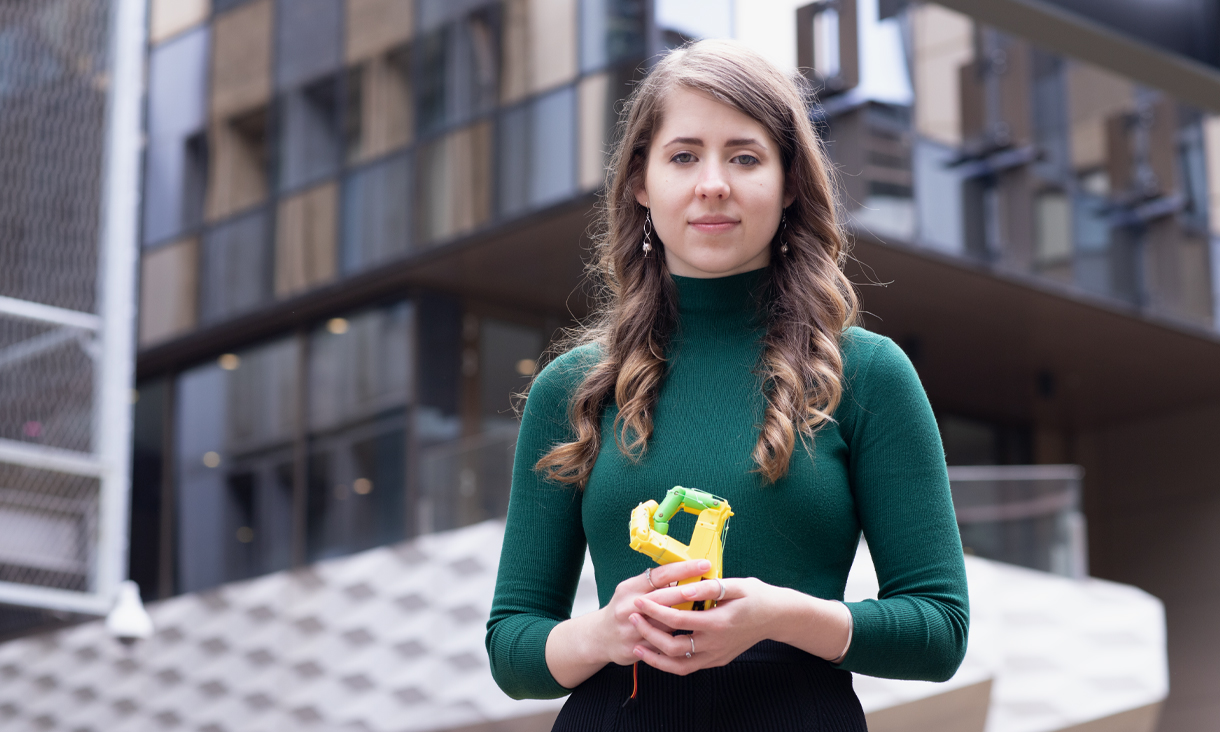 Prosthetic hands can provide crucial independence to people with full and partial hand loss, but not all hands fulfil the needs of amputees, with 30-50% of them not using their prosthetics regularly.

Current prosthetic fingers can only maintain an extended position passively, meaning that flexing the fingers to hold on to objects requires constant power consumption.

Bachelor of Engineering (Honours) student Sabrina Meikle said was motivated to design a better solution, mimicking real-life hands to provide amputees with the realistic feeling of a limb. 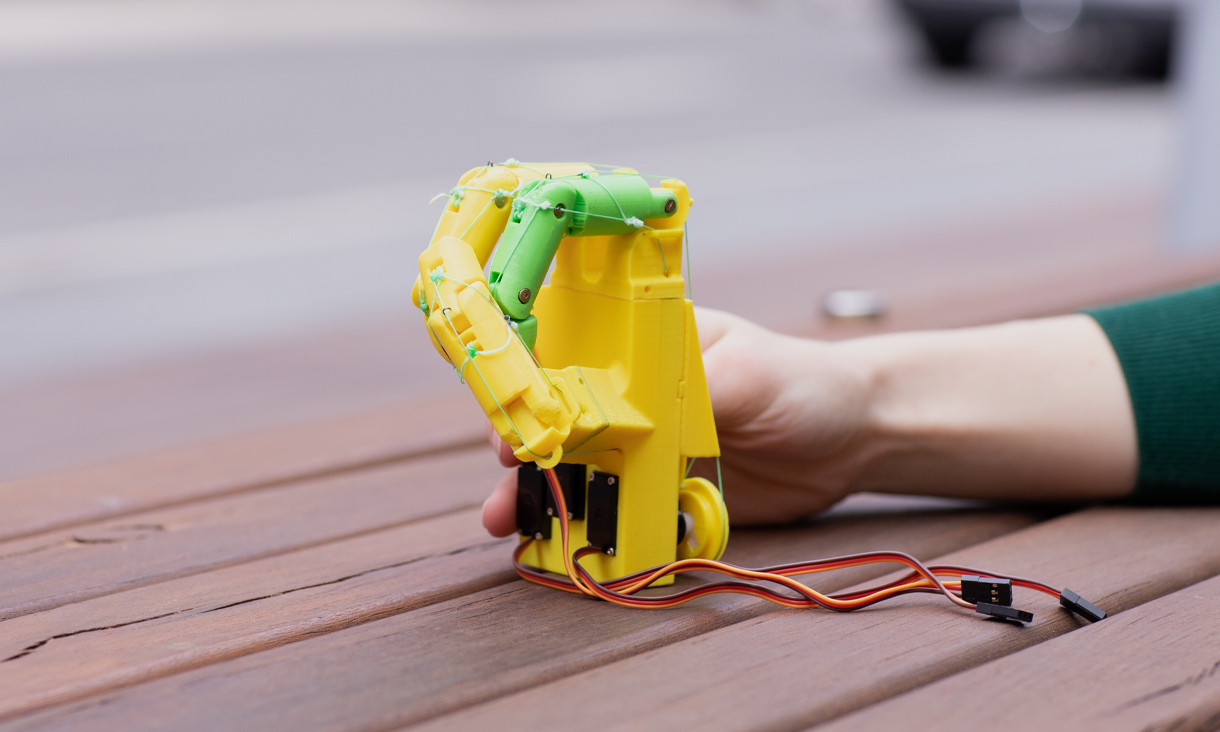 The 3D prostethic hand model will be presented at EnGenius 2019

“The biggest challenge was getting the mathematical calculations right to predict the tendon movement, bistability – meaning the finger has two stable positions - and contact forces,” Meikle said.

“I worked with my supervisors and colleagues to overcome these mathematical challenges and I now have a fully functional simulation within the computer program MATLAB.”

She will present the 3D model, which mimics the human tendons, muscle, and bone structure, and will present the three-digit hand, capable of gripping objects passively through the tendons, at EnGenius on Wednesday.

Weathering the storm of displacement 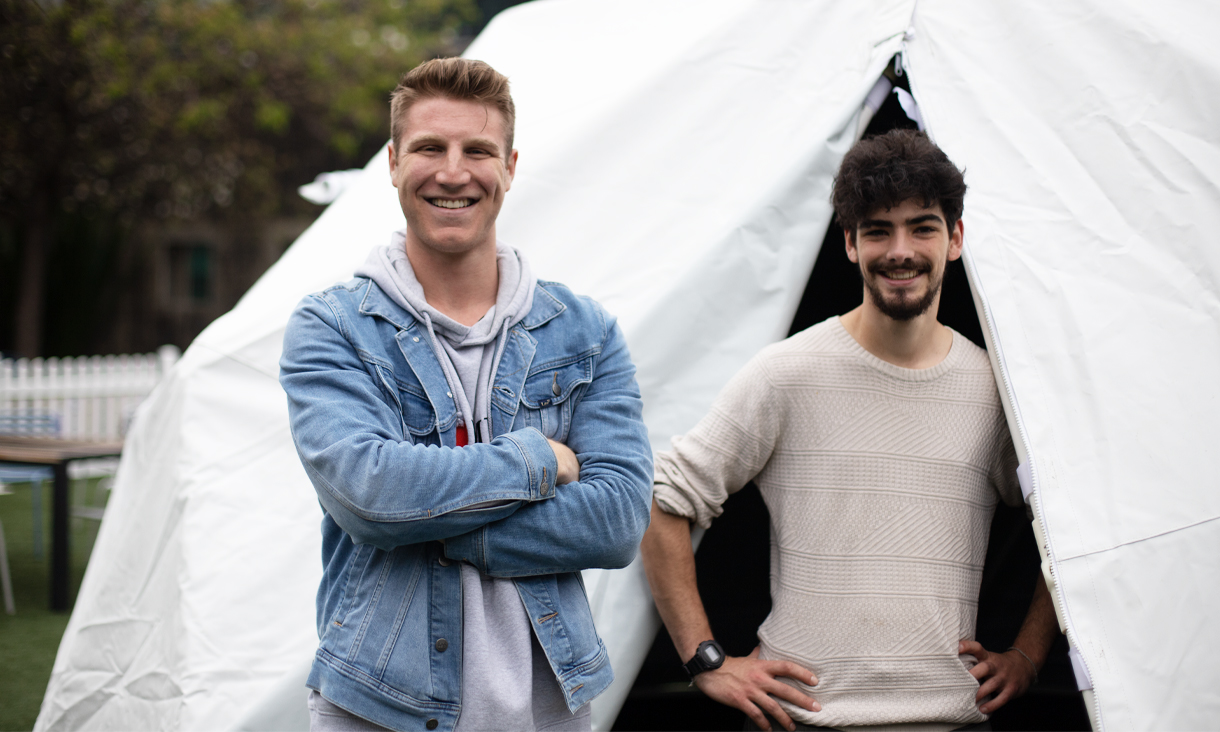 L-R: Civil engineering students Shaun Infantino and Theo Mimoun, part of the group who designed and produced the post-disaster shelter

Each year around the world, thousands of families are displaced from their homes due to natural disasters.

It was a problem Bachelor of Engineering (Civil and Infrastructure) (Honours) Theo Mimoun saw first-hand when he was in Vietnam last year on an internship organised by RMIT, and witnessed the power and destruction of tropical storm Pabuk.

Determined to find a solution, the trip became an inspiration for Mimoun and four other students to design and develop a temporary shelter design as part of their final-year project.

“We told ourselves, ‘If we can build these people a shelter, they can focus on building a better life,’” he said.

The five square metre shelter was designed to be easily set up by two people within 30 minutes and can be made as small or large as needed using the same core components.

“Our main challenge was developing a concept that was simple, strong and cost-effective,” Mimoun said.

“It involved numerous design iterations, countless hours of research and many sleepless nights. We got there and are excited to present the shelter at EnGenius.”

The design is more robust and substantial than existing options on the market – capable of resisting cyclone winds and being constructed on hard surfaces, soil, and sand. 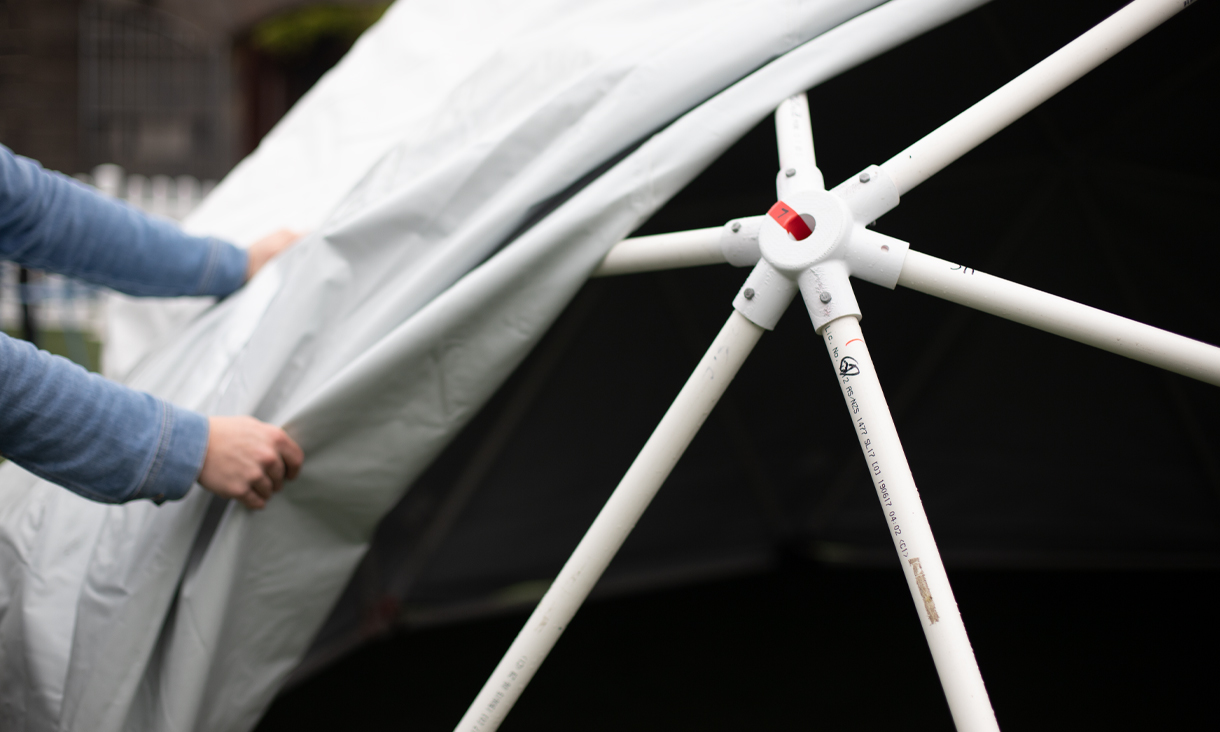 With industry professionals already expressing interest in the concept, the group planned to continue to develop the prototype and turn it into a viable product.

“This has become a passion project for us,” Mimoun said.

“We are looking forward to the next stage of our venture to help displaced people build their lives back together after disaster.”

Executive Dean School of Engineering, Distinguished Professor Adrian Mouritz said RMIT was proud to produce the next generation of engineers who were designing solutions to real world problems.

“EnGenius takes engineering out of the classroom and brings it to life,” he said.

“Visitors to EnGenius can see and interact with more than 350 innovative student projects, from prosthetic fingers that can be extended and flexed to a lightweight shelter that can be set up quickly after a natural disaster.

“Many of these projects focus on making our world a better place, be it more inclusive or more sustainable.”

Mouritz said RMIT was committed to preparing students for life and work.

“Industry has been central to our identity for more than 130 years,” he said.

“Meaningful partnerships and events like EnGenius provide opportunities for industry to meet its future workforce and students to connect with employers.”

Plumbing and built environment students are being introduced to a virtual welding simulator, as part of RMIT’s commitment to blended learning strategies and leading-edge technology implementation.