The 2013 Dhaka garment factory collapse is the clothing industry's worst ever industrial incident. Not enough has changed for garment workers.

The 2013 Dhaka garment factory collapse, killing more than 1,100 workers and injuring 2,600 more, is the clothing industry’s worst ever industrial incident.

It is not just the body count, though, that made the collapse of the Rana Plaza, a nine-story building in the Bangladeshi industrial city of Savar (near Dhaka) capture global attention (briefly) and spur activism around the world to improve the treatment of garment workers.

This had been an accident waiting to happen. Structural cracks in the building had been discovered the day before. Businesses on the lower floors (shops and the bank) were closed immediately.

The five garment factories on the upper floors made their workers keep working. On the morning of April 24 2013 there was a power outage. Diesel generators at the top of the building were turned on. Then the building collapsed. 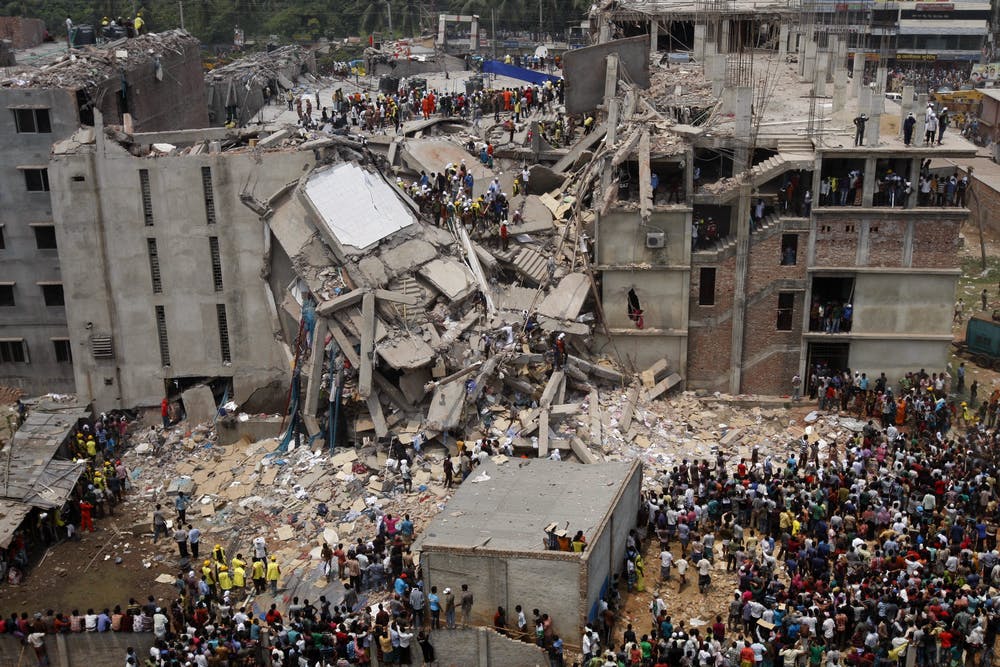 Rescue workers search for survivors in the ruins of the collapsed Rana Plaza building on April 25 2013. Abir Abdullah/EPA

The official death toll is 1,132. But these things are never clear-cut. That number doesn’t include, for example, Nowshad Hasan Himu, a volunteer who spent 17 days in the rescue work that pulled more than 1,000 survivors from the rubble.

Some could be only be freed by amputating limbs. Himu rescued dozens alive, and also moved the dead. On April 24 2019, the sixth anniversary of the disaster, he committed suicide.

The Rana Plaza collapse briefly shone a spotlight on the underbelly of the global fashion business, a US$2.4 trillion industry that employs about 40 million of the world’s poorest workers, often in dangerous and degrading conditions.

About 4 million of them are in Bangladesh, the second-biggest “ready made garment” exporter in the world, after China.

Activist groups such as Clean Clothes Campaign lobbied for compensation for the victims – many still suffer from their injuries – and better conditions for garment workers generally.

For this was no isolated incident. Garment workers routinely died in factory fires and faced other dangers. 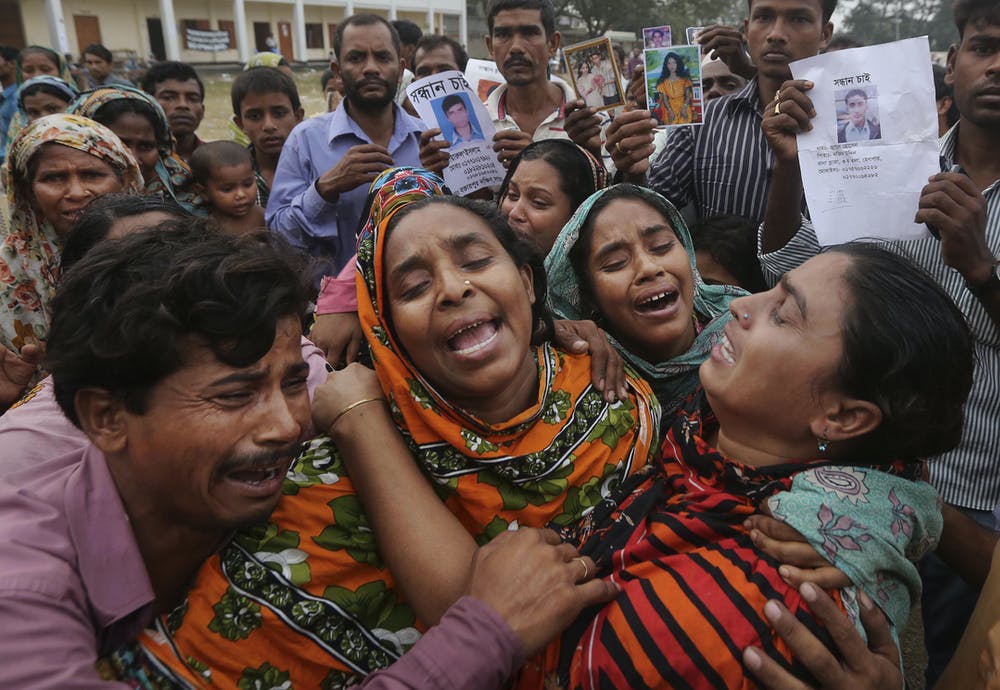 Relatives arrive to collect the body of garment worker Mohammed Abdullah on April 27 2013 at the makeshift morgue set in a schoolyard near the Rana Plaza site. Kevin Frayer/AP

At least 29 global brands were identified as doing business with one or more of the five factories in the Rana Plaza building.

Each was “a complicit participant in the creation of an environment that ultimately led to the deaths and maiming of thousands”, said Clean Clothes Campaign. Yet the problem was far wider than just those brands. It was a systemic problem. In a sense every shopper choosing clothes on the basis of cheapest price was complicit.

The industry vowed to do better. Within a month 222 companies signed the Accord on Fire and Building Safety in Bangladesh, a legally binding agreement meant to ensure garment workers had safe workplaces.

Things have improved. But not enough. Eight years on, the fundamental problems in global supply chains – the disconnect between profits, accountability and responsibility – remains.

This disconnect was glaring when we interviewed Bangladesh manufacturers and Australian retailer in 2018 as part of our research.

Retailers maintained they were living up to their obligations by only sourcing garments from manufacturers complying with the Accord on Fire and Building Safety in Bangladesh.

But manufacturers told us their compliance was often a charade. As one said:

Changes brought in after Rana Plaza, such as limiting the worker overtime hours and availability of a nurse and a childcare worker in the facility, are often only done for the day of auditing.

The reason: to keep costs low. As another manufacturer said:

Though we are complying to the rules established by the retailer to promote safe production practices, price and quality still plays an important role in getting the orders.

Here’s the problem illustrated in terms of a T-shirt.

According to Clean Clothes Campaign – an organisation backed by 230 unions, non-government organisations and research bodies – just 0.6% of the retail price of a t-shirt goes to the worker.

The factory owner takes 4% as profit. The brand label takes 12%. But the retailer takes 59%.

These numbers are, of course, averages. They don’t claim to be the exact profit split for every shirt. But they do give a fair impression of how the system is weighted.

Next time you see a t-shirt for less than $10, therefore, think about how much the maker made.

Improving conditions for workers must certainly involve internal reforms in Bangladesh, both through more stringent labour and health and safety laws as well as regulation and enforcement.

But easing the incessant pressure placed by buyers on suppliers to cut costs is also crucial.

Factory operators told us they wanted buyers to insist on better conditions for workers, and to pay enough to ensure that could happen.

They welcomed contracts that stipulating spending money on safer building and higher pay.

But it is the pressure to cut costs that has intensified with the COVID crisis.

Between March and June 2020, brands cancelled clothing orders worth billions of dollars to Bangladeshi makers.

By September more than 357,000 of the nation’s 4 million garment workers had lost their jobs, and many more were forced to accept lower pay. (Total textile exports for 2020 were down nearly 17%, according to the Bangladesh Garment Manufacturers and Exporters Association.)

In November 2020, Oxfam in partnership with Monash University published a report raising “serious questions about the commitment of brands to ensuring workers in their supply chains are paid living wages and work in decent conditions”.

Based on about 150 surveys and 22 in-depth interviews with industry stakeholders, it rated purchasing practices of Australia’s 10 leading fashion retailers. 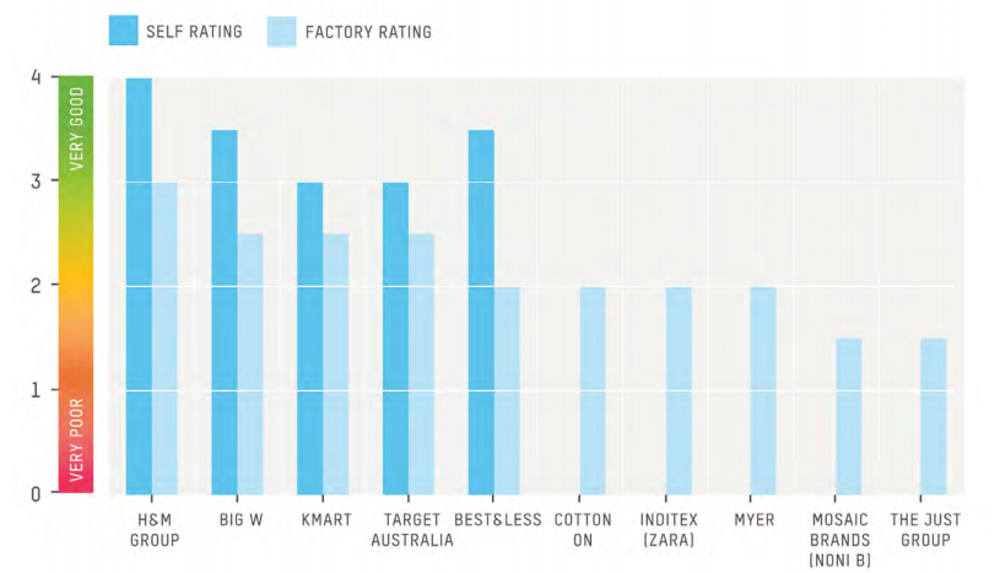 Overall, manufacturers rated H&M Group the best (3 out of 4). Big W, Kmart and Target Australia got 2.5. Best&Less, Cotton On, Inditex and Myer scored 2.

These two companies, along with Myer, also declined to participate in the research.

To solve the disconnect between profits, accountability and responsibility, retailers and brands must be much more closely involved in knowing and caring about what goes on in the factories they source from.

Dr Shams Rahman is a Professor of Supply Chain Management at the College of Business and Law, RMIT University.

Dr Aswini Yadlapalli is a lecturer in Supply Chain Management at the College of Business and Law, RMIT University.

RMIT has been named a partner of the New European Bauhaus (NEB) – a creative and interdisciplinary initiative of the European Commission aimed at designing new ways of living to build a sustainable, inclusive and beautiful future for all.

RMIT has signed a strategic partnership with Infinite Learning in Nongsa Digital Park, a high-profile tech hub supported by the Indonesian and Singapore governments.