Five years after launching the Centre for Innovative Justice, former Prime Minister Julia Gillard returned to RMIT for a wide-ranging discussion about politics, advocacy and reform. 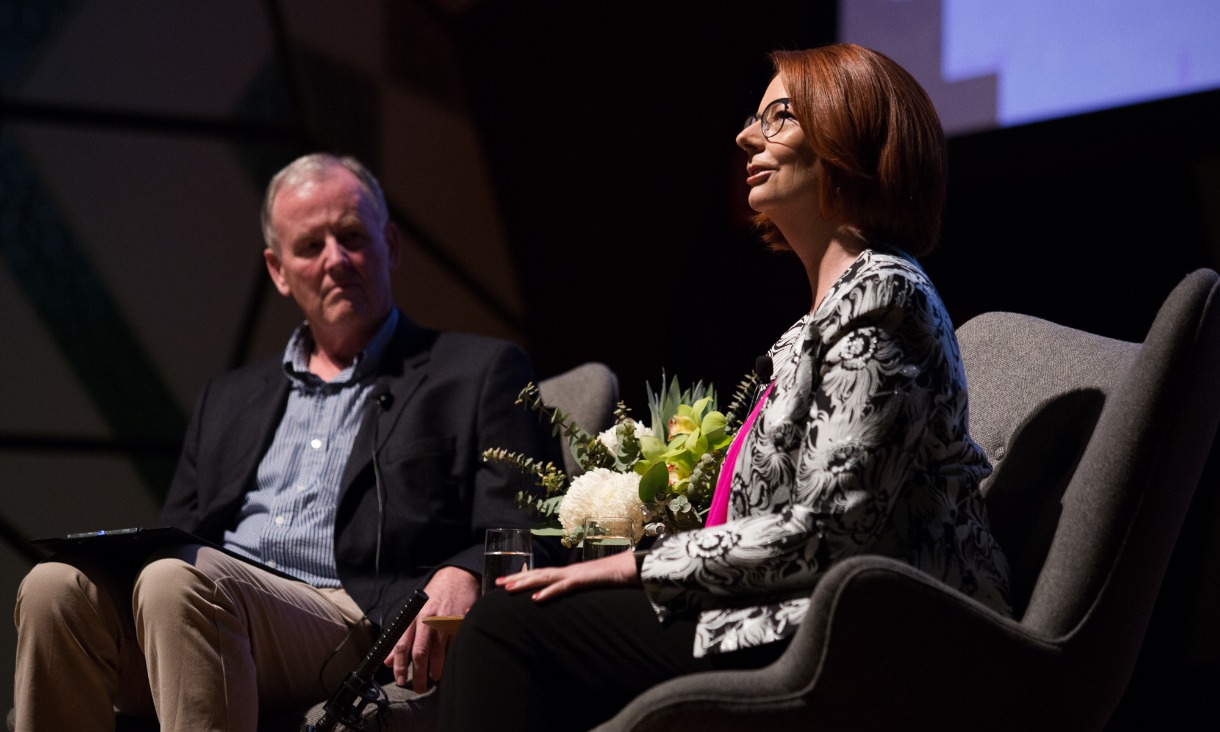 Kicking off the anniversary event, Vice-Chancellor and President of RMIT Martin Bean CBE reflected on the accomplishments of the Centre for Innovative Justice (CIJ), noting that organisations including Worksafe, the Transport Accident Commission, the Legal Services Board and the Coroners’ Court had engaged the CIJ to develop models of restorative justice.

“Over the past five years the Centre for Innovative Justice has advocated for and achieved reform in the areas of family violence, restorative justice, sexual offending, gambling and crime, as well as Acquired Brain Injury in the justice system, and multi-disciplinary practice,” he said.

Martin Bean noted the CIJ’s work in family violence which shone a spotlight on the perpetrators, and outlined ways the system could better hold them to account. The associated recommendations were adopted by the Victorian Government following the State’s Royal commission into Family Violence.

From that work stemmed projects that further established the Centre for Innovative Justice as a leading authority in the field and a go-to for justice systems looking to improve their practices.

Gillard was joined by Director of CIJ and former Victorian Attorney General Rob Hulls, with the discussion quickly moving to Gillard’s thoughts on leadership, government and global trends in politics.

The pair acknowledged the turmoil playing out in Canberra around the recent Liberal Party leadership spill as they spoke.

“When we see events like this in Canberra, it’s easy to think this is all about Australia, it’s is all about us, it’s all about a few personalities, but I actually think it’s connected to some big trends in global politics that are worrying and need to be thought through for the future,” Gillard said.

“On the conservative side of politics right around the world we’re clearly seeing a fracturing between pro-globalisation, small-l liberal tendencies and people who are more conservative and much more nation-centred, they want the globalisation to stop.

“That, I think, is an interplay in politics globally.”

As Australia’s 27th Prime Minister, Gillard was driven by a desire to improve the lives of working people and make society fairer – articulated in her own words as “work, education, respect”.

Now as the Chair of Beyond Blue, the Global Partnership for Education, and the new Global Institute for Women's Leadership, Gillard talked to her values and her vision to achieve change.

She said it was harder now than it had ever been to build and hold a political consensus for really deep-seated reforms.

“Not impossible…but it’s harder than it used to be,” she said, noting that Labor had managed it with some significant agenda items including Carbon Pricing and the National Disability Insurance Scheme (NDIS).

Gillard said her passion for enabling greater access to a quality education for all was what took her into politics.

“The only thing that will ever really sustain you is that sense of purpose,” she said.

Asked about her silence on government affairs since leaving politics, Gillard said she was very clear when she left politics that she wasn’t going to comment from the sidelines.

“That was then, this is now, there’s a lot of life to live and I’m getting on with it,” she said.