The Larry Perkins Trophy, developed through an RMIT / Australian Grand Prix partnership, has picked up an international design award.

Dr Scott Mayson accepts the accolade at the A'Design Award and Competition Gala night in Italy.

Launched in Melbourne earlier this year, it has now been honoured with a Gold Award at the International A’ Design Award and Competition, which recognises the best designs, design concepts and design-oriented products from around the world.

The opportunity to design and manufacture the trophy, which bears the name of each year’s Coates Hire Supercars Melbourne 400 winner, was offered to RMIT as part its education partnership with the Australian Grand Prix Corporation.

The creation was led by Senior Lecturer Dr Scott Mayson from the School of Design, with help from a multidisciplinary team of students and staff.

Mayson was in Italy to collect the gold award in the Prize and Competitions Design Award category.

“It was such an honour to see RMIT and Larry’s trophy recognised at this prestigious event, and a testament to all the hard work by the team and support from the Australian Grand Prix Corporation” he said.

“The final product is more than just a trophy – it's a physical demonstration of what we can accomplish when we collaborate across disciplines.”

“We used a series of different technologies with virtual reality to design and sculpt the form and then we used traditional manufacturing processes to finish off the final design procedure.” 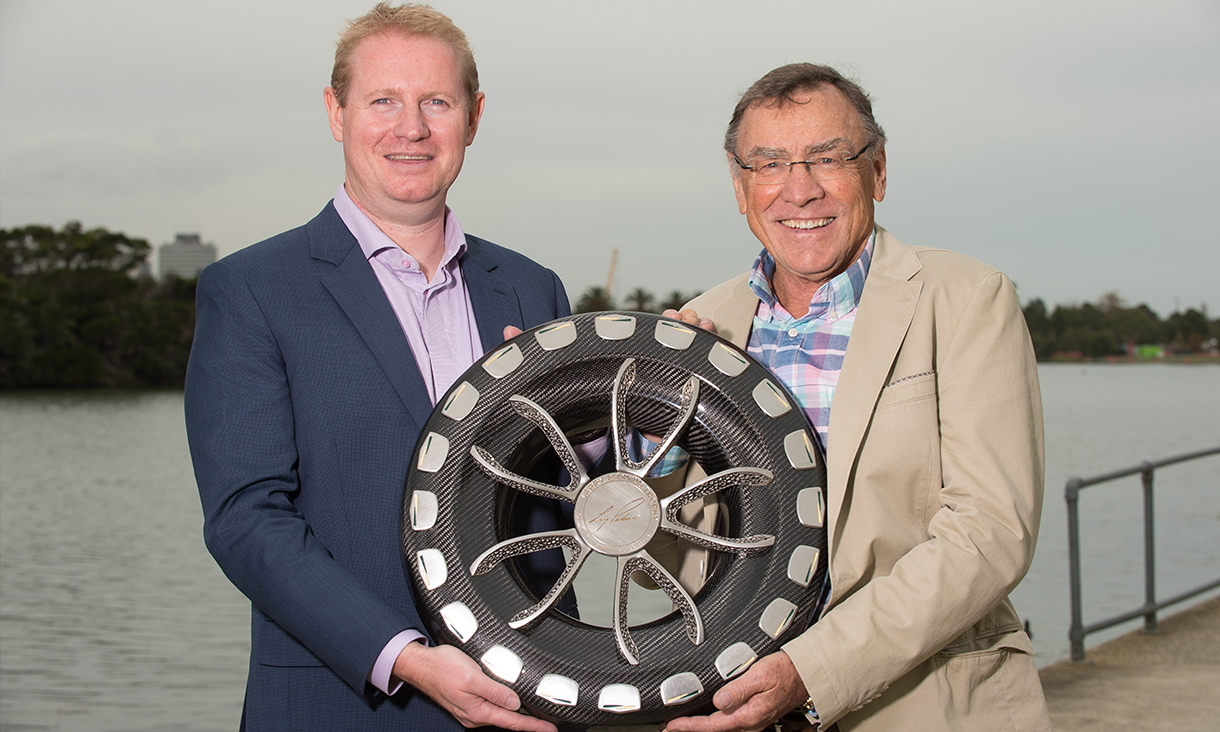 Staying true to the materials and techniques used in the manufacture of modern day race cars, the RMIT team used titanium and carbon fibre for the unique design and the trophy was created using 3D printing techniques at RMIT’s world-class Advanced Manufacturing Precinct.

“We are delighted to see the Larry Perkins Trophy win an international design award and it is sensational that this has come off the back of our strong partnership with RMIT,” Fletcher said.

“The collaborative efforts between the Australian Grand Prix Corporation, RMIT and Larry Perkins product was a fantastic outcome, and we hope to continue this creative and innovative approach with RMIT into the future.”

Larry Perkins, who had a successful career in both Supercars and Formula 1, called the finished product a “remarkable creation”.

“It’s truly an honour to have the perpetual Coates Hire Supercars Melbourne 400 trophy with my name on it, and it was made even greater on seeing the trophy,” he said.

Perkins is himself an engineer and founded the Perkins Engineering race team in 1985, so impressing him was no mean feat.

RMIT Vice-Chancellor and President Martin Bean CBE said the partnership with the Australian Grand Prix Corporation enabled the University to showcase its leadership, not only in design, but in harnessing disruptive new technologies.

“When a student comes to RMIT, they know they’ll get real industry connections and hands-on experience – this kind of collaboration is our promise made real,” he said.

The precinct highlights Victoria’s outstanding contribution to the automotive, defence, aviation and advanced manufacturing industries and is the ultimate learning hub for thousands of students, future innovators and entrepreneurs.