Study with us / Engineering / Benjamin Stylianou

Award-winning Bachelor of Engineering graduate Benjamin Stylianou is paving the way for alternative-fuel breakthroughs in Australia.

An extracurricular engineering competition and a final-year project about fuel conversion helped Benjamin, who’s currently working as a contract project engineer for South32 on Groote Eylandt in the Northern Territory, develop remarkably varied skills and set his career plans in motion.

Growing up on a farm near Launceston, Tasmania, Benjamin was introduced to all things mechanical when he was young. “I first became interested in engineering, primarily, when I was in my teens and I got to experience my uncle’s manufacturing factory. He’s an engineer who also studied at RMIT, and the idea of the machines, and what you could do with those machines, just fascinated me.

“Further into my teens I became a cyclist, quite competitively, and I remember working on bikes all the time with my grandfather. So that sparked an interest in the mechanical side of things. And of course, as soon as I got my licence, I got bitten by that car bug, and I’ve just been addicted to automotive engineering and engines ever since.”

Leaving the farm for the big smoke was “an experience and a half”, but moving to Melbourne to study engineering at RMIT, just like his uncle, was the perfect fit. “I love the idea of innovation. I like the idea of building something and making something custom, something that’s mine, and having a bit of an impact. Making life a little bit easier, if you like.”

At RMIT, this passion for customisation and innovation led Benjamin to mechatronics, a subject he became fascinated with during his second year at the Melbourne City campus. He chose to pick it up again during his final two years at the Bundoora campus.

“I remember not even knowing how to use a multimeter. We went from that sort of stage to learning how to code, to writing our own code, and then to building our own robot and, finally, competing. That was a big step. In six months, we went from not knowing anything about electrical or software engineering to being quite broad in mechatronics, and I kept going with that.”

From Lego® blocks to alternative fuels, Ben is making an impact in engineering. 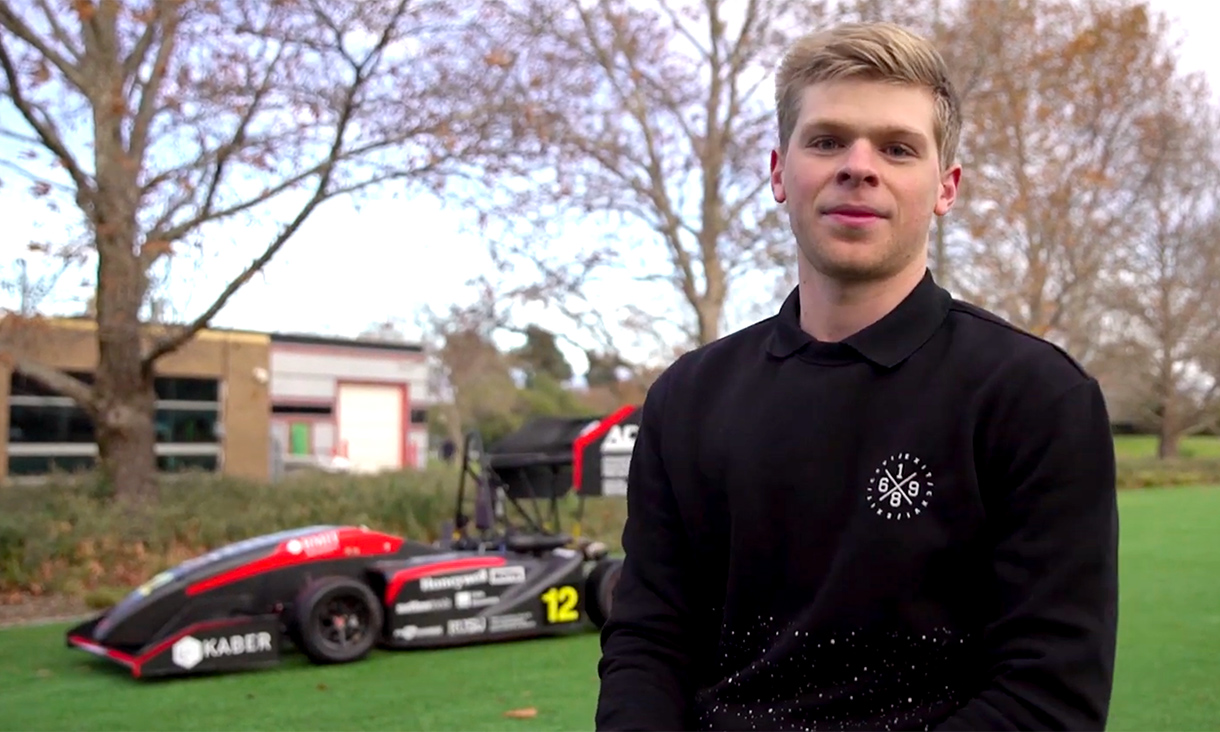 What's next for Ben Stylianou

For Ben, engineering means bringing his vision for the future to life by working on real-world projects in alternative fuels.

What's next for Ben Stylianou

For Ben, engineering means bringing his vision for the future to life by working on real-world projects in alternative fuels.

Benjamin pushed his learning limits through extracurricular activities, too. On top of mentoring third-year subjects and being part of a student consulting committee, Benjamin led RMIT Racing’s Powertrain and Electronics team as they designed, manufactured and raced the R18 FSAE combustion vehicle as part of Formula Student, the world’s largest student engineering competition.

“It’s designed to put all of your theory that you learnt in class into action. We actually got to do quite a bit of manufacturing, in terms of the carbon work. So the chassis and the aero package were all manufactured in-house here [at Bundoora]. A lot of the machining was done here, and even the testing of the car was done here.”

The hard work Benjamin put into his degree paid off in 2018, when he won the Deputy Vice-Chancellor's Undergraduate Prize, an award given to the best student in their final year of an undergraduate engineering program for consistent academic achievement and positive contributions to student life.

But it was Benjamin’s final-year project that kickstarted his desire to work to find alternative fuel options. “What we were working on was a diesel engine, converting it to spark ignition and running alternative hydrogen-based fuels in it, such as propane and ammonia. Where we were sort of pushing for was an engine that could completely run on ammonia and still satisfy today’s economy and power requirements. Finally, at the end of the year, I got to run it on ammonia, and it was an amazing feeling to have that engine turn over. I was there with my supervisor almost in tears that it ran.”

Now, Benjamin is keen to continue studying and become an instigator of positive change in his field, particularly with alternative fuels. “I would really like to make an impact on Australia, and even the world, in this sort of market, because I really do believe there is a future for this, and I do enjoy learning.”