For migrant and refugee students who can demonstrate financial and/or educational disadvantage; worth up to $7,000.

This scholarship offers $7,000 for up to the standard full-time duration of the program.

Current or former refugees are encouraged to apply. 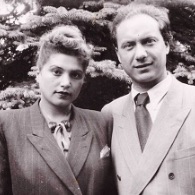 This scholarship is in honour of Sam and Nina Narodowski, who migrated to Australia in 1950 as refugees.

Born in Poland in 1920, Sam was a bright student and was accepted to Warsaw University despite a limited quota on Jewish students. He studied electrical engineering. As a Jewish student, he was forbidden to sit during lectures and had to stand with the other Jewish students at the back of the class. His studies were interrupted by the outbreak of World War II. At the end of the war, having learnt that his entire family had been murdered by the Nazis, Sam headed to the displaced persons camp in Munich. It was there that he met Nina, who was born in Vilnius in 1928. While still at school, her world was also shattered by the outbreak of war. Her family managed to flee the Nazis and find refuge in Kazakhstan. Sam and Nina married in 1947, migrated to Australia, settled in Melbourne, took a loan and built a successful knitwear business.

Fully understanding how political and racial hardships can impact one’s life, their family are honouring their memory by providing scholarships to undergraduate students of migrant or refugee background.

Quotes from past recipients:

"Receiving this scholarship helped me in boosting my energy and motivation towards studying as there was less stress of working. Due to the recent pandemic I felt very overwhelmed and anxious as I was witnessing my family struggling with financial difficulties, however, using this scholarship to help them with living expenses made me feel extremely happy and at ease." - Bachelor of Applied Science (Psychology)